(RNS) — As Christian churches cancel in-person services to avoid contracting or spreading the novel coronavirus, many have rushed to embrace “virtual” Communion: Some celebrate via livestream; others encourage parishioners to bring their own bread to Zoom videoconference meetings; and at least one United Church of Christ minister is upping the frequency of his online Communion because “our people need normalcy.”

But with churchgoers still holed up in their homes to avoid infection for weeks and even months to come, Christian leaders are starting to ask: Is Communion appropriate for cyberspace?

Clergy have expressed a variety of opinions on the topic in recent weeks, sparking debates — including among leaders within the same tradition.

Some challenge whether it should (or can) occur at all. For traditions such as Catholicism, where physically engaging with the Eucharistic bread and wine has long been a core part of the faith, parishioners have mostly taken to watching livestreams of priests celebrating Mass alone with the expectation of eventually returning to church to participate in the sacrament.

In the meantime, the Archdiocese of New York is encouraging believers to recite a prayer as an act of “spiritual communion,” which leaders defined as “an ardent desire to receive Jesus in the Most Holy Sacrament and lovingly embrace him at a time or in circumstances when one cannot receive Him in sacramental Communion.” Catholic priest Jesus Higueras from the Santa Maria de Cana parish is seen on a smartphone during a livestreamed Mass in Pozuelo de Alarcon, on the outskirts of Madrid, on March 15, 2020. (AP Photo/Bernat Armangue)

Similarly, last Friday (March 20), the Evangelical Lutheran Church in America issued guidelines discouraging online Communion, suggesting instead that parishioners “fast” from the practice during the pandemic.

“We recommend that we do not urge people to employ virtual Communion, that deacons, pastors, and bishops use this time as a teaching moment about the Lutheran understanding of the Word of God, and that we make use of the Service of the Word and Morning Prayer, Evening Prayer, Night Prayer and Responsive Prayer,” the recommendations read.

Others have shifted their stance as the effects of the global COVID-19 outbreak drag on. Leaders of Presbyterian Church (USA) initially suggested in early March that pastors should avoid performing the ritual online, pointing to resources that presumed in-person Communion as the norm. But on Friday (March 27), the PCUSA’s Office of the General Assembly did an about-face: It published a new advisory opinion condoning the use of virtual Communion in the event of an “emergency” — a category that includes a global pandemic. 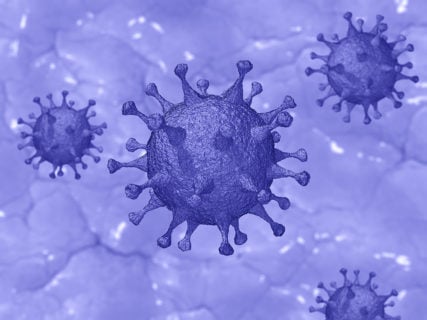 An illustration of the coronavirus. Image by Pete Linforth/Pixabay/Creative Commons

“In emergency circumstances there may be situations in which the pastoral needs of that moment require that the church take actions that run contrary to normal practice,” the opinion reads. “During an emergency or a pandemic in which the church is unable to gather or advised not to gather in person for reasons of public health, a congregation’s session may determine that this includes observing Communion online.”

Some don’t appear in a hurry to come down either way. A representative for the Episcopal Church said denominational leaders are currently working on “theological reflections” regarding online worship, with the intention of publishing them in the coming days.

Meanwhile, the United Methodist Church is drawing upon past debates to draw new conclusions. UMC leaders formed a task force specifically to address the subject of online Communion in 2014 that produced guidance for pastors pointing out issues with the practice and recommending that clergy strive to keep the practice grounded in the physical world.

But with the onset of COVID-19 and calls for social distancing, Bishop Kenneth Carter of the UMC’s Florida Conference — who chaired the task force — has now given permission for clergy in his region to take the sacrament online.

“We have given that permission with the guidance that this is an extreme situation to meet pastoral and missional needs,” he told Religion News Service on Friday. He noted that UMC bishops in Ohio have also granted clergy in their regions permission to conduct online Communion, which they described as a “symbolic way of allowing the body of Christ to share in the Lord’s Supper.” An individual holds a Communion wafer and wine. Photo by Dadion Gomez/Pixabay/Creative Commons

Carter said the practice not only helps church leaders to maintain Christian community in a time of mass isolation, but also aids people who may be hospitalized or quarantined, making it impossible to physically participate in the sacrament.

Besides, he said, churches were doing it anyway.

“This was not driven by denominational officials handing down an edict,” he said. “It came from congregations.”

Still, the allowances come with caveats. Carter was quick to note that he permitted the practice in Florida, “knowing that there are some who simply do not see this as an appropriate expression of community.”

And in Ohio, bishops insisted that permission to conduct online Communion in the midst of a global pandemic “is not a license to continue this practice when life returns to normal.”

There also remains some ambiguity across traditions as to what kind of online Communion is permissible. Some ministers simply broadcast themselves breaking bread and drinking wine, for instance, whereas others have encouraged those watching to join them in their own way.

But for now, Carter said, his priority is meeting the spiritual needs of fellow Christians.

“I’ve tried not to function like a regulatory agency,” he said. “This is a crisis.”