BOSTON (RNS) — On Sunday, Alex Merritt was signed in to the Zoom video conferencing app, discussing a biblical passage with members of his Sunday school young adults group at St. David’s Episcopal Church in Austin, Texas.

Then the trolls attacked.

“It was generally chaotic and impossible to stop,” recalled Merritt. “It was a huge wake-up call for me because I’m an elementary public school teacher, and I don’t want the children in my class exposed to any of the pornographic images that trolls sent us.”

The mass transition of houses of worship to Zoom and other online video conferencing platforms has meant that religious services are more accessible than ever before.

Unfortunately for digital congregants, that means they are also more accessible to online trolls who have plenty of free time to disrupt their services with obscene or hateful interruptions.

Merritt’s church group, which had to shut down its meeting and set up a new one, originally put a public Zoom link on its website. Now, the group will only send the link to members of its private Facebook groups, all of whom have been approved.

“I think places of worship need to be really careful when they put public Zoom links on their websites, especially if those links are to meeting spaces where there will be young children,” Merritt told Religion News Service. “Places of worship, ideally, want to be places that anyone can attend. At the moment, they need to balance this desire to be open to all who seek and the reality that there are folks out there who would sabotage these digital spaces.”

The epidemic of “Zoombombing” has spared no one, with trolls finding meeting links that have been posted online, then sharing and drawing graphic content on participants’ screens — leaving schools and universities, churches and synagogues alike with no choice but to close their meetings abruptly.

“My heart sank when I saw it happen,” said the Rev. Jason Wells, who had joined the People’s Forum event from Concord, New Hampshire, and saw the racist messages. “There are lots of great justice workers on that call and I felt deflated when I thought of how it would affect everyone there.” 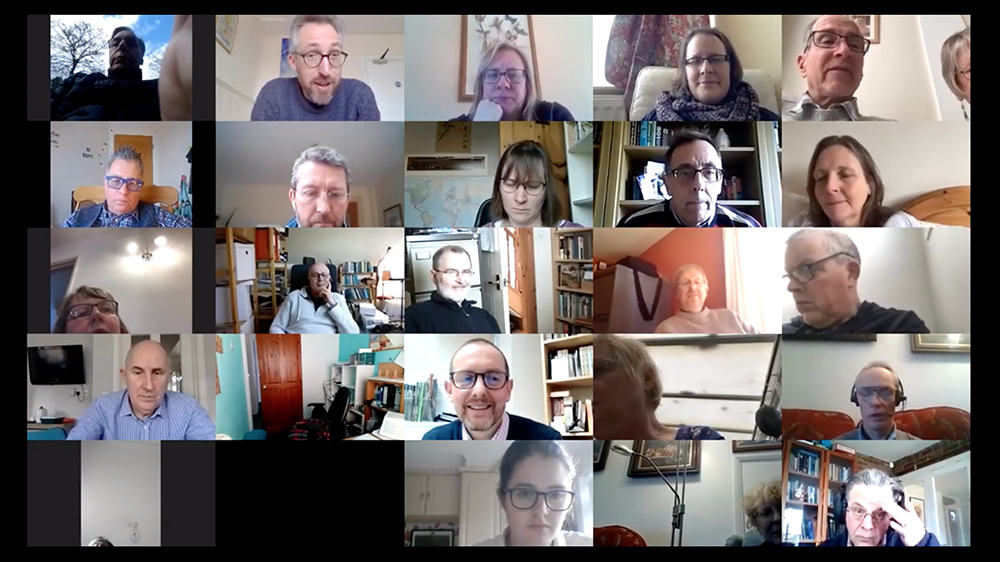 The view of participants using the Zoom app for a meeting. Video screengrab

On Sunday morning in Boston, the Rev. Laura Everett was on Zoom at Boston’s First Baptist Church in Jamaica Plain preaching about death when users from outside the church’s congregation hijacked the service.

After finding a link to the service, which Everett had tweeted so her followers could tune in to her sermon, the trolls began forcing racist and anti-LGBT hate speech onto participants’ screens.

The online ‘doors’ of the church were rightly open, and folk who have nothing better to do than come shout racist and anti-LGBT slurs to people trying to follow Jesus decided to enter,” Everett told Religion News Service. “It was heartbreaking…I believe the Church, wherever and however we gather, should be open to every weary soul. So we keep the Church doors’ open, in person and online and reserve the right to remove those who disrupt the peace.”

The disruption, which forced church leaders to stop the meeting and reconvened in a password-protected web conference when simply muting and removing the trolls did not work, left Everett thinking about “how something profound was broken and lost” for the congregation in that moment.

“Zoom is selling a product in their online platform and so has a responsibility to their users to ensure safe guards for our gatherings,” said Everett, noting that she knows pastors in California and Texas who were Zoombombed recently. “Zoom needs to do better, as we’ve seen these attacks on worshippers escalate.”

Combined with the desire to leave their churches’ doors open to the masses, many religious leaders’ newness with the technology means they struggle to protect their services from such disruptions.

Many faith-based organizations, including the United Methodist Church of New England and the Southern New England Conference of the United Church of Christ, have begun sharing tips with members for avoiding Zoombombing. Zoom’s own blog has published an extensive guide to the features that hosts can use to protect their meetings.

Gateway’s Director of Online Education made this brief tutorial on how to protect your church or small group from Zoom Bombers. If you are using Zoom for online education, social gatherings, or church functions watch this video: https://t.co/MfukNOIJ8q

“If you don’t advertise how to get onto the meeting it becomes much harder for people to join the meeting in the first place,” wrote David Sim, a trainee minister with the Church of Scotland who created a guide to preventing Zoombombing. “That may be counter-intuitive where we want to welcome all, so it may not be possible in every case – for example for our public worship where we want everyone to join. However, if you are having a business meeting, a Messy Church or a small prayer meeting, you can share joining details by email or text on a need to know basis.”

Merritt, who began researching ways to protect his students as he moved to distance learning, recommended that administrators disable screen sharing and annotations during meetings. Otherwise, any participant who joins the meeting can share the contents of their own screen or draw anything onto the shared screen.

He also urged houses of worship to enable Zoom’s waiting room feature so the host can approve folks to join the meeting and be ready to boot any unknown users out of the meeting.

And don’t forget to pray for those who harassed you, Merritt said.

While his own group was too harried by the intrusion to do so together, he said, “it seems like the obvious, Christian thing to do in retrospect!”