(RNS) — Inspired by a family in Georgia, a Christian movement to erect crosses decorated with Christmas lights during the pandemic has taken off nationally as a symbol of positivity and prayer.

As part of a grassroots initiative people are calling both Faith Over Fear and Faith Not Fear, lit-up crosses are appearing in front yards from Kentucky to Louisiana to Ohio. Local Facebook groups have sprung up in communities around the country for people to post photos of their crosses, with well over 20,000 members between them.

The movement sparked when Susan Polhill of Louisville, Georgia, decided to set up a cross at her home after hearing about families that set up Christmas lights to spread cheer in the neighborhood.

Polhill, who is giving away crosses made of bamboo and zip ties and encouraging people around the country to make their own crosses with whatever materials they have, said her project offers an alternative to Easter egg hunts, which may not take place this year due to stay-at-home orders.

It is also meant to show that prayer is the only solution to the pandemic, she said.

“We want anyone and everyone to join in,” Polhill told the Augusta Chronicle. “Through prayer, we come together as a community in faith, asking the Lord to heal our lands and give our leaders and medical people the knowledge they need. Dear Lord, hear our cries!” she said.

But the lit crosses have also drawn comparisons to the Klu Klux Klan’s burning crosses.

“The response I am getting from a lot of African Americans is, ‘how did they not see this looks like a burning cross?’” said Anthea Butler, associate professor of religious and Africana studies at the University of Pennsylvania.

Christian families in the South often put lights on a cross alongside a nativity scene or other Christmas decorations in December. But minus that context, “this is something altogether different,” Butler said, noting that the lighted crosses reveal how differently black and white Christians see the world.

After conservative commentator Erick Erickson posted a photo of a lighted cross in his yard on social media, he dismissed viral pushback comparing the image to ones of KKK members lighting crosses on fire. Some critics had also suggested the image was particularly insensitive because it was posted on the date of Martin Luther King Jr.’s death. 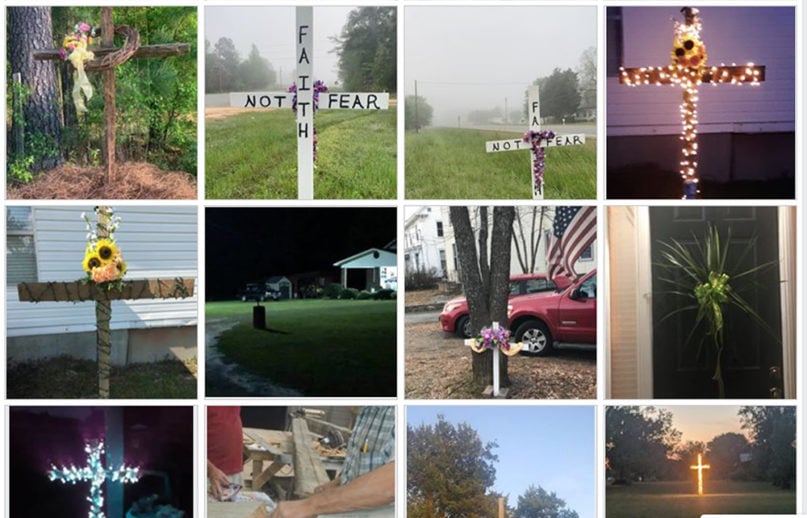 Photos posted to a Facebook group for Faith Not Fear Crosses in Johnson County, Georgia. Screengrab

“Thinking of adding more lights to the cross just to spite the trolls,” Erickson tweeted, later adding, “Wait till the people upset by my Christmas lights on the Easter cross find out what we Christians think will happen to them if they don’t accept Jesus as their Lord and Savior.”

Butler said those who put up the crosses may have had good intentions, but their own experience may blind them to how other people could see such a symbol.

“You have not talked with anyone who is not white,” she said.

It’s a lesson for white evangelicals, she said, about how other people see them in today’s divided America, especially at a time when many people are reexamining the ties that white Christians and white churches have had to racism.

“We cannot see them outside of the racism they have been involved in,” she said.

Historian Jemar Tisby, who leads The Witness: A Black Christian Collective, said the KKK imagery was not the first thing to come to mind when he saw the photos but understood the concern, suggesting people instead place a spotlight beneath the cross.

“The most charitable reading of the act is that people want to put their faith on display as a sign of hope right now,” he said. “That being said, we all need to pay attention to the context. And a lit up cross on the lawn would for sure bring the idea of the KKK to mind for some.”

While there is nothing wrong with a public display of a cross, Tisby said, the project is indicative of the “hyper-individualism” of white American evangelicalism.

“The whole campaign is indicative of a very individualistic approach to suffering and redemption,” said Tisby. “Putting a cross on your lawn is a bare minimum gesture that does nothing to alleviate the real harm and suffering that the virus started. If this is the sole way you’re working to spread hope, then it falls short.”

Tisby recommended the movement focus on charitable giving, particularly through working to close the health care gaps that have disproportionately impacted low-income families and communities of color.

Butler agreed Faith Not Fear’s message is misguided. Fear — at least the fear of God — can be the beginning of wisdom, she said. And right now, fear can save your life and the lives of those around you.

“Stay inside,” Butler said. “No one is going to be out at night to see that cross anyway.”