VATICAN CITY (RNS) — Pope Francis delivered his Easter message and blessing in an empty St. Peter’s Basilica today (April 12), sending a message of hope for those affected by the coronavirus and challenging world leaders to work together for the common good while addressing the pandemic.

“Dear brothers and sisters, indifference, self-centeredness, division and forgetfulness are not words we want to hear at this time,” Francis said after the morning Easter Mass at St. Peter’s Basilica on Sunday (April 12).

“We want to ban these words forever!” he added.

In his message, the pope described a world currently faced “with epochal challenges and now oppressed by a pandemic severely testing our whole human family.”

He called for a “contagion of hope,” inspired by the Christian faith in the Resurrection of Christ.

Francis spoke directly to world leaders, who are charged with enacting policies to help prevent the spread of the coronavirus.

“I encourage political leaders to work actively for the common good, to provide the means and resources needed to enable everyone to lead a dignified life and, when circumstances allow, to assist them in resuming their normal daily activities,” he said.

Francis mentioned the most vulnerable, the sick and the elderly as the first concern for global leaders in his address. He asked that the poor, the outcast, the refugees and the homeless not be abandoned. He expressed his closeness to the many victims of the disease and to the nurses and doctors who have put their life on the line in the service of others.

“This is not a time for indifference, because the whole world is suffering and needs to be united in facing the pandemic,” he said. 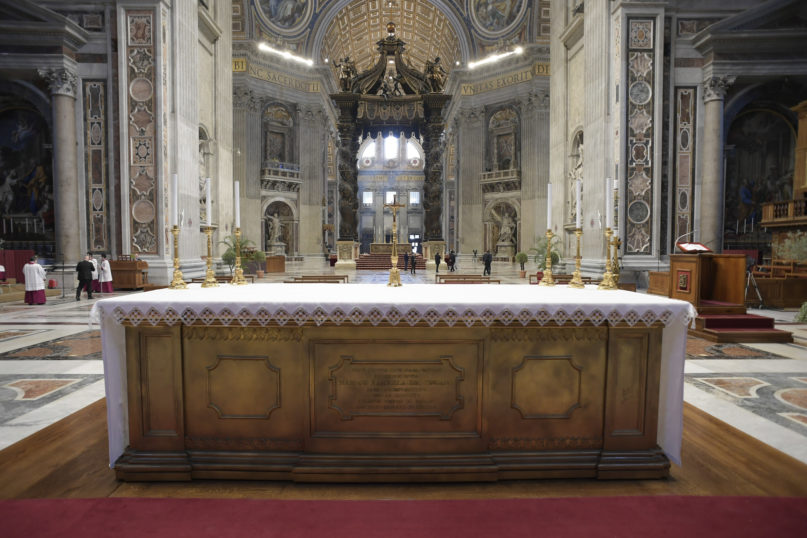 The altar is prepared for the Easter celebration, Sunday, April 12, 2020, at St. Peter’s Basilica at the Vatican. After Mass, Pope Francis offered his blessing and indulgence of sins and asked world leaders to come together. (Vatican Media)

Francis asked that “international sanctions be relaxed” as countries, especially developing nations, grapple with the challenge of the pandemic. He asked for “the reduction, if not the forgiveness, of the debt burdening the balance sheets of the poorest nations.

“This is not a time for division. May Christ, our peace, enlighten all who have responsibility in conflicts, that they may have the courage to support the appeal for an immediate global ceasefire in all corners of the world,” he said.

By asking for a global ceasefire and the loosening of sanctions, Pope Francis joins the appeals of the United Nations, which pointed to the financial vulnerability of countries like Iran, Cuba, Venezuela, North Korea and Zimbabwe.

Francis called out the nations who continue to manufacture and deal in arms despite the pandemic. He mentioned “great bloodshed in Syria, the conflict in Yemen and the hostilities in Iraq and Lebanon.” The pope asked that Israelis and Palestinians resume peace talks. He asked for the end of suffering in the Eastern regions of Ukraine and the end of terroristic attacks in many African nations.

“This is not a time for forgetfulness,” he said. “The crisis we are facing should not make us forget the many other crises that bring suffering to so many people.”

Francis mentioned humanitarian crises in Mozambique, Libya, Venezuela, Turkey and Greece. He mentioned especially the Greek island of Lesbos, site of his first foreign trip as pontiff in 2013, which houses numerous refugees seeking a home in Europe.

“This is not a time for self-centeredness,” the pope added, referring to Europe especially. The European Union, which began to dismantle when the United Kingdom exited the union Feb.1, is further weakened by rivalries among member states regarding the handling of the crisis.

Francis recalled how Europe was able to recover and “rise again” from the deep divisions that provoked the Second World War.

“It is more urgent than ever, especially in the present circumstances, that these rivalries do not regain force but that all recognize themselves as part of a single family and support one another,” he said.

“The European Union is presently facing an epochal challenge on which will depend not only its future but that of the whole world.”

Francis called leaders to find creative and innovative solutions and resist the “selfishness of particular interests and the temptation of a return to the past.”

In his blessing, the pope may have spoken directly to world leaders, but his first thoughts were for those directly affected by the coronavirus. Not only those on the front lines in the fight against the pandemic but also those who suffer financially, personally or religiously by not having access to the sacraments.

“May Christ, who has already defeated death and opened for us the way to eternal salvation, dispel the darkness of our suffering humanity and lead us into the light of his glorious day,” he said, “a day that knows no end.”