That legislation provides $350 billion for the Small Business Administration to extend loans to small businesses — and in a government reversal, churches and other houses of worship — facing financial difficulties as a result of the coronavirus shutdown.

The loans can be used to pay staff salaries — including for pastors —  and utility bills and are forgivable, meaning that houses of worship won’t have to pay all the money back if they keep their staff.

Moore, president of the Ethics and Religious Liberty Commission for the Southern Baptist Convention, said he saw no First Amendment or church-state entanglement associated with the loans.

In part, he said, that’s because banks would be issuing the loans, not the government.

The Southern Baptist Convention is the nation’s largest Protestant denomination with some 47,000 churches.

Still, Moore said in a Facebook Live interview with Jonathan Howe, vice president for communications at the SBC Executive Committee, it is up to individual Southern Baptist churches to search their conscience and decide if that’s what they want to do.

“There are some churches that don’t think you ought to borrow money at all,” he said. Or they may not like the idea that the government is backing it. In that case, he added, “that church ought to obey its conscience.”

Church-state separation groups as well as secular and atheist groups have objected to the provision in the CARES Act that allows for the loans, arguing that the government shouldn’t be paying pastors’ salaries, which in effect amounts to government-funded religion. 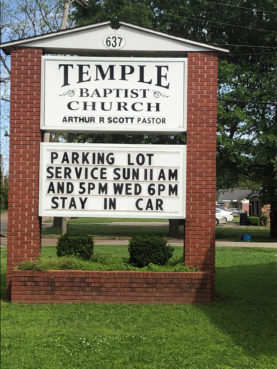 This image provided by Alliance Defending Freedom shows the sign for parking lot church services outside of Temple Baptist Church in Greenville, Mississippi, on April 9, 2020. The Justice Department has weighed in on a local Mississippi case involving a church that says its religious freedoms were violated. Temple Baptist has been holding drive-in services for congregants during the coronavirus outbreak. (Alliance Defending Freedom via AP)

Last week, a coalition of eight groups — including American Atheists, the American Humanist Association, the Center For Inquiry, the Freedom From Religion Foundation and the Secular Coalition for America — sent a letter to the administrator of the SBA objecting to the provision.

On the issue of church closures, Moore said most churches were complying with bans on mass gatherings in the midst of the pandemic. He pushed back on the idea that those bans unfairly single out religious services.

“The real news here is how few skirmishes we’re seeing between church and state right now in either direction,” Moore said.

And he said the case in Greenville, Mississippi, where the city attempted to shut down drive-in religious services was even more egregious.

But he also said churches ought to try to work things out with the government, which may not always understand exactly what churches are doing.

“It’s not a violation of religious liberty for the state to use its police power towards social distancing,” he said. “But it has to be consistently and fairly applied and it can’t single out churches or religious organizations as opposed to other groups.”

Earlier this week, Moore and eight other evangelical leaders urged the Trump administration to release people from immigration detention facilities “who do not pose a threat to public safety” during the coronavirus pandemic, saying it would help staff as well as detained migrants stave off infection.

Moore also cautioned churches that social distancing may not come to a quick end but may instead taper off gradually.

“There are going to be some practices that even when we’re back in church that for a while aren’t going to happen, like having people greet one another with a handshake,” he said. “That’s not going to be wise when we’re able to congregate together until we have a vaccine.”

(This story has been updated to correct Jonathan Howe’s title.)