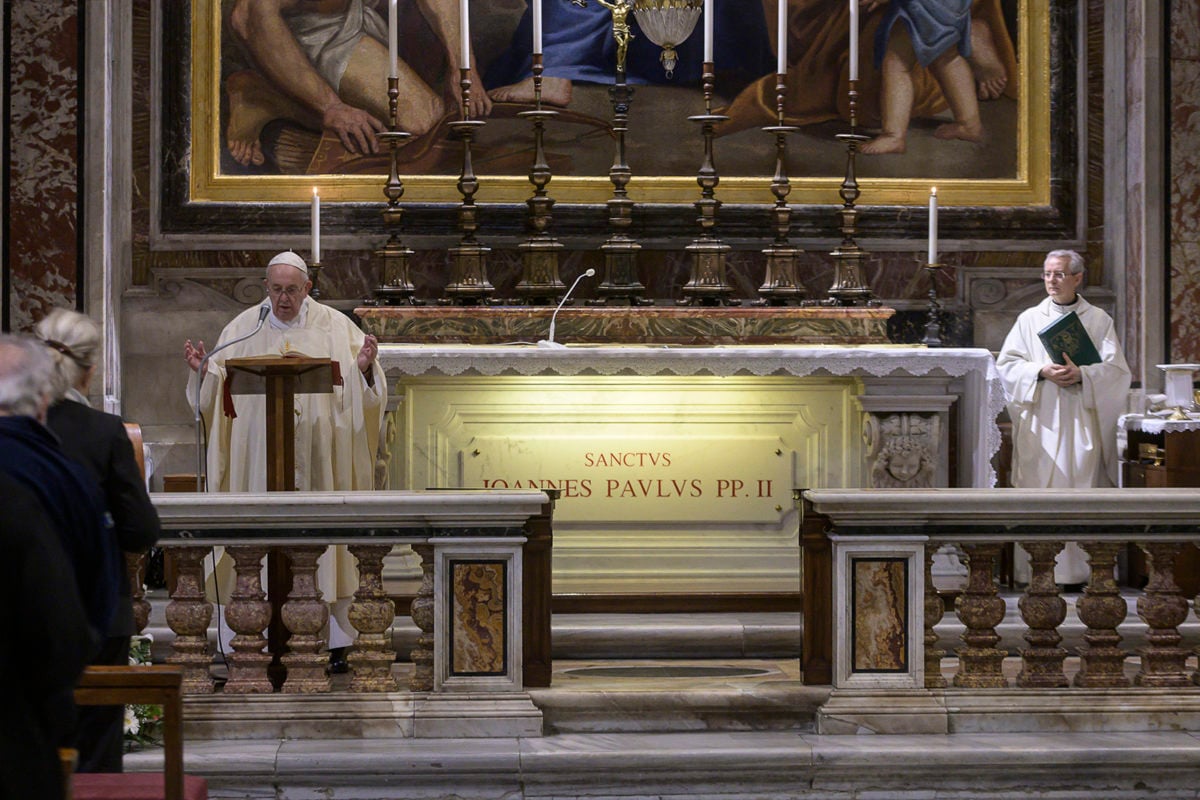 Pope Francis, left, celebrates Mass in front of the tomb of his predecessor, Pope John Paul II, on May 18, 2020, on the centenary anniversary of the birth of Pope John Paul II. Photo by Vatican Media
May 19, 2020
Claire Giangravé

VATICAN CITY (RNS) — While setting one pope against another has become a bit of global phenomenon as of late, the centenary commemoration of the birth of Pope John Paul II on Monday (May 18) highlighted continuity instead of contrast.

At his first public Mass since the global COVID-19 lockdown, Pope Francis celebrated before the tomb of his predecessor, the now St. John Paul II, and reflected on the legacy of the pontiff who galvanized the masses while helping to defeat communism.

As the world is faced with the aftermath of the coronavirus pandemic, Francis told faithful that God is never far from his people “in difficult times.”

“One hundred years ago, the Lord visited his people. He sent a man, he prepared him to become a bishop and guide the church,” he said during his homily to about 100 faithful in St. Peter’s Basilica.

Before moving to Rome and becoming pope, Karol Wojtyła lived in Poland under Nazi and then communist rule. As Pope John Paul II, he is credited with playing a key role in thwarting communism in his native country and all of Europe.

Though today he is considered a favorite among many Catholic conservatives, due to his strong stance in support of the traditional family and life issues, John Paul II had his fair share of opposition during his pontificate. His efforts for interreligious dialogue, such as when he kissed a copy of the Quran in 1999, caused significant backlash. 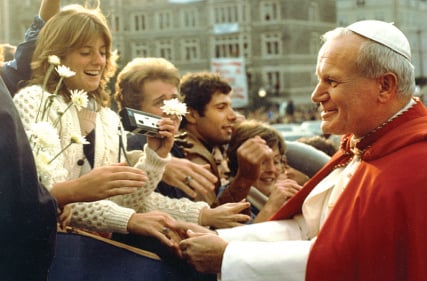 Pope John Paul II greets students at the Catholic University of America during a 1979 trip to Washington. Photo courtesy of the Catholic Standard, newspaper of the Archdiocese of Washington

“If today we have the possibility of a peaceful encounter and finding common ground with various religions, it’s because of the path traced by John Paul II,” said Polish Monsignor Slawomir Oder, who led the petition for the sainthood of the Polish pope, during an online meeting with journalists on Friday.

Much has been said about the similarities and differences between John Paul II and Pope Francis. Both were outsiders in the Vatican, unlike Pope Benedict XVI, who knew his way around the Roman Curia and had led the Vatican’s Congregation for the Doctrine of the Faith.

The faithful who gathered at St. Peter’s Square for the conclaves of 1978 and 2013, which elected first John Paul II and then Pope Francis, shared that feeling of surprise when an unfamiliar cardinal was announced as the new pope. Their relative unfamiliarity seemed a blank slate for people’s expectations.

During his homily, Francis pointed to how John Paul II “was not detached from the people; on the contrary, he went out to find people and he went around the whole world, seeking the people, making himself close to them.”

Being a people’s pope is a common trait between the two pontiffs, who didn’t shy away from embracing crowds, meeting families and individuals, especially those suffering and in need.

After Mehmet Ali Ağca shot and wounded John Paul II as he entered St. Peter’s Square in 1981, the pope asked people to pray for the man who made an attempt on his life and kept an enduring relationship with Ağca’s mother and brother. “A pastor is close to his people,” Francis said during the Mass. “If he isn’t, he’s not a pastor; he is a hierarch or an administrator, perhaps a good one, but not a pastor.”

John Paul II’s commitment to being close to his flock, or “having the smell of the sheep” as Francis would put it, included constant travel to over 100 countries and recurring visits to the numerous dioceses of Rome in his role as bishop of the Eternal City.

A significant part of John Paul II’s legacy was creating a globalized papacy, which Francis not only incorporated into his pontificate but also expanded upon by appointing a growing number of cardinals from the global peripheries and making apostolic visits to the nations of the world.

Francis and John Paul II had two very different worlds to address but both faced it using the same tool. Catholic social doctrine, meaning the set of principles and teachings to guide society toward the common good, was implemented by both to promote justice in a global society.

John Paul II “was a man who wanted justice, social justice, justice for peoples, justice that casts away wars,” Francis said. “He was the man of mercy, because justice and mercy go hand in hand, they cannot be separated, they are together: Justice is justice, mercy is mercy, but you can’t find one without the other.” Pope Francis celebrates Mass in front of the the tomb of his predecessor, Pope John Paul II, on May 18, 2020, on the centenary anniversary of John Paul II’s birth. Photo by Vatican Media

According to Oder, their shared interest for Catholic social teaching is a “sign of the continuity between the two pontificates.”

“The personal life and origins of these two pontiffs, opposing a regime on one side and staggering poverty on the other, have made their hearts particularly sensitive to this theme,” he said.

Catholic social teaching was behind John Paul II’s fight against “the culture of death,” just as it underlines Pope Francis’ condemnation of today’s “throwaway society,” which he describes as one where everyone is treated as disposable, especially the weak and the poor.

Francis’ appeals for the care of creation, exemplified in his 2015 encyclical, “Laudato Si’,” finds a precedent in John Paul II’s love for nature, seen in the pictures of him immersed in majestic alpine settings and immaculate landscapes.

While many differences exist between these two popes, what they have in common bears lasting consequences and creates a “candle of holiness” to be passed down for future popes, Oder said.

“Different styles and ways of thinking mustn’t scandalize or worry, because everyone interprets the mandate of Christ with their own sensibility and lived experience,” he said.

“Despite appearances or suggestions of a rupture or fracture, I see a continuity of faith and of the charity of hope.”