(RNS) — The growing concern that Secretary of State Mike Pompeo got his inspector general fired to remove the threat of an inquiry into a Saudi arms deal should worry advocates of international religious freedom. The religious freedom movement has already mortgaged its bipartisan reputation to curry Pompeo’s favor. If he loses standing as one of the president’s closest advisers, it will have disastrous implications for persecuted believers around the world. Rather than rely so much on one person, the movement would do well to return to its bipartisan roots.

The international religious freedom movement’s fortunes have long depended on the attention it gets from the White House and top officials at State. In the 1990s, an ecumenical group of activists successfully pushed for the creation of a watchdog agency, the U.S. Commission on International Religious Freedom, and the appointment of an ambassador-at-large for religious freedom. Both were housed and supported by the State Department.

These developments were much needed. Despite the spread of democracy after the crash of the Soviet Union, oppression of people of faith, studies found, contributed to social tensions and violence. But the religious freedom movement struggled to keep its momentum in succeeding administrations. President George W. Bush downplayed the issue and President Barack Obama’s administration took its time nominating IRF ambassadors and releasing annual IRF reports.

This seemed to change after the 2016 election. Vice President Mike Pence pledged to make international religious freedom a priority, and President Donald Trump nominated former senator and Kansas governor Sam Brownback, well-known for his IRF advocacy in the Senate, as ambassador.

Pompeo also emerged as an essential conduit for the movement, implementing several initiatives to raise awareness of religious persecution and give the IRF advocates access to policymakers. The State Department has hosted two ministerials, gathering global religious freedom leaders in Washington to make common cause. Echoing IRF activists, Pompeo has spoken forcefully of religious freedom as America’s “first freedom.”

Now this “success” may be the movement’s undoing.

Tying itself to the Trump administration, specifically Pompeo, has come at the cost of politicizing the issue of religious freedom. When I was an active participant in the movement, we prided ourselves on advocating in a truly bipartisan spirit and criticizing Bush and Obama alike. 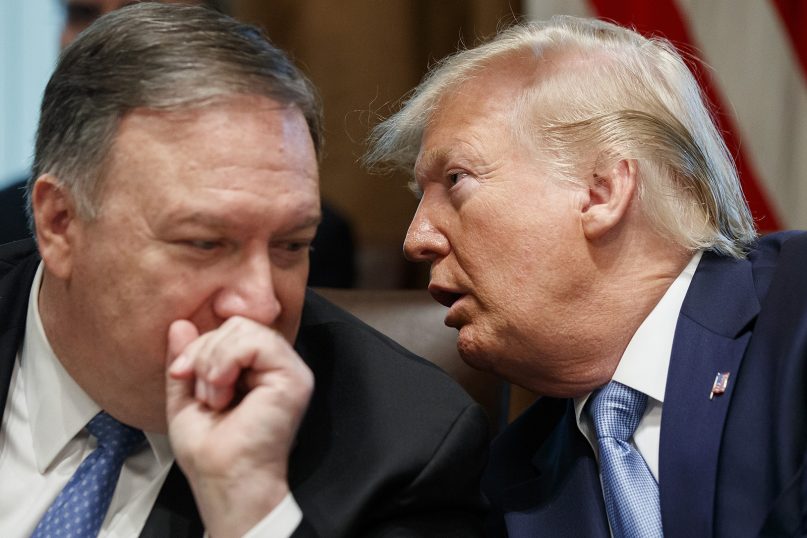 Secretary of State Mike Pompeo, left, and President Donald Trump whisper during a Cabinet meeting in the Cabinet Room of the White House on July 16, 2019, in Washington. (AP Photo/Alex Brandon)

This changed under the current administration. The movement seemed unconcerned when Trump loyalists were installed on the commission that is meant to be a neutral watchdog. Rather than a fighter for persecuted religious communities, USCIRF risks becoming a platform for allies of a conservative administration. Critics have been given fodder for their claims that IRF is slanted toward conservative Christianity and pushes U.S. interests.

This isn’t fair; the movement includes a vast array of religious groups and advances a principled, universal ideal. But the movement’s close ties to the Trump administration have made it harder for liberal IRF champions (like me) to make this point.

The IRF is in a tighter spot since news broke that the fired inspector general was looking into the possibility that Pompeo “fast-tracked” arms sales to Saudi Arabia to circumvent Congress. Pompeo had already overridden State Department experts on Yemen who, like many U.S. lawmakers, are concerned about the use of U.S. bombs by Saudi forces in the war-torn country.

Pompeo is being scrutinized for more quotidian corruption accusations as well, such as holding taxpayer-funded dinners for corporate and media elites or using State Department staffers to walk his dog, and none of the allegations are core to the administration’s religious freedom policy. But aiding a state with one of the worst religious freedom records in the world doesn’t square with the rights of religious minorities.

There have been other, similar embarrassments. Pompeo has claimed that Egypt’s el-Sissi regime, an egregious violator of religious freedom, has advanced his people’s right to practice their faith. The Rev. Johnnie Moore, a pro-Trump USCIRF commissioner, has explicitly praised Saudi Arabia’s “progress” on religious tolerance. The administration’s troubling statements and policies on Muslims makes its defense of religious freedom seem hypocritical.

The return for the movement, meanwhile, has been spotty. The administration has brought attention to China’s repression of Uighur Muslims but has had little success in changing that situation. It has highlighted the plight of Middle East Christians persecuted by the Islamic State group known as ISIS but has done little to restore these communities. There have been ethical lapses: Pence’s office has ignored standard guidelines for awarding aid to Middle East Christians and pushed out officials who objected.

It should come as little surprise that prizing access over principle would misfire. Leading a cause that transcends political divisions, the IRF movement’s biggest strength has always been its bipartisan nature. That strength is now faded. Why would Democrats bother to satisfy a movement loyal to the opposing party and tainted by alleged corruption?

It’s not too late to change this, however. The IRF movement can still condemn the Trump administration’s misdeeds and passivity on religious freedom; such a statement coming from a former ally in an election year would attract significant attention. The IRF movement should give a potential Biden administration as much benefit of the doubt as it has given Trump.

This movement can regain its respected reputation if its members act now to show they have one loyalty, to those persecuted for their faith around the world.

(Peter Henne is director of Middle East studies in the Global and Regional Studies Program at the University of Vermont. The views expressed in this commentary do not necessarily represent those of Religion News Service.)

Signs of the Times
What’s next for the US in Afghanistan? Four essential projects
Follow us on Facebook!
Submit your photos to RNS