(RNS) — Kneeling, in most of the world’s religions, is an act of worship and veneration for a deity or its mythic representatives. On Monday (May 25) in Minneapolis, a white police officer kneeled on the neck of a black man named George Floyd, who was already handcuffed, for as many as nine minutes. The officer kneeled on his neck as Floyd pleaded, “I can’t breathe!” The officer knelt there until EMTs arrived and took Floyd, now unresponsive, away.

A 10-minute video of the police killing went viral and by the end of the day, the four police officers who were at the scene, including the primary perpetrator, Derek Chauvin, had been fired. The FBI has been called in to investigate.

The video of Floyd’s killing is excruciating to watch. Witnesses can be heard pleading with the officers to allow him to breathe. The officer ignores the crowd’s entreaties, continuing to kneel nonchalantly on the man’s neck with his hands in his pockets, and does not move until the ambulance arrives.

The officer, as police often do in these situations, will likely insist that he feared for his life, that Floyd was resisting. Listen closely to the video and you can hear the other officers seeming to mock Floyd, claiming not to believe that he was in distress precisely because he was expressing his distress. However, a handcuffed prisoner lying on his stomach could just as easily and probably more painfully been restrained if the officer had knelt on the backs of his knees or his legs. Floyd was secure and the officer’s kneeling on his neck was unnecessary.

As it was, the officer appeared to be on his knees to pay reverent homage to the demon of hate and murder and fully intended to kill Floyd.

Since the 2014 police killing of Eric Garner on Staten Island in New York City, every police officer in America surely knows not to restrict breathing by kneeling or sitting on or chokeholding a victim while he pleads to breathe. By now, every training officer or retraining officer should have informed all police officers that someone who cannot breathe, someone who cannot draw air into her or his lungs, can still plead for breath while dying.

I will admit my baby care training kicked in when I first heard of the Garner case; I assumed that perhaps the officers may have been parents who had been informed by their pediatricians, “When they’re crying they’re breathing.” But within hours of Garner’s death, we learned from physicians questioned by the news media that when people cannot breathe, cannot draw air into their lungs, they can still say, “I can’t breathe!” as they struggle, unsuccessfully, to survive.

The video of Garner’s death, like the video of Floyd’s, is excruciating to watch. Police officers, refusing to argue and remonstrate with a man insisting he is being treated unfairly, take him down to the ground and then pounce on him like a pack of wild dogs — or rather, in their short pants, legs covered in tattoos, like racist white supremacists that we see in prison movies and television shows.

As Garner struggled to breathe, a grossly overweight and clearly out-of-shape uniformed officer added his weight to the pile of people on Garner, making breathing more difficult and hastening his death. His killing was similar to execution by pressing, once used against witches and heretics in Europe and America.

America needs to understand that when we see a white police officer kneeling on a black body, squeezing the breath of life out of that body, we are witnessing an act of worship. It is an act of worship that honors the demons of racist hate and murder — a form of veneration deeply rooted in the American nightmare that is the underside of the American dream. 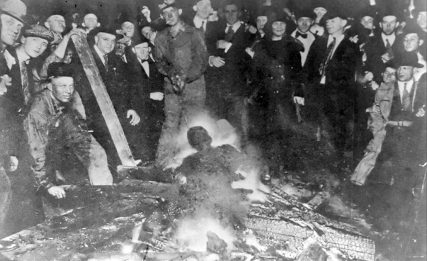 A white mob poses for a photograph around the charred corpse of William Brown after he was killed, mutilated and burned in Omaha, Nebraska, on Sept. 28, 1919. Photo courtesy of LOC/Creative Commons

Beginning at the end of Reconstruction, hate and racist murder defined the rise of terrorist organizations that sought to enforce white supremacy and the rise of Jim Crow. Large crowds attended lynchings, watching as the breath of life was choked and burned out of black men and women. The perpetrators celebrated their deeds by posing for pictures, pictures that were later sold and turned into postcards to be shared with friends and family.

Lynchings were sometimes advertised in churches as entire congregations turned out to participate. Those mob murders were not confined to the South; places like Coatesville, Pennsylvania, and Omaha, Nebraska, were the sites of these brutal events too.

The tradition of spectacular public race killings, with the photographic evidence to share them, continued through the first half of the 20th century. During the Great Migration and at the end of World War I, such events were so frequent that the NAACP dubbed the summer of 1919 “the Red Summer.” In too many cases, the lynchings and race riots proceeded with the tacit or explicit cooperation of Southern law enforcement.

Fleeing the violence of the South, black Americans landed in ghettos in the North, where policemen became principal agents of violent white supremacy. The officer who killed Floyd was unfazed by the crowd of bystanders memorializing the slaying with their cellphones. His exhibitionism is reminiscent of the lynch mobs who sought the visibility provided by photographers as they proudly displayed their dead black victims.

In a prayer penned for his students at Atlanta University in the first decade of the 20th century, W.E.B. Du Bois insisted, “Mighty causes are calling!” One of those causes, he opined, was “the putting down of hate and murder.”

Today, as another black man is gratuitously killed before a crowd of witnesses while unsuccessfully appealing to the humanity of a white police officer, we are reminded that the traditions of hate and murder are alive and well and actively venerated. We can see that the worship of the godling of racist hate and murder survives in the act of a Minneapolis police officer kneeling on the neck of a handcuffed man as he cries out, “I can’t breathe!”

(Cheryl Townsend Gilkes is an assistant pastor for special projects at the Union Baptist Church in Cambridge, Massachusetts, and the John D. and Catherine T. MacArthur Professor of African American Studies and Sociology at Colby College. The views expressed in this commentary do not necessarily reflect those of Religion News Service.) 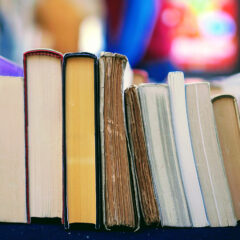