(RNS) — On Pentecost Sunday, after a night of unrest that swept the country in the wake of the brutal death of George Floyd at the hands of police, the Rev. William J. Barber II delivered what he called “a pastoral letter to America” urging that leaders hear — and heed — the calls for justice from blacks and other minorities.

Barber, a North Carolina Disciples of Christ pastor and co-leader of the Poor People’s Campaign, said Pentecost, which commemorates the descent of the Holy Spirit on Jesus’ apostles, is a time of discernment.

Floyd’s May 25 death is a moment when Americans ought to wake up to the ways systemic racism is “choking the life out of American democracy,” he said. He urged immediate reforms to make America more just, including universal health care, a living wage, sick leave and affordable housing — part of the platform he has long championed with his Poor People’s Campaign.

Speaking from the pulpit of an empty Greenleaf Christian Church in Goldsboro, North Carolina, Barber delivered a 40-minute message to cameras, connecting the death of the unarmed 46-year-old African American man from Minneapolis to the 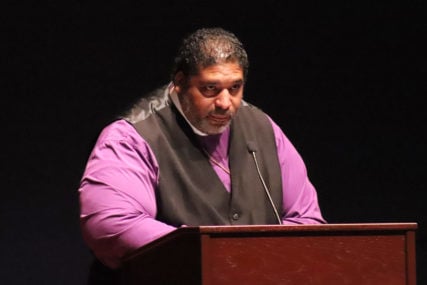 COVID-19 pandemic that has disproportionately killed African Americans and led to widespread unemployment and economic hardship.

“More than 100,000 people have said, ‘I can’t breathe,’ as this disease choked them to death,” Barber said, linking Floyd’s last words as he lay dying while a white police officer pinned him to the ground and pressed his knee to his neck.

Over the weekend, images of Floyd’s death captured on video sparked anger, protests and vandalism as clashes have erupted between the police and protesters in dozens of cities.

Barber said the image of the police officer with his knee to Floyd’s neck reminded him of game hunters posing in photos kneeling on their prey, triumphant in their success.

Over and over, he returned to the metaphor of gasping for air in referring to the protests that have wracked the country, describing them as “the inevitable reflex of a people who cannot breathe because their life is being systematically snuffed out.”

Barber urged prosecutors to file charges not only against the officer who directly caused Floyd’s death, but the other officers who stood by and watched.

But more urgently he reminded political leaders that moments of crisis require structural changes — such as those that ended slavery, gave women the right to vote and extended voting rights to African Americans.

He ended his talk urging elected officials to take the time to see and listen to the people’s cries rather than urge a quick return to order.

“We cannot try to hurry up and put the screams and the tears and the hurt back in the bottle, just to get back to some normal that was abnormal in the first place,” Barber said. “Hear the screams. Feel the tears. The very people rejected over and over again are the ones who have shown us the possibility of a more perfect nation. They are telling us these wounds are too much. This death is too much.

“If we listen to America, if we listen, then now is the time for us not to stop mourning, but to mourn and refuse to be comforted, to unite our collective moral power and demand transformative change right now.”