(RNS) — In my lifetime, I have never seen more white people involved in the deep and growing movement to address systemic racism, structural injustice on many fronts, and, specifically, the violent policing and killing of black people. Never. What does that mean? What will it change — and how?

Yesterday in Washington, D.C., up against police lines protecting the White House, Sojourners partnered with the Episcopal Diocese and others for a “Solidarity Prayer Vigil,” just up the street from St. John’s, Lafayette Square, where on Monday, militarized police teargassed and removed peaceful protesters from all around Lafayette Park and the church. Donald Trump did that so he could stride over for a photo op in front of the church, lifting a Bible over his head while having nothing to say, using both the sacred space of a church and our holy scriptures as political props. The whole nation and the world have now seen that infamous picture, and many have noted that the Bible was held upside down — both literally and, indeed, in all of its teachings.

There in front of the historic pale yellow sanctuary, known as “The Church of Presidents,” Trump was asked if the Bible he was holding was his own; he answered, “It’s a Bible.” Asked if he had any thoughts, Trump said, “We have a great country. That’s my thoughts. Greatest country in the world. We will make it greater. We will make it even greater. It won’t take long. It’s not going to take long. You see what’s going on. You see it coming back.”

Princeton professor Eddie Glaude Jr. has rightly named the violent White House walk to St. John’s as “dictatorial theatre.” The words that came to mind for many of us were sacrilege and blasphemy. Here’s the dictionary’s definition of blasphemy: “Impious utterance or action concerning God or sacred things.” Another word that came to mind was authoritarian. At the epicenter of political power in the United States stands a little church that Donald Trump has decided to violently use — and now St. John’s stands inside a police perimeter surrounding that seat of power.

The vigil yesterday, led by Bishop Mariann Budde of the Episcopal Diocese of Washington, Robert Fisher, the rector of St. John’s, and many other clergy and bishops, took place as thousands of mostly young people — diverse across faiths and ethnicities — were exercising their power to protest. I have never in my life seen so many white people who care so deeply about America’s Original Sin, structural racial injustice and the 400 years of violence against black lives following the lead of their black brothers and sisters to voice that concern to the police and military and all the political leaders behind them. 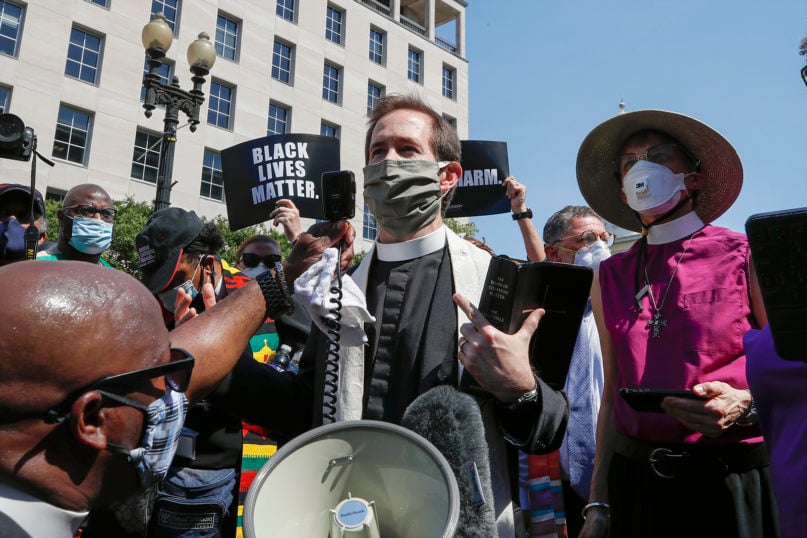 The Rev. Robert Fisher, rector of St. John’s Church, speaks, Wednesday, June 3, 2020, down the block from the church that is across Lafayette Park from the White House in Washington. The Rev. Mariann Budde, right, bishop of the Episcopal Diocese of Washington, also spoke. (AP Photo/Alex Brandon)

Last night on CNN, Atlanta Mayor Keisha Lance Bottoms was asked about “the difficult balance” of addressing injustice and protesters facing judgment for their anger.

“The only thing I know to do is to be true to who I am,” she answered. “By that I mean I have to articulate my pain, I have to articulate my frustration and anger; and I think that is what so many people across this country have wanted for so long. So when I hear Secretary Mattis speak out against Donald Trump, that’s what we have been looking for and asking for — people of good conscience to say, ‘I know you are hurting and I may not have understood it on yesterday, but I get it today; and I’m not going to be silent anymore.’”

RELATED: When will the monstrous become unacceptable?

Earlier in the day, four-star general and former Secretary of Defense James N. Mattis published his warning in The Atlantic. I encourage you to read the entire thing, but it says, in part:

The words “Equal Justice Under Law” are carved in the pediment of the United States Supreme Court. This is precisely what protesters are rightly demanding. It is a wholesome and unifying demand—one that all of us should be able to get behind. We must not be distracted by a small number of lawbreakers. The protests are defined by tens of thousands of people of conscience who are insisting that we live up to our values—our values as people and our values as a nation.

… We must reject any thinking of our cities as a “battlespace” that our uniformed military is called upon to “dominate.” At home, we should use our military only when requested to do so, on very rare occasions, by state governors. Militarizing our response, as we witnessed in Washington, D.C., sets up a conflict—a false conflict—between the military and civilian society. It erodes the moral ground that ensures a trusted bond between men and women in uniform and the society they are sworn to protect, and of which they themselves are a part. Keeping public order rests with civilian state and local leaders who best understand their communities and are answerable to them.

… Donald Trump is the first president in my lifetime who does not try to unite the American people—does not even pretend to try. Instead he tries to divide us. We are witnessing the consequences of three years of this deliberate effort. We are witnessing the consequences of three years without mature leadership. We can unite without him, drawing on the strengths inherent in our civil society. This will not be easy, as the past few days have shown, but we owe it to our fellow citizens; to past generations that bled to defend our promise; and to our children. We can come through this trying time stronger, and with a renewed sense of purpose and respect for one another. The pandemic has shown us that it is not only our troops who are willing to offer the ultimate sacrifice for the safety of the community. Americans in hospitals, grocery stores, post offices, and elsewhere have put their lives on the line in order to serve their fellow citizens and their country. We know that we are better than the abuse of executive authority that we witnessed in Lafayette Square. We must reject and hold accountable those in office who would make a mockery of our Constitution. At the same time, we must remember Lincoln’s “better angels,” and listen to them, as we work to unite.

When asked “What is your best cause for hope today?” Mayor Bottoms called for a “monumental shift” in order to “signal to our country that it is time to heal.” The Atlanta mayor added, “I am so inspired when I see protesters across this country and see police kneeling with protesters across the country because they are saying to each other, ‘I hear you, I feel you, and I want something better for our country, too.'”

It is time to name and pursue a new and deliberate timeframe. Prayer is essential. Protest is required. Politics must engage. Policy changes that are real and concrete must then follow until, as one young woman asked by a reporter how long she will protest replied, “Until I feel safe.”

This is a very dangerous moment. While governors and mayors are trying to deescalate the nation’s unrest, the president is escalating the violence to solidify his “Law and Order” bona fides come November.

Standing in front of the church, surrounded by federal forces, a Bible in one hand, Trump said America is the greatest country in the world. The president’s cynical and dangerous appeals to Christian nationalism are an affront to the mission of the church and the integrity of the gospel. His inflammatory words and reckless actions only pour gasoline on the flames of anger and racial injustice.

The president can violate our sacred spaces and Holy Bible, but he cannot take away our faith and our obedience to Christ. We, in our many faith traditions, will stand against such religious offenses, which are a threat to our democracy. Can I hear an Amen?

(The Rev. Jim Wallis is president of Sojourners. His new book “Christ in Crisis: Why We Need to Reclaim Jesus” is available now. Follow Jim on Twitter @JimWallis. The views expressed in this commentary do not necessarily reflect those of Religion News Service.)

This article has been updated. A previous version had the incorrect name of the Rector of St John’s. 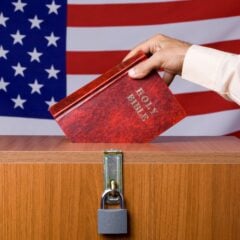