(RNS) — Every day when I wake up I’m reminded of the fractures in this world. A quick glance at social media will do it, or the distant memory of a past relationship. The greatest reminder for me, however, is that I wake up each morning with milky brown skin. This skin, crafted by my creator God and for which I am grateful, is also skin that leads to bigotry, prejudice and discrimination.

As a teenager I learned about the civil rights movement and the brave men and women who suffered pain and sometimes death for defending the rights of others. I marched in my city’s civil rights parade celebrating the birthday of Martin Luther King Jr. I have painful memories, such as the time a mom explained to me why her son couldn’t date a black girl. She wrapped her explanation in sentiments such as “You are kind” and “You are free to be his friend,” but our difference in skin color was too much for her. The thought of her son dating me was disgraceful; in her mind, it was “not right.”

Not right because to her, I was a different kind of person, a sub-creature.

In college, I had the opportunity to be the co-director of diversity affairs for our student government. I helped host a series of “coffee talks” open to anyone on campus willing to discuss race. Those discussions were helpful and eye opening, but they only scratched the surface.

In my political science class senior year, a young white man shared his disgust that black people might get into law school ahead of him because of quotas and affirmative action. I responded that not only had I gotten into law schools but I was an honor student and had done well enough on my LSAT to get in. To assume that every black person who got in did so because of affirmative action was appalling at best, racist at worst.

You might laugh to know that I have been racially profiled. At five-foot-two and 120 pounds, I’m not much of a threat. But that hasn’t stopped some people from assuming the worst based on the color of my skin. You could speak to most African Americans and find similar stories of racial bias, racism and discrimination.

But my father taught his daughters to love and forgive those who wronged us. He taught us that unity was possible and that all those who had gone before us in the civil rights movement had fought a good fight. The things my parents taught me growing up and the ways I longed for unity and oneness among others were all part of a common-grace, image-bearing impulse. These longings for love, forgiveness and justice reflected our creator.

But my pursuit of and desire for reconciliation didn’t become easier once I became a Christian. In many ways, it became harder.

Although I knew our churches were mostly segregated, I didn’t believe that divide was driven by racism. The next few years opened my eyes. Most Christians I met were content with the status quo — the race conversation had barely reached the church. I was met with a resistance I wasn’t expecting. Most of the time it looked like apathy. But we can’t love our neighbor if we don’t care about their suffering.

The years following were painful as I realized that the suffering of many black and brown people was not a priority for the church. It takes work for any of us to focus on someone other than ourselves.

Christians have to realize that we are ambassadors and that the implications of our faith and our role as ambassadors for Christ change everything. We learn that our allegiance isn’t to worldly structures and systems, but to the Lord. This reality frees us to labor for our neighbor, to engage in the culture for the good of society and to speak the truth in love.

But how we engage with one another on these topics is important. If the church is divided on race — and it is — what does that say to the world about us? How we seek to reconcile with one another could mean spiritual life or death to others looking in. It’s important, and we shouldn’t take this call lightly.

I’ve often heard that people are afraid to engage on topics like ethnic pride, racial bias, racial profiling and the sin of partiality because they do not want to offend. Perhaps they’ve previously made a mistake in their language that caused offense. Speaking the truth in love means speaking truthfully and listening charitably. Only then can we begin to identify and address the pitfalls of racism in systems, people and our own hearts.

If the ultimate goal is to speak the truth in love, I must evaluate my heart. Do I love the people I’m engaged with? Do I long to see them flourishing, or do I simply wish to be right? If they’ve said something hurtful, am I working toward forgiveness? 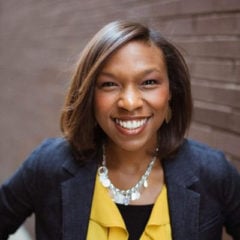 Engaging in the culture takes courage and risk, but also grace and forbearance. We want to speak the truth, but with the understanding that we don’t know what the person we’re speaking to has been through or experienced. I don’t want to come in with the assumption that everyone I engage with is more aware of these issues than they actually are. If we assume someone may simply not know, it allows for greater understanding and patience as we engage.

(Trillia Newbell is the director of community outreach for the Ethics & Religious Liberty Commission of the Southern Baptist Convention. This excerpt was adapted from “Uncommon Ground,” edited by Timothy Keller and John Inazu and used by permission of Thomas Nelson www.thomasnelson.com, Copyright 2020. The views expressed in this commentary do not necessarily reflect those of Religion News Service.)