(RNS) — Over the past two weeks, I have watched with amazement as George Floyd, a black man killed by a police officer, has not only become a cultural symbol of protest against systemic racism but a global phenomenon. And while rioting is not the right way to pursue justice, I’ve been heartened to see America’s democracy continue to work and move forward, however imperfectly.

It gives me hope that India, where I sit, can confront its past and present history of casteism.

Though slavery and untouchability have been abolished in both nations, neither of the world’s largest democracies has proved able to eradicate discrimination and ensure equal justice for all.

In India, the caste system has resulted in the discrimination and oppression of millions of men and women not just for centuries, but millennia. It is perhaps the oldest form of social stratification, and to this day it assigns people in India their worth, rights, privileges, occupation and place in society based on their birth. So-called low castes — Dalits, “untouchables” and tribals — have borne the economic, physical and spiritual brunt of this system.

Though its roots are in religion, it discriminates against people regardless of religious affiliation. And similar to the discrimination against black Americans, dark skin usually determines the amount of discrimination an Indian will experience.

As I watch blacks, whites, Asians, Latinos and people of faith and of no faith protesting on the streets of America, my heart aches for such an amalgamation of citizens peacefully protesting on our streets against the violence, scorn and social neglect Dalits, tribals and other low castes experience on a daily basis. I take pride in the CEOs of Microsoft and Google — both of Indian heritage — who have spoken out against racism and expressed their support for the black community. I hope business leaders in India will follow their lead and speak against caste discrimination. 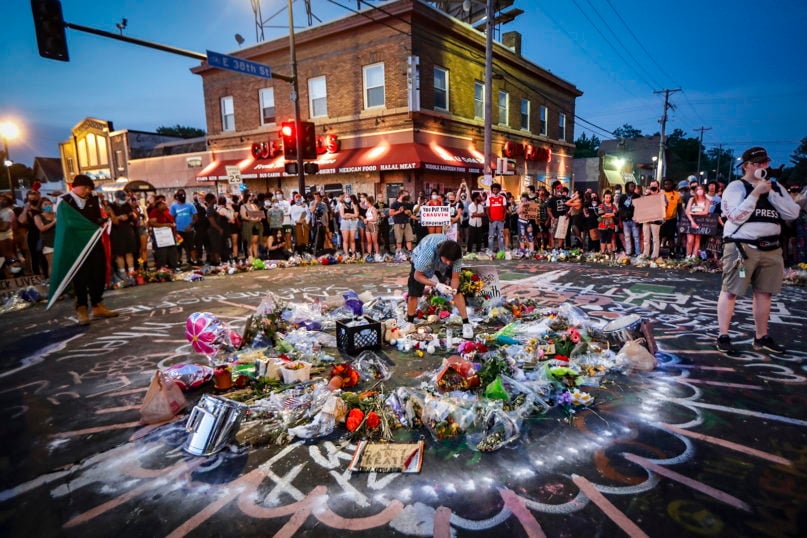 Protesters gather June 1, 2020, at a memorial for George Floyd where he died outside Cup Foods on East 38th Street and Chicago Avenue in Minneapolis. Protests have continued since his death after being restrained by Minneapolis police officers on May 25. (AP Photo/John Minchillo)

Caste privilege in India is as prevalent as white privilege in America, and it will take a similarly concerted effort from upper and low castes to put an end to this system.

I would be remiss if I didn’t recognize the incredible progress that has been accomplished over the past century for the rights of African Americans and low caste Indians. But the work won’t be done until African Americans can walk or run on the streets of their neighborhood without fearing they will be shot or killed because of the color of their skin, and low caste Indians can sit at the same table with upper castes without being treated as inferior because of their birth.

Jesus acknowledged in the Beatitudes that the human heart aches for the justice of God on earth. It is the primeval human cry, going back to Abel’s cry for justice after his brother Cain murdered him.

Yet we who are Christians have often only offered peace with God and the promise of heaven as the main elements of the gospel of Jesus Christ. The sobering truth is that more people have possibly turned away from Jesus because of our lack of involvement in human justice issues than because of a lack of preaching and evangelization.

God is against any form of human discrimination and exploitation, whether it be based on race, caste, gender, religion or ethnicity. If we do not grant that all humans are made in the image of God and are thus equal, then what kind of humans are we?

(The Most Rev. Joseph D’Souza is the founder of Dignity Freedom Network, which advocates for and delivers humanitarian aid to the marginalized in South Asia. He is archbishop of the Anglican Good Shepherd Church of India and serves as president of the All India Christian Council. The views expressed in this commentary do not necessarily represent those of Religion News Service.)

Religion Hub
Yoga versus democracy? What survey data says about spiritual Americans’ political behavior
Follow us on Facebook!
Submit your photos to RNS