(RNS) — An excruciating 8 minutes and 46 seconds have focused national attention on the past 400 years as much as anything has in either of our lifetimes. This week in Houston, George Floyd was put to rest in a very emotional funeral service that drew thousands in person, and seemingly much of the nation online. The video of a white cop’s knee on the black neck of Mr. Floyd as he pleaded, “I can’t breathe,” has become a modern-day version of Emmett Till’s open casket — which awakened and galvanized a generation of people around racial violence and oppression — as so many new white allies are now joining in the long-fought movement for racial equality and justice.

“America’s Original Sin” of racism and white supremacy has become part of the American narrative and consciousness like we have never seen before in a multi-racial and cross-generational conversation.

The Black Lives Matter movement has gone mainstream, with corporations like Amazon, civic leaders and police chiefs, and even NFL Commissioner Roger Goodell now emblazoning these words they once considered controversial on their websites and emails. But those words represent far more than a trendy slogan or hashtag; they are a resounding call for a deeper paradigm shift and transformation in American society to fully affirm the humanity and dignity of black people and ensure equal protection under the law for all.

Saying “Black Lives Matter” requires changing the culture of policing and transforming a whole system of racial injustice. Calls to “defund the police” have also been growing louder from the streets. Sadly this call is already being misunderstood, caricatured and distorted. For many, at its core it is a call to radically rethink and recreate policies, systems and practices that will lead to public safety for all Americans and ensure that equal justice under the law is inclusive of black people. Our nation has been addicted to an overly punitive and racially biased justice system, characterized by an over-reliance on police and an underinvestment in many communities. Many cities spend one-third to half of their budgets on policing. Now is a time to ask why and to examine ways to redirect funding to the kinds of community services and evidence-based approaches that will more effectively reduce both violence and crime, as well as improve community well-being. These demands do not equate to saying all officers are bad. There are good, honorable police officers who work long hours, build relationships in their communities and who truly want to protect and serve. This call, this plea, this demand for reimagination, is about transforming systems permeated by racism that often ask good officers to operate under a set of rules that are broken and unjust.

RELATED: Prayer is essential. Protest is required. Policy is necessary

Already the president and his allies are exploiting the call to defund to stoke fear and division in this election season. But what we can all unite around is the imperative to reimagine public safety and what will lead to safer communities for all Americans. In this moment it is important that we all hear the anguish, pain and outrage of so many who have taken to the streets and listen to the deeper message and substance behind their words. “Reform” and “reimagine” must not become binary choices, as both are necessary and the first must lead to the second. We can both push for short-term reforms and also demand broader and deeper transformation. The best of our faith calls for a both/and mindset and commitment.

Many are asking how long these protests can last, particularly in the midst of a pandemic. The best answer to this question came from SCLC leader Ella Baker some 50 years ago: “Until the killing of Black men, Black mothers’ sons, becomes as important to the rest of the country as the killing of a White mother’s son — we who believe in freedom cannot rest until this happens.” 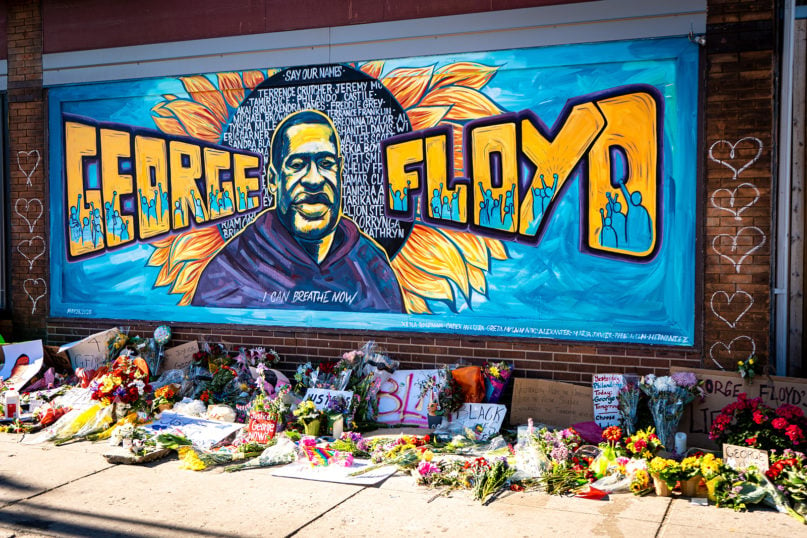 A mural and memorial honoring George Floyd and other black victims in Minneapolis, Minnesota. Photo by Munshots/Unsplash/Creative Commons

In his eulogy at George Floyd’s funeral, the Rev. Al Sharpton said, “We are not fighting some disconnected incidents. We are fighting an institutional, systemic problem that has been allowed to permeate since we were brought to these shores. And we are fighting wickedness in high places.”

One thing is absolutely clear: The leaders and members of faith communities across the country must be deeply engaged in policing reforms in the immediate and longterm. White Christians and white churches must stand in repentance as they join their black brothers and sisters in Christ in these discussions with local mayors, police chiefs, governors and the Congress.

Churches must listen, learn and strategize about how the faith community can offer its most prophetic and practical leadership, standing in solidarity with black-led movements driven by a younger generation. Transforming our policing and reimagining public safety will require much more dialogue, bridge-building and, ultimately, sustained public pressure.

While there is no magic bullet or panacea to redressing what are deep-seated and complex issues, there are many commonsense and evidence-based solutions that are coming back into the fore, including: an immediate ban on chokeholds and strangleholds, prohibiting no-knock warrants, requiring de-escalation, requiring a use-of-force continuum and more. Many of these reforms are contained in the Justice in Policing Act, which the Congressional Black Caucus introduced on Monday. The proposed legislation also deals with needed reforms like changing qualified immunity for police officers, creating a national database to track police misconduct, granting subpoena power to the U.S. Department of Justice to conduct pattern and practice investigations into discriminatory and unconstitutional policing practices, and breaking the grip of usually white-controlled police union contracts.

But reimagining requires more than basic commonsense reforms: We must also reinvest in education, housing, treatment for substance abuse and mental health issues and much more. Some of those reinvestments will require diverting funds from parts of policing budgets that have been used ineffectively and sometimes harmfully to promote the very bias, brutality and deadly racism that George Floyd’s death has once again exposed.

As Christy E. Lopez laid out this week in The Washington Post:

We ask police to take accident reports, respond to people who have overdosed and arrest, rather than cite, people who might have intentionally or not passed a counterfeit $20 bill. We call police to roust homeless people from corners and doorsteps, resolve verbal squabbles between family members and strangers alike, and arrest children for behavior that once would have been handled as a school disciplinary issue … It is clear that we must reimagine the role they play in public safety … shrinking the scope of police responsibilities and shifting most of what government does to keep us safe to entities that are better equipped to meet that need.

All these policy changes must happen alongside deeper conversations about America’s original sin, manifest in the systemic and structural racial injustice in our society, that must be eradicated, cleansed and healed.

We have been reflecting both on George Floyd’s horrific murder — which followed the senseless killings of Ahmaud Arbery, Breonna Taylor and so many others — and on how the overwhelming response from the streets has galvanized an overdue tipping point in public opinion around police violence and racism.

In religious terms, we hope and we pray that this moment could even be a Kairos moment, one in which the sheer brokenness and depravity of the status quo generates an awakening and reckoning that makes radical transformation possible. Our beloved friend Vincent Harding often reminded us that you can’t start a movement, you can only prepare for one. In a similar way, you can’t fully predict a Kairos moment, but you can be ready when it arrives, and you can help accelerate it with courageous action. We can’t allow this to be simply a moment. By using our voices, our votes, and our resources to advance both bold reforms and a reimagining of public safety, we can help strengthen and sustain a movement that has the power and potential to transform our nation.

(The Rev. Jim Wallis is president of Sojourners. His new book “Christ in Crisis: Why We Need to Reclaim Jesus” is available now. Follow Jim on Twitter @JimWallis. Rev. Adam R. Taylor is executive director of Sojourners. He previously led the Faith Initiative at the World Bank Group. Follow him on Twitter @revadamtaylor. The views expressed in this commentary do not necessarily reflect those of Religion News Service.)