(RNS) — President Donald Trump has renewed outreach efforts to conservative Christians this week, targeting his most dedicated supporters in the wake of lagging poll numbers.

“We know that American patriots don’t bow down to foreign powers,” Trump told the crowd gathered for a Students for Trump rally at Dream City Church in Phoenix, Arizona, on Tuesday (June 23). “We don’t back down from left-wing bullies. And the only authority we worship is our God.”

The rally, which included a number of young evangelicals, was one of several efforts by Trump to appeal to conservative religious voters this week. But experts say the real question is whether his outreach will win over moderate evangelicals who may be second-guessing their support for Trump in light of his administration’s pandemic response, the ongoing economic fallout and recent unrest after the death of George Floyd.

In addition to the rally, Trump also conducted interviews with both the Christian Broadcasting Network and EWTN — networks that cater to conservative evangelicals and Catholics, respectively.

When Brody asked Trump if he had been elected president “for such a time as this” — a reference to Esther 4:14 in the Bible — Trump responded that he didn’t want to think about it before quipping, “I hope it’s true.”

Meanwhile, Vice President Mike Pence has embarked on a “Faith in America” tour across the country. The former Indiana governor is slated to visit the Texas church of Trump evangelical advisor and pastor Robert Jeffress during the cross-country jaunt, and Pence’s appearances are sprinkled with language that lashes together religious references with patriotic rhetoric.

“And when you pray, be confident,” Pence told a crowd in Pewaukee, Wisconsin, this week. “Be confident, as we face challenges in health and challenges in our public discourse, that if his people who are called by his name will humble themselves and pray, he’ll do like he’s always done through the long and storied history of this country: He’ll hear from heaven and he’ll heal this land, this one nation, under God, indivisible, with liberty and justice for all.“

The religious blitz comes on the heels of polls showing unusually low favorability for Trump among religious groups who have long supported his presidency.

According to a recent survey from PRRI, Trump’s favorability among white evangelicals fell from 77% to 62% from March to the end of May. The shift was even more dramatic among white Catholics: According to the survey, the president’s approval rating has plummeted 23 percentage points with the group since March — from 60% to just 37%.

Marie Griffith, who oversees the John C. Danforth Center on Religion and Politics at Washington University in St. Louis, said the sharp decline appears to have spooked the Trump camp.

“The slippage in Trump’s poll numbers among white evangelicals and Catholics has probably chilled the blood of the Trump campaign,” Griffith said in an email to Religion News Service. “If those numbers keep sliding and don’t rebound, Trump’s path to victory looks a lot harder than many would have thought a year ago.”

But John Fea, history professor at Messiah College and an expert on American evangelicalism, expressed skepticism as to whether the president is targeting the voters he needs to win in November.

“The people who watch David Brody and the 700 Club, EWTN, or any megachurch that would open its doors to Trump are NOT the white evangelicals he needs to win,” Fea said in an email. “He’s preaching to the choir.”

Fea argued that Trump should instead be concerned about “moderate evangelicals” who backed him in 2016 but are now “thinking about going elsewhere in 2020.”

They’re also harder to reach, he pointed out.

“They do not have television shows and, if they have megachurches, they would not invite Trump to come.”

It’s unclear if Trump’s sudden dip — which analysts have attributed to his response to the coronavirus, his handling of the George Floyd demonstrations, or both — is a harbinger of things to come. According to recent polling data provided to RNS by Marquette University Law School, evangelical support for Trump hit a record low in Wisconsin in May but has since rebounded. 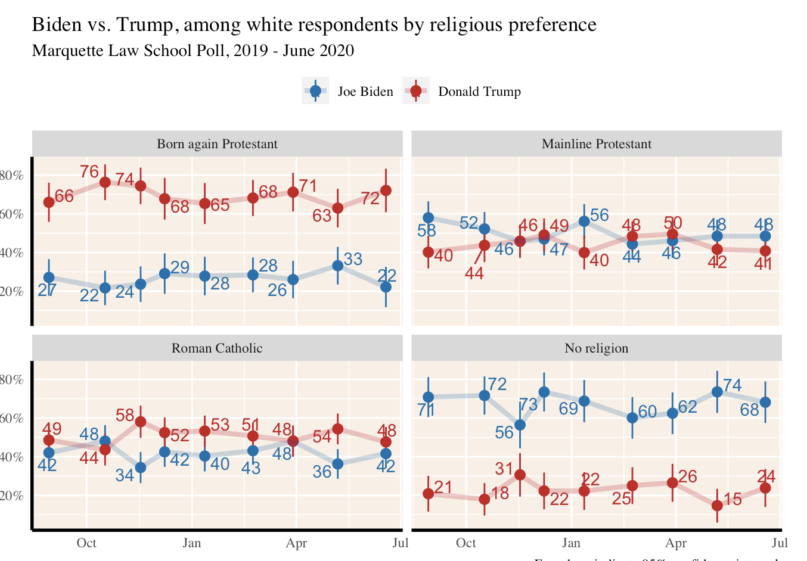 However, Griffith argued that even a minor exodus of conservative Christian support could cost Trump dearly come Election Day.

“Nothing is going well for Trump right now, including his poll numbers among white evangelicals and Catholics,” Griffith said. “The campaign has to feel that they cannot afford to lose more than they already have, and his sudden re-engagement with conservative Christians this week is a vigorous effort to remind those voters why they love him.”