(RNS) — It has been 25 years since Bosnian Serbs in Srebrenica, a small town in eastern Bosnia, murdered nearly 8,000 men and boys. The most extensive genocide in Europe since the Holocaust, the massacre capped a three-year campaign of ethnic cleansing, which included regularized instances of summary executions and torture as well as rape camps and forced labor.

Over that span, the Serbian paramilitary forces, supported by Slobodan ethno-national Serbian state next door, tortured tens of thousands and displaced two million more and left at least 200,000 dead.

The Srebrenica massacre — carried out while ignoring a United Nations “safe zone” created by United Nations peacekeepers stationed in the area to protect Bosnia — has been mourned as a failure by the international community to prevent genocidal attacks.

But in the 25 years since, the world has failed to prevent atrocities against civilians in Baathist Iraq, Cambodia, Burundi, Rwanda, Somalia, Sudan, and too many other places to list. Seventy-five years after the Holocaust, the world’s nations have effectively turned their backs on the collective post-war promise “Never again.” 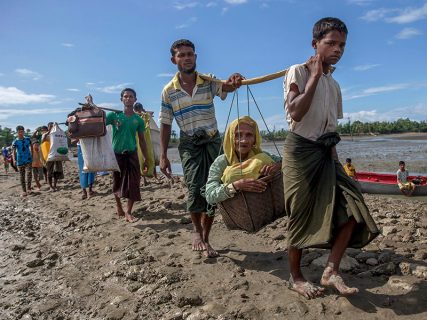 Rohingya Muslims, who crossed over from Myanmar into Bangladesh, carry an elderly woman in a basket and walk toward a refugee camp in Shah Porir Dwip, Bangladesh, on Sept. 14, 2017. (AP Photo/Dar Yasin)

In Myanmar, more than 10,000 Rohingya civilians have been murdered by the Buddhist majority military forces. More than 740,000 have been driven out of their homes and into neighboring Bangladesh. Thousands have been tortured, including by rape. In Syria, the death toll rises, and the massive human displacement continues, while 80% of war-torn Yemen’s population cannot survive without humanitarian assistance.

If we are to make good on our promise to stop mass atrocities from happening, we must restore principled American leadership in multilateral institutions.

At the ceremony marking the Srebrenica massacre’s 10th anniversary, U.N. Secretary-General Kofi Annan made a startling admission that the body’s philosophy of impartiality and non-violence, “however admirable, was unsuited to the conflict in Bosnia.” Indeed, the international community’s “neutrality” doctrine has been shamefully used for generations to halt interventions into humanitarian crises.

The persistent shortcomings of multilateral institutions call us to reform them, not rebuff them, however. Indeed, it is more crucial than ever that Washington provides strong leadership in our broken world by engaging through the U.N., NATO, and other multilateral organizations. Accountability before the international community — an important outcome of both the Nazi genocide and what happened in Srebrenica — can serve as a deterrent against atrocities and a means to bring perpetrators to justice.

The Nuremberg trials, with strong American leadership, set the precedent for international tribunals to hear claims regarding war crimes and crimes against humanity. After Srebrenica and the Bosnian War, the International Criminal Tribunal for Former Yugoslavia charged and convicted the chief perpetrators, among them the then-president of the Bosnian Serb Republic, Radovan Karadzic, and the commander of the Bosnian Serb Army, Ratko Mladic. Milosevic’s trial ended in 2006 when he died in prison. 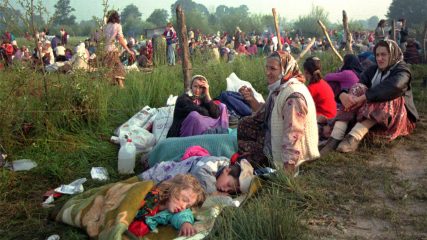 Muslim refugees from Srebrenica, who had spent the night in the open air, gather outside the U.N. base at Tuzla airport, on July 14, 1995, in Bosnia. More than 10,000 refugees, fearing Bosnian Serbs, sought the U.N for help. (AP Photo/Darko Bandic)

America offers a voice of moral leadership on the global stage, but we must also ensure that our practice at home models the values we wish to project. As America grapples with the painful legacy of racism and the challenges of socio-economic and political division, we must hold steadfast to our shared ideals of equality and liberty. And we must continue to foster and embrace an American ethic that regards patriotism and diversity as values in concert, not in conflict.

As we remember the millions of innocents murdered during the Holocaust and the massacre of thousands in Srebrenica, let us honor their memories by striving to work together as free people to foster peace and healing in the many places of war, conflict and human suffering.

Earlier this year, as part of a delegation of faith leaders from Europe, the Middle East, Asia, and the United States, organized by the American Jewish Committee in partnership with the Muslim World League, we visited Auschwitz-Birkenau, the most infamous of the German Nazi death camps, during the 75th anniversary of its liberation.

An American Muslim committed to Holocaust education and the Jewish grandchild of survivors, together we bore witness to the mass murder perpetrated in the camps and reaffirmed, as people of faith, our commitment to work together to fight the scourge of racism and hate that continues to plague our world.

This work is urgently needed as today’s headlines reveal humanity’s failure to learn the painful lessons of history.

(Ari Gordon is American Jewish Committee’s director of U.S. Muslim-Jewish Relations. Suhail Khan is a senior fellow at the Institute for Global Engagement. Both serve on the Muslim Jewish Advisory Council. The views expressed in this commentary do not necessarily reflect those of Religion News Service.) 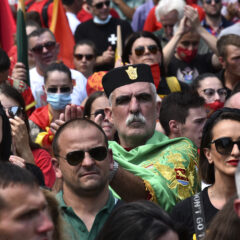 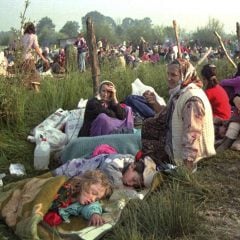 News
Germany celebrates a historic milestone of Jewish culture — while looking forward
Follow us on Facebook!
Submit your photos to RNS