WASHINGTON (RNS) — Faith leaders are speaking out against the federal government’s decision to begin executing federal prisoners, decrying the Trump administration’s decision to end a nearly two-decade-long moratorium on the federal death penalty.

The outcry comes as the U.S. Department of Justice carried out its second execution this week on Thursday morning (July 16), killing 68-year-old Wesley Purkey by lethal injection after he was convicted in 2003 of raping and murdering a 16-year-old girl as well as killing an 80-year-old woman.

Purkey’s death followed the Tuesday execution of Daniel Lewis Lee, who was convicted for his involvement in the killing of a family of three. A third execution is scheduled for Friday. These constitute the first uses of capital punishment by the federal government since 2003.

Faith leaders say the federal government’s use of the death penalty, which resumed after a 2019 push by the Justice Department, is out of step with their faith.

“So much for the ‘pro-life’ administration,” the Rev. James Martin, a Jesuit priest and author, wrote in a Facebook post. “The taking (of) a life is always immoral. So is the taking (of) a life to punish the taking of another life. This is why the Catechism of the Catholic Church says that the death penalty is ‘inadmissible.’ It is an assault on the dignity of the human person and on human life.” “As faith leaders from a diverse range of traditions, we call on President Trump and Attorney General Barr to stop the scheduled federal executions,” the statement reads. “As our country grapples with the COVID 19 pandemic, an economic crisis, and systemic racism in the criminal legal system, we should be focused on protecting and preserving life, not carrying out executions.”

“Abolish the death penalty,” tweeted Sikh author, scholar and Religion News Service columnist Simran Jeet Singh. He was one of many after Lee’s execution who tweeted the phrase — including U.S. Rep. Ayanna Pressley and Sen. Elizabeth Warren, both of Massachusetts.

Cardinal Joseph Tobin, head of the Catholic Archdiocese of Newark, also publicly opposed the execution of Dustin Honken, who was convicted of killing five people and is scheduled to be executed on Friday. Tobin, who has personally ministered to Honken, said he understood the hurt Honken’s actions caused others but insisted that “killing Mr. Honken will do nothing to restore justice or heal those still burdened by these crimes.”

What’s more, Tobin argued that Honken’s execution would “reduce the government of the United States to the level of a murderer and serve to perpetuate a climate of violence which brutalizes our society in so many ways.”

The executions come at a time when opposition to capital punishment has climbed to some of the highest levels in decades.

A 2018 survey from the Public Religion Research Institute found that 55% of Americans preferred life in prison without parole over the death penalty for people convicted of murder, compared with 44% who preferred capital punishment. Most major religious groups — such as Black Protestants (80%), white Catholics (54%) and non-Christian religious groups (57%) — also favored life in prison, with two notable exceptions: White evangelicals (62%) and white mainline Protestants (54%) both preferred the death penalty.

Multiple faith groups have issued statements opposing the death penalty in the past, such as the United Methodist Church; Evangelical Lutheran Church in America; Episcopal Church; Presbyterian Church (U.S.A.); United Church of Christ; Unitarian Universalist Association; and Union for Reform Judaism, among others.

“The premeditated and unnecessary killing of a person is unchristian and beyond the legitimate powers of the state,” read a 2019 statement from the Episcopal Church released shortly after the Trump administration revealed its intention to resume federal executions.

“The government isn’t being ‘tough on crime’ when it executes our fellow citizens,” Sister Helen Prejean, a Catholic nun and longtime opponent of the death penalty, tweeted on Wednesday. “The death penalty is a sign of weakness, not strength. It shows that our society has failed to solve social problems. Capital punishment makes the U.S. a human rights pariah in the global community.”

Trump’s support for the practice is in stark contrast with his Democratic opponent, former Vice President Joe Biden, a Catholic who is backing legislation to end the use of the death penalty at the federal level.

Trump was asked about the issue in June by the conservative Catholic television station EWTN. Show host Raymond Arroyo noted that some Catholics and evangelicals interpret Biden’s opposition to the death penalty — combined with his insistence the government act to curb climate change — as evidence the former Delaware senator is more “pro-life” than Trump.

“I am totally in favor of the death penalty for heinous crimes,” Trump replied. “That’s the way it is.” 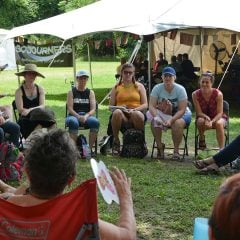