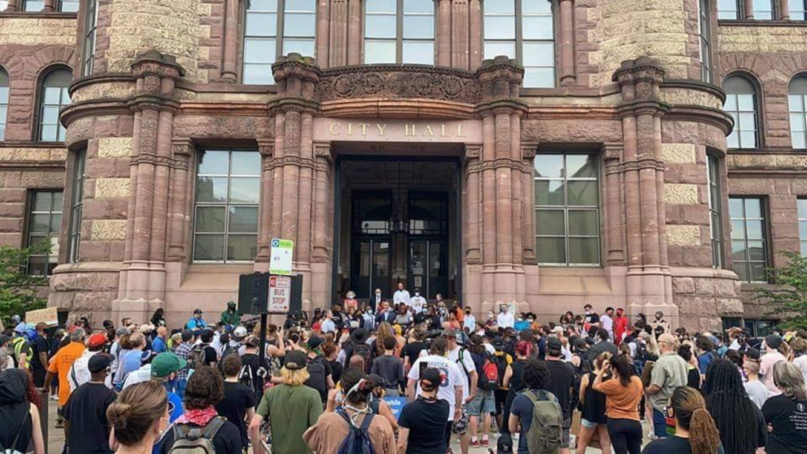 The scene outside Cincinnati’s City Hall on July 7, when gatherers called on the city to drop the charges against Black Lives Matter protesters in late May and early June.

In late May and early June, more than 500 protesters were arrested and charged in Cincinnati with “misconduct at an emergency,” a first-degree misdemeanor that can carry up to a $1,000 fine and 180 days in jail. Some local pastors and residents are crying foul.

Using the hashtag #CincyDroptheCharges, they have created a petition that spells out their frustration that what the city did during the Black Lives Matter protests downtown was excessive and wrong. In early July, they filed a motion for the city to drop the charges “with prejudice,” which means that it’s a permanent dismissal; those who were arrested don’t have to waive their future right to sue the city for civil rights violations.

The Rev. Alice Connor, a campus minister at the University of Cincinnati who is helping to coordinate the efforts, was downtown during the day on Sunday, May 31. Although the arrests did not begin until the evening, she told RNS the tension was already building to a high pitch even during the afternoon, when police “were lining the street in full riot gear.” The crowd began to chant, “Why are you in riot gear? We don’t see a riot here.” The crowd, she said, was yelling, but there was no violence or looting. The atmosphere was tense, and the police presence seemed to make that worse.

“We were constantly hearing helicopters overhead, and the police were kind of herding us along our route and hemming us in at the back with their sirens on full blast, and the flashing lights,” Connor reported. “It was fascinating to me to watch this obvious display of intimidation. I’ve been to other protests and rallies where the police were there to block traffic, and it was very chill. This was not chill. They were there to bring the intimidation factor.”

Rev. Connor and her students left to do an evening worship service in a nearby park, and as the evening wore on the situation escalated.

After the 9 p.m. curfew that had been temporarily imposed by Mayor John Cranley came and went and the crowd had not dispersed, the police began to arrest many of the protesters. 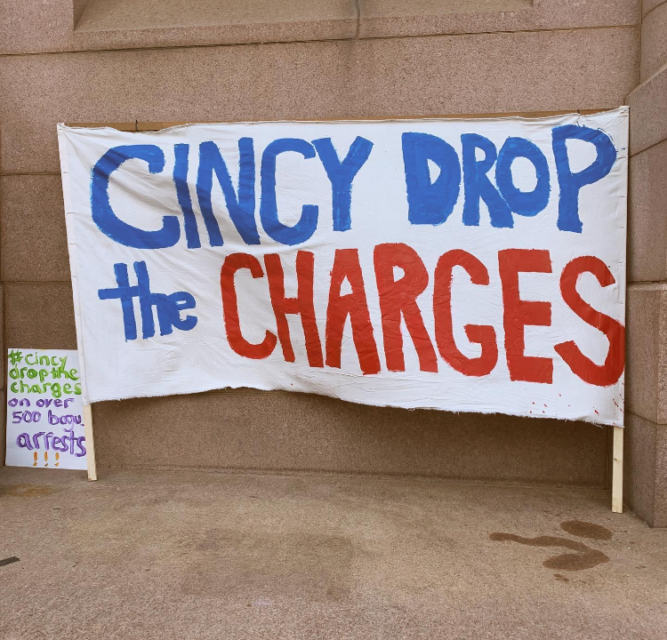 Jacqueline Greene, a partner with the law firm of Friedman & Gilbert who is working with the Cincinnati Mass Defense Coalition to coordinate volunteer attorneys to help defend the arrested protesters against criminal charges, said that the people “should never have been charged” in the first place, let alone with the first-degree misdemeanor offense of misconduct at an emergency.

“We believe these charges were ultimately directed at suppressing the voices of people who were expressing support for the movement for black liberation,” she said in an interview.

She pointed out several problematic issues with the way the situation unfolded. The curfew itself, she argued, was “not lawfully issued,” as the decision was made without counsel and did not provide an opportunity for public discourse. Then, the fact that the city charged the protesters with misconduct at an emergency instead of garden-variety curfew violations, which would have incurred lesser charges, was excessive.

And finally, there was the manner in which the arrests occurred. The people could have been “cited and released,” but the police opted instead to take them into custody — even though they lacked adequate facilities for doing so.

“These people were loaded onto buses, held on the buses for hours without being allowed to go to the bathroom,” Greene said. “Some people urinated on themselves. Then they were held outdoors in a courtyard overnight without access to bathrooms.”

There was also no drinking water and no food. Many were cold, as they had been dressed for a hot summer day, but the nighttime temperatures dipped down into the 40s.

It was also during the pandemic. “When they arrested people, it was in the midst of COVID, and they took people’s masks away and held them in close quarters. So there’s a whole issue of COVID-19 risk,” Greene said.

“All of these choices, in concert, were intentionally designed to pull people off the streets by the hundreds. They subjected them to inhumane conditions. The city didn’t have to do any of that, and they chose to do all of those things.”

The motion was filed on July 6 and served to the city on July 7, so now it’s a time of waiting to see what the city will do.

Rev. Connor said that, to her, this is an issue of biblical justice as well as First and Third Amendment rights.

“People are literally dying in this country because of police brutality and white supremacy, and thousands of people are taking to the streets to say this is wrong,” she said. “They should not be arrested for it.”

News
Inside the church at the heart of the Louisville’s Breonna Taylor protests
News
With Junipero Serra banished, California’s Indigenous activists and artists ask what goes in his place
Opinion
As political violence rises, we need peacemakers at the polls
News
Black skeptics find meaning in uplifting their community through social justice
Opinion
The difference between heroes and martyrs
© Copyright 2020, Religion News Service. All rights reserved. Use of and/or registration on any portion of this site constitutes acceptance of our User Agreement and Privacy Policy, Privacy Statement and Cookie Notice. The material on this site may not be reproduced, distributed, transmitted, cached or otherwise used, except with the prior written permission of Religion News Service.