(RNS) — I spoke this week at the 2020 Democratic National Convention’s Interfaith Council meeting. As refreshing as it was to hear voices encouraging change from the last four years, it felt like some things were still being missed.

Although Muslims were present at the DNC, it definitely seemed like we were being kept on the sidelines.

Anti-Muslim sentiment is unsurprisingly commonplace among Republican politicians in the United States. Donald Trump’s 2016 campaign promises of a “total and complete shutdown” of the country’s borders to Muslims were not a starting point, but just one of many Islamophobic public statements made by a Republican candidate for president that year.

These days, it would be hard to find a Republican politician who hasn’t said something xenophobic about Muslims, and although the acknowledgment is not where it could be, there is still some acknowledgment of Republican Islamophobia nonetheless.

Yet, for some reason, the role Democrats play in deepening Islamophobia is hardly ever acknowledged or discussed.

This week, Joe Biden tweeted a note of thanks to Ady Barkan, an Israeli American lawyer and progressive activist who spoke on the main stage of the DNC’s second night of programs: “Thank you, @AdyBarkan for your courage and for all that you do to ensure a more just, more equal America. #DemConvention.”

The day after, Barkan demonstrated this ethic in a tweet that supported Linda Sarsour in response to the Biden campaign’s disavowal of her.

Sarsour is a Palestinian Muslim woman well-known for her social justice work on behalf of marginalized communities of all backgrounds. She spoke at the DNC as well and, to no one’s surprise, her presence was immediately controversial. 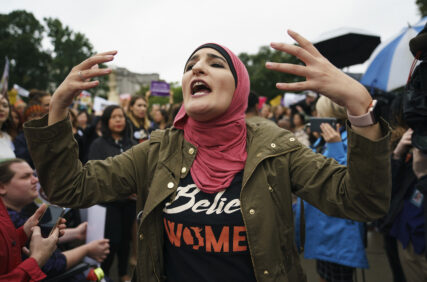 Linda Sarsour, with the Women’s March, calls out to other activists opposed to President Donald Trump’s embattled Supreme Court nominee, Brett Kavanaugh, in front of the Supreme Court on Capitol Hill in Washington, on Sept. 24, 2018. (AP Photo/Carolyn Kaster)

She speaks out against anti-Blackness, mistreatment of women and so much more.

She also has mobilized thousands of people to support the Biden campaign. She is encouraging people of all backgrounds to vote for Biden. She is the perfect target for those on the right using Islamophobia to further their agenda to dismantle a disorganized Democratic Party.

Rather than use the opportunity to speak out against anti-Muslim and anti-Palestinian sentiment, the Biden campaign responded by bolstering right-wing Islamophobia against a Muslim woman who advocates for Palestinians, citing her criticism of Israel’s government to be equated to anti-Semitism.

This opens the door not just for alienation of Muslim and Arab voters, but also for Islamophobia to be a part of another U.S. election cycle and violence against Muslims and those perceived to be Muslims to increase at alarming rates.

Met with many responses of dismay, the Biden campaign tweeted out support for the diversity of the Democratic Party, including Muslims and Arab Americans. But the campaign really should be issuing an apology statement.

All of this took me back to 2008 when then-presidential candidate Barack Obama’s staffers kept Muslim women in headscarves from sitting in seats that would have them appear in photographs with him.

Essentially, Muslims have long been seen as a perceived liability by a Democratic Party that claims to be progressive but in reality has silently acquiesced to and also perpetuated Islamophobia in the United States for far too long.

In 2016, it was only after Trump had pushed the envelope so far with his xenophobic comments on Muslims that the DNC included many Muslim voices on its main stage. This was not because it was the right thing to do, but because for the first time Muslims transitioned from being a liability to being an asset.

Yet in 2020, we have returned to being a perceived liability again.

Although some Muslims, myself included, spoke on different caucus and council panels, this year’s DNC had not one Muslim voice present on its main stage despite four years of consistent Islamophobia coming out of Trump’s office.

Sadly, after four years, Republicans have stayed the same and Democrats have also.

Mere tokenization of Muslims can no longer be acceptable in the U.S.

Throughout the country, we have demonstrated that Muslims are a key voting bloc on a local level and growing clout on a state level. In this upcoming presidential election, Muslims make up a key constituency in various swing states that Democrats will need in order to win.

Alienating us because there was no time and effort put into building other strategies in response to what all of us know is going to come does nothing more than hurt Democrats. But there is still time to figure things out. It’s inevitable that minorities of all backgrounds will continue to be targeted as we approach November, including Muslims.

It is a Trump strategy to build walls between himself and those he disagrees with. He will be beaten by learning from his unfortunate example, not following it. The time is critical to build coalitions and work with the diversity of communities and their leadership in the U.S., not against them.

The Biden campaign needs to engage substantively with Muslim leaders in the U.S. and build a campaign that actually represents the big tent it claims to host. A “good Muslim, bad Muslim” framework won’t work. Together we can do better, but only if together is actually together.

(Imam Khalid Latif is executive director of the Islamic Center at New York University. The views expressed in this commentary do not necessarily reflect those of Religion News Service.)