Most recently, the church met indoors again on Sunday (Aug. 30).

The county, in a statement, said most organizations, including churches, “are doing the right thing to prevent COVID-19.”

“A few organizations are not following state and local health orders, however, and the County will continue to take action to protect the health of residents and the community,” the statement read.

Pastor Jack Trieber during Sunday morning service said he would not shake church members’ hands unless it was their choice to do so.

“If I get COVID, God bless you,” Trieber said. “It’s going to be a great funeral.” 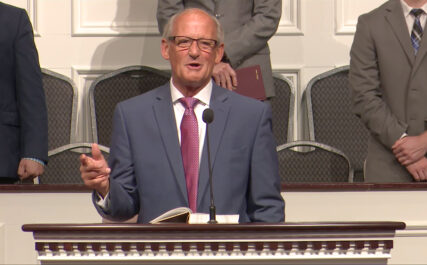 During the Sunday afternoon service, Trieber thanked congregants for attending, and at one point, church members sang “America the Beautiful.”

“I love America,” Trieber said. “The backbone of the country is the church and the home.”

Trieber has said the church followed orders early during the pandemic, closing its church, Christian school and ministries. He has also spoken about how the number of COVID-19 deaths has been fewer than expected.

“We gladly shut down at the beginning for 14 weeks,” Trieber said on Sunday.

A reporter and photographer from The Mercury News were not allowed to enter the church on Sunday, the newspaper reported.

Many congregants who attended Sunday morning declined to speak to a reporter or give their names, according to The Mercury News. One man told the newspaper the service was “tremendous,” but would not give further details, saying, “I’m not authorized to talk.”