(RNS) — In the biblical account, the walls of Jericho came tumbling down after Joshua commanded seven priests to blow their ram’s horns or shofars.

This year, it will take a lot more than seven priests for the plaintive wail of the shofar to penetrate the walls of Jews sheltering in place for the Jewish High Holy Days.

The coronavirus has left nearly all synagogues across the country shuttered. On Rosh Hashana, the Jewish New Year, which begins at sundown Sept. 18, and Yom Kippur, the Day of Atonement, which starts the evening of Sept. 27, most Jews will be streaming services from home.

But Jewish law requires Jews to hear the shofar in person, and now many Jews are scrambling to figure out ways to provide that hornlike blast to as many people as possible, since rabbis say an online recording should be the last resort.

While some Jewish homes have a shofar — mainly as a decorative ritual object — few American Jews actually use it. In most Jewish congregations, a handful of people trained in blowing a shofar are called upon year after year to do the honors in front of packed sanctuaries. 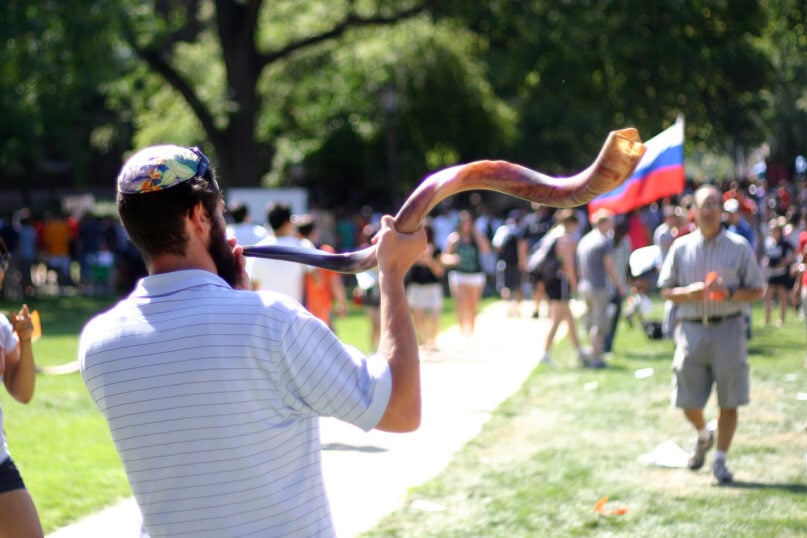 A man plays the shofar at the University of Illinois at Urbana–Champaign on Aug. 22, 2010, in Champaign, Illinois. Photo by Clay Gregory/Creative Commons

But ahead of the High Holidays this year, many people are dusting off their shofars and getting on Zoom with trained shofar blowers to learn how to use it for small groups gathered outdoors.

Chabad, the Hasidic Jewish dynasty based in Brooklyn, last week began offering a three-session how-to class called “The Sound and the Spirit.” As of earlier this week, 4,000 people had registered for it.

Rabbi Chanoch Kaplan, who serves at Chabad House in Franklin Lakes, New Jersey, teaches the prerecorded class and expects many more to register in the coming days. (The course is free but has a $40 suggested donation.)

Kaplan has been blowing shofars and teaching children in Hebrew school how to make them for more than 20 years. With a little instruction, he said, anyone can do it. But “obviously, practice makes perfect.”

Kaplan said he learned from his father, who used to stand at the Jewish-American Festival in Baltimore’s Inner Harbor year after year to teach passersby how to blow the shofar.

“I looked up to him and I was mesmerized by the sound as it would penetrate the air and people stood and listened,” Kaplan said.

The shofar is harvested from the carcass of a ram or almost any other kosher animal; antelopes have particularly beautiful spiraling horns. They’re widely available online for as little as $30, though they can fetch much more.

A shofar has to be completely empty of bone and cartilage to be used. This can be done manually with boiling water or oil or a blowtorch. Afterward, it can be cleaned and sanitized, sometimes sanded and polished. Any puncture, even if it is repaired, renders the shofar ritually unfit.

Hearing the shofar on Rosh Hashana is a mitzvah — a required, virtuous deed. It is intended to awaken the soul and prompt people to reflect on the past year and vow to return to God. The clarion call is so important to hear in person that many synagogues switch off any microphones or audio amplifiers before the shofar is blown.

This year, because the first full day of Rosh Hashana falls on a Saturday, the shofar will not be blown until Sunday, the second day of the holiday.

There are three sound combinations blown on Rosh Hashana and they can be learned.

“The most important thing I tell people is, it’s not about the amount of air you’re blowing,” Kaplan said. “It’s about your position. If you get the position right, it’s no problem whatsoever.” 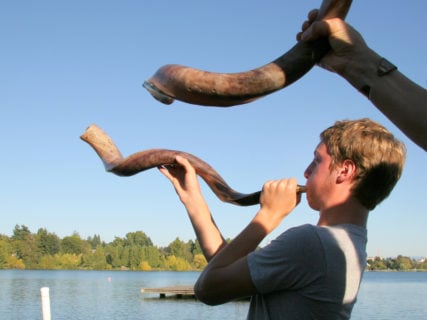 In Raleigh, North Carolina, Beth Meyer Synagogue has assembled a shofar corps — a group of people who will go around to outdoor courtyards around nursing homes or assisted living complexes so elderly Jewish residents can hear the sound without leaving their rooms.

“We have to be sensitive to the neighbors,” said Rabbi Eric Solomon. “But we’re excited about it.”

As an extra precaution, the Orthodox Union has issued guidelines recommending a surgical mask be wrapped over the wider end of the shofar. The fear is that some droplets from the blower could turn into aerosols, thus posing a COVID-19 infection risk.

Adam Levine, a professor of math at Duke University who is active at Beth El Synagogue in Durham, North Carolina, said he owns two shofars, which he received as bar mitzvah gifts years ago.

“I can’t really get much of a sound out of either one of them,” Levine said. “I’m hoping to get a little Zoom lesson in between now and then. I certainly am not going to put anyone’s shofar hearing in my hands. But if I can maybe try to learn to do it for myself it’ll be nice to take this opportunity.”