VATICAN CITY (RNS) — Responding to reports that the Vatican sent a delegation to Beijing to renew negotiations on the appointment of Catholic bishops, U.S. Secretary of State Mike Pompeo issued a stern reminder during an impromptu visit here on Wednesday (Sept. 30) that faith leaders need to “exercise a moral witness against the persecution of believers.”

His comments, first published in an article and then repeated at the U.S. Embassy event, were met with pushback from church officials.

“Nowhere is religious freedom under assault as much as it is in China today,” Pompeo said at the symposium on “Advancing and Defending International Religious Freedom through Diplomacy,” organized by the U.S. Embassy to the Holy See in Rome.

“As with all communist regimes, the Chinese Communist Party deems itself the ultimate moral authority. The increasingly repressive CCP, frightened by its own lack of democratic legitimacy, works day and night to snuff out the lamp of freedom, especially religious freedom, on a horrifying scale,” he said.

Pompeo quoted the pontiff’s call, in his 2013 exhortation “Evangelii gaudium,” for the church to be “permanently in a state of mission.”

Pompeo is visiting Rome and the Vatican through Thursday and will meet with Italian and church officials, including the Vatican’s secretary of state, Cardinal Pietro Parolin, and the secretary for relations with states, Archbishop Paul Gallagher, who is Pompeo’s counterpart in the Vatican system.

As is customary when the United States is approaching national elections, Pope Francis will not hold a private audience with Pompeo.

Under Francis, the Vatican has sought dialogue with China, in part to ensure the well-being and safety of the almost 6 million Catholics in the country.

In September 2018, Vatican and Chinese authorities signed a provisional agreement aimed at reconciling the state-recognized Catholic community in China with the underground church. At the heart of the deal, which has been kept secret, is the appointment of bishops who will be recognized by both Beijing and the Vatican. 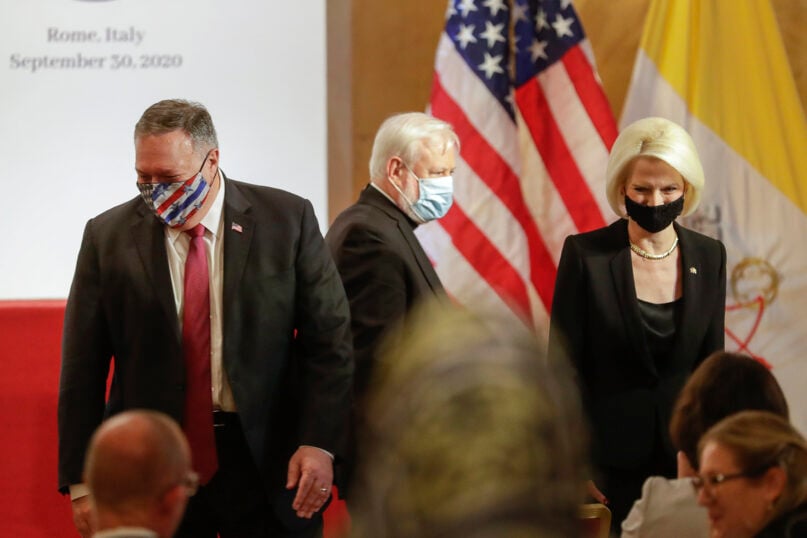 The agreement, which is up for renewal in the coming weeks, has been controversial among Catholics, with some hoping it will open a door to broader rights for Catholics and others saying it hinders the church’s moral authority to call out human rights violations in China.

Pompeo made his position clear in a Sept. 18 opinion essay in the conservative American journal First Things, in which he urged the Vatican to not renew the deal with China at the risk of compromising its “moral witness.” He renewed his appeal on Wednesday, asking the Vatican to not trade its moral integrity for realpolitik.

“Ultimately our efforts are constrained by the realities of world politics,” Pompeo said, but he added that “the church is in a different position. Earthly considerations should not discourage principled stances based on eternal truths.”

Italian media reports suggest that the Vatican’s Secretariat of State was less than pleased with Pompeo’s last-minute decision to visit Rome, which was viewed as unwarranted “interference.” At the symposium, Gallagher said: “It should come as no surprise that the protection and promotion of religious liberty is one of the main political priorities of the Holy See. In its bilateral relations the question of protecting religious freedom so as to allow the local Catholic Church to exercise its mission remains an indispensable part of the scope and activity of the Holy See.”

After the conference, Gallagher told reporters that Pompeo’s First Things article “was received critically” at the Vatican.

According to Gallagher, the Holy See uses diplomacy to provide “a sort of moral compass” to the international community in the promotion of human rights and especially religious freedom.

“Pope Francis has continuously stressed the importance of mutual understanding among peoples and societies, among those with different religious convictions and those without, to work together toward peaceful coexistence and reciprocal respect,” Gallagher said.

This message, he added, is at the heart of the Document on Human Fraternity signed with the grand imam of Al-Azhar, Sheikh Ahmed el-Tayeb, in February 2019. It will also “likely be an important theme” in Francis’ encyclical “Fratelli Tutti,” which will be signed on Sunday.