BERLIN (RNS) — The man, a local baker, appeared one morning at Sukhavati, a Buddhist center for the dying in the north German spa town of Bad Saarow. ”His friends said he never talked about being a Buddhist,” Oliver Peters, head of spiritual care and volunteering at Sukhavati, said of the unexpected client, who died that evening. “Only one friend knew his little secret, but his wish was to live and die the Buddhist way.”

There is no single “way of death” in a faith that is the dominant religion across Southeast Asia and Japan, and rites vary greatly by region, culture, class and tradition. But Buddhism puts an emphasis on encountering death that is answering a call in the West for a more spiritual approach to palliative care, hospice service and chaplaincy programs.

“In Buddhism, there are a lot of texts and sutras that emphasize death and dying,” said Dr. Tuck Wai Chan, a physician in Singapore who has worked to bring Buddhist ideas about the end of life into hospitals. “In certain traditions, the whole purpose of Buddhist practice is about death and dying. … We know death well.”

In the past decade and more, a Buddhist end-of-life movement has sprung up in Western Europe, Australia, New Zealand and the United States, testifying to a need for spiritual accompaniment at the end of life that is felt not only by an aging generation of Buddhist converts and immigrants but to those who only know that a secular, clinical approach is not enough.

Buddhanet’s Buddhist Hospice Directory lists about 20 such hospices in predominantly English-speaking countries, as well as Taiwan, Malaysia and Singapore. There are many more, such as Sukhavati, not listed on the site.

At Sukhavati, Peters said the center looks to the teaching of Tibetan Buddhist wisdom, particularly the bestselling “Tibetan Book of Living and Dying,” by Sogyal Rinpoche.

In practice, this means the regular chanting of mantras, guided meditations on death and instructions from Sogyal Rinpoche’s book on the passages and obstacles faced in what are known as “the bardos” — the liminal states between death and rebirth.

Finally, the body is attended to for three days after death. Requiring special permission from the German health authorities, this time allows the deceased to be honored by family and friends, guided through the bardos, and for those left living to contemplate the separation of the body and mind at death. A Buddha at Sukhavati. Image courtesy of Oliver Peters

A belief in Buddhism is not required, Peters said: “We don’t want to make people Buddhists. Everyone can come here — Muslim, Christian, atheist.

“We want to help the people to live and to die how they believe and want,” he said. “It’s important for us, what someone believes. If someone is a Christian, we find a Christian priest. We try to be open.”

To that end, Peters and his team have worked with a range of religious leaders to provide spiritual accompaniment for the dying. Recently, Peters sat by a Muslim man’s bedside as an imam said prayers and recited verses from the Quran.

Peters tells of a client who came to spend his last day at Sukhavati despite never being interested in Buddhism. When Peters asked him why, he simply said, “I am here that you pray for me.”

People like this man, said Peters, “don’t really know where they are, but they like the environment or they’ve heard something about the Dalai Lama or think that Buddhists are quiet and peaceful. Maybe they don’t have a good history with Christianity and they think Buddhists are better with caring for the dying.”

But in the rising popularity of places like Sukhavati is an implicit critique of conventional Western views of life and death. Frank Ostaseski, Buddhist teacher and co-founder of the Zen Hospice Project in San Francisco, said that, in a consumerist culture often enchanted by youth, Buddhist hospice care is offering an alternative whose unvarnished view of death also offers a new perspective on living. It also suggests that people are realizing they don’t want to end their lives in the company of medical professionals, said Ostaseski, author of “The Five Invitations: Discovering What Death Can Teach Us About Living Fully.”

We don’t “want to just give this over to medicine anymore,” he said. “Death is much more than a medical event.”

Medical professionals from a variety of backgrounds have echoed Ostaseski’s point and are recommending that Buddhist principles be part of palliative and hospice care.

In a paper in the Journal of Pain and Symptom Management, co-authors Dr. Eva K. Masel, Dr. Sophie Schur and Dr. Herbert H. Watzke wrote, “Buddhist teachings may lead to a more profound understanding of incurable diseases and offer patients the means by which to focus their minds while dealing with physical symptoms and ailments.”

Buddhist spirituality, said Chan, the Singaporean doctor, doesn’t aim to alleviate fears about death by concentrating on an afterlife. “Buddhists reflect on difficult things like death in order to deal with it, to make a better life in full view of the difficult facts.

“One of the key principles of Buddhism is balance — between compassion and wisdom, faith and facts. It is like a bird with two wings. The balance makes us able to fly,” he said.

Nor does Chan advocate that medical professionals be involved in patients’ spirituality or use of Buddhism as a method of care. But he suggested that a basic literacy in Buddhism makes them able to provide compassion and comfort alongside medical insight.

“Medical science isn’t able to treat and cure everyone,” he said, “but they can provide comfort to everyone.”

That comfort can transform caregivers as well as patients. 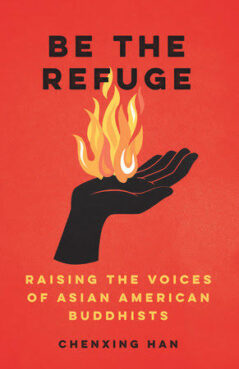 Chenxing Han, author of “Be the Refuge: Raising the Voices of Asian American Buddhists,“ spent a summer volunteering for the Brahmavihara AIDS Project in Cambodia, the country with the highest per capita concentration of Buddhists.

“It was a humbling summer,” she said. “I did not speak Khmer and my undergraduate degree had not taught me how to be present with people who are severely ill and dying. Many times I wanted to run away, to flinch from the reality before me.”

Her mentors at Brahmavihara helped her by modeling a spiritual care “suffused with steadiness, love, faith and compassion,” she said.

After her time in Cambodia, Han not only deepened her own Buddhist practice, but volunteered at the Pathways hospice in California’s Bay Area, then enrolled for formal training as a Buddhist chaplain at the Sati Center for Buddhist Studies in Redwood City, California.

“As a chaplain,” she said, “my work was not the same as hospice, though many of the patients I met died.

“For me, Buddhism isn’t all gloom and doom,” she said. “I appreciate Buddhism’s lessons for life and living as much as its insights on death and dying.”

Through her experiences, Han said, she learned that “the chaplain’s role is in many ways countercultural to the biomedical model of care.

“In the chaplain’s view, death is not a failure, but a sacred transition that awaits us all.”

Opinion
Monsters, meditation and Marie Kondo: the religious roots of Japan’s ‘waste not’ ethic
Follow us on Facebook!
Submit your photos to RNS