But when the same group was asked whether Black Americans encounter such bias, barely a third agreed.

When these “Fox News Republicans” were asked whether certain populations face a lot of discrimination, the top answers were Christians (73%) and white people (58%). Much smaller percentages said Black people (36%), Hispanic people (34%) and Asian people (27%) face the same bias.

Fox News Republicans — the 40% of GOP members who trust Fox News most among television news sources — as they are identified by PRRI, are more likely than Americans overall to identify as white evangelical Protestants (36% vs. 13%).

The report also notes that among religious groups, Fox News is most trusted by white evangelical Protestants (36%) — nearly twice the percentage of other religious groups. 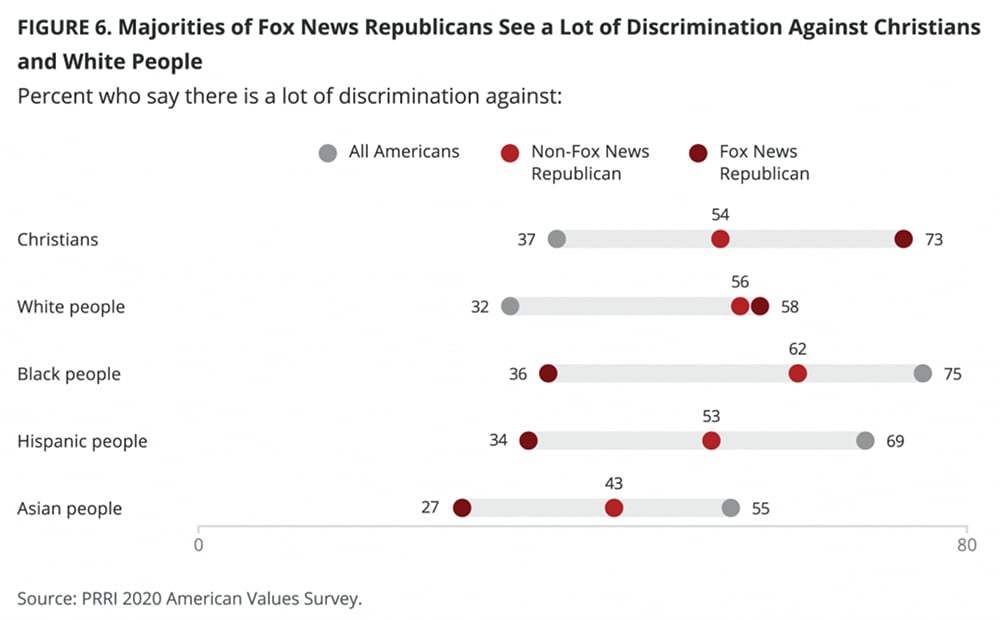 The numbers differed significantly from Republicans who don’t view Fox News as the most trusted source. Among that group, only a narrow majority said Christians (54%) face a lot of discrimination, slightly less than the number who said the same of white people (56%). Compared to Fox News Republicans, they were far more likely to say Black people (62%), Hispanic people (53%) and Asian people (43%) face a lot of discrimination.

Fox News Republicans are also far more likely than other groups to express positive views regarding the religious faith of Trump, who recently switched his religious affiliation from Presbyterian to non-denominational Christian.

More than 7 in 10 Fox News Republicans told PRRI that Trump models religious values with his actions and leadership. Less than a quarter of Americans overall said the same.

News
Base booster or blasphemy? Bible-quoting pro-Trump billboard raises eyebrows in Georgia
Follow us on Facebook!
Submit your photos to RNS