GRAHAM, N.C. (RNS) — This time, the three-hour march through Graham was peaceful.

Neither police nor sheriff deputies pepper-sprayed protesters, attempted to seize the PA system or arrested people for failing to disperse — as happened on Oct. 31, during a march to the polls, days before the 2020 election.

But the several hundred protesters, led by the Rev. Greg Drumwright, who marched on Sunday (Nov. 29) were no less adamant in their demands.

They called for the tearing down of the Confederate monument outside the Alamance County Courthouse, for the resignation of Sheriff Terry Johnson and, more generally, for criminal justice reforms.

As he has before, Drumwright, a 40-year-old pastor from nearby Greensboro, led the charge. This was his fourth protest in the small Southern hamlet in North Carolina’s Triad area (not to be confused with the Triangle region), and he began the march as he always does —  with a call and response:

“Did anybody bring a gun?” he asked.

“No!” thundered the crowd.

“Did anybody bring a knife?”

“Anybody bring weapons to use today?”

“Did anybody come in peace?”

Broad-shouldered with dreadlocks descending halfway down his back, Drumwright has become fluent in the art of protest and in the process has emerged as a national figure in the fight for racial justice. Animated by the Black Lives Matter movement and the anger over police brutality and systemic racism, Drumwright has taken nonviolent civil rights activism to various hot spots across the nation, but may have found his greatest impact in his native Alamance County.

On Nov. 19, three weeks after police broke up his march to the polls, the Alamance County Sheriff’s Office charged Drumwright with two felonies: assault on an officer and obstructing justice. Video of the event shows a brief tussle when law enforcement attempted to grab the protesters’ generator and Drumwright stepped in to intervene. (“I don’t see anything in that video that would justify those charges,” said Elizabeth Haddix, a lawyer representing Drumwright in a First Amendment lawsuit against the sheriff and the city.)

Sunday’s march was, at least in part, an effort to demonstrate that he will not be intimidated.

The 1.5-mile march, with stops at the county jail, the Police Department, the Sheriff’s Office and the courthouse, was closely watched by law enforcement officers, who followed the group but kept their distance as protesters raised their fists and chanted what have become familiar refrains in a season of nationwide protests: “No justice; no peace,” “This is what democracy looks like,” “No good cops in a racist system.” People participate in a march for criminal justice reform in Graham, North Carolina, on Nov. 29, 2020. RNS photo by Yonat Shimron

Throughout, Drumwright reassured the demonstrators they were part of something bigger.

“You may have heard what happened in Minneapolis, Minnesota, six months ago,” he shouted. “You may have heard about what happened in Louisville, Kentucky.There are too many cases and too many dead bodies. There are too many innocent folks locked up for us to be out here for Alamance County alone. We are out here because there’s a demand for criminal justice reform all over this country.”

Drumwright’s journeys over the past six months have placed him at the epicenters of the nation’s racial unrest. In February, after the death of Ahmaud Arbery, an unarmed Black man fatally shot while jogging near Brunswick, Georgia, Drumwright traveled there to meet with Arbery’s parents and to help the community heal.

Then came the killing of George Floyd, who died after a white police officer knelt on his neck for nearly nine minutes. Drumwright flew to Minneapolis to meet with Floyd’s family and befriended Floyd’s niece and nephew.

In between, he traveled to the Talladega Superspeedway in Alabama after someone hung a noose in the garage of NASCAR driver Bubba Wallace, who is Black. While there, Drumwright, who has now formed a yet unincorporated coalition, Justice 4 the Next Generation (J4NG), met with two NASCAR officials to talk about ways the predominantly white sport could push for greater racial diversity.

But Drumwright’s passion for justice was born closer to home — in Alamance County on the border between the cities of Graham and Burlington, where he grew up in public housing and attended a Pentecostal church.

“He felt driven,” said Jeri Rowe, a senior writer for High Point University who met Drumwright when — as a teen — Drumwright managed to get his church’s gospel choir an invitation to perform at the White House. “He felt moved to move. He was drawn by his own faith.” The Rev. Greg Drumwright, center left, leads a march for criminal justice reform in Graham, North Carolina, on Nov. 29, 2020. At center right, in a purple cap, is the Rev. Anthony Spearman, North Carolina president of the NAACP. RNS photo by Yonat Shimron

As an undergraduate at North Carolina Agricultural and Technical State University, a historically Black school, Drumwright was voted student body president. By his senior year, he was serving as a spiritual liaison to the undergraduate body and had formed a church called Citadel of Praise.

The nondenominational congregation of about 200, most of them college students, continues to meet, albeit online. Before the coronavirus hit, it had been meeting Sunday afternoons in rented space at a Seventh-day Adventist church adjacent to the campus.

“I saw the difference he was making in the lives of young people and how they were serving the community,” said Vanessa Cunningham, a retired professor of communication from A&T University who served as faculty adviser to the fledgling church, before joining herself.

Drumwright, who also taught music and English at local high schools and universities, earned a Master of Divinity from Wake Forest University and was nominated by the governor to serve as a public member of the North Carolina Courts Commission. In 2018, Drumwright ran for the Guilford County School Board.

He said he only reluctantly agreed to meet with activists in Alamance County’s African American community in June. But once he did, Drumwright said, he couldn’t sleep at night.

Long a conservative bastion, known for its provocative sheriff with a record of racism and intimidation, the county may end up providing Drumwright his biggest platform yet.

In 2012, Johnson, the sheriff, was accused by the U.S. Department of Justice of some of the country’s worst racial profiling. The DOJ found that the county’s Hispanic drivers were 10 times more likely to be stopped by a sheriff’s deputy for committing a traffic infraction than non-Hispanic drivers. He told his deputies to “bring me some Mexicans” and “go out there and get me some of those taco-eaters,” according to the federal investigation.

Johnson, who has been sheriff since 2003 and ran uncontested in 2018, has been accused of similarly targeting Black residents.

Last year, he signed a $2.3 million contract with U.S. Immigration and Customs Enforcement to house undocumented immigrants and asylum-seekers in the Graham jail.

Earlier this summer, the city of Graham passed an ordinance prohibiting more than two people from protesting without a permit. It was lifted under a court order.

Drumwright has sued the sheriff, the city’s mayor and county commissioners multiple times, alongside the NAACP, the American Civil Liberties Union and the Lawyers’ Committee for Civil Rights Under Law. 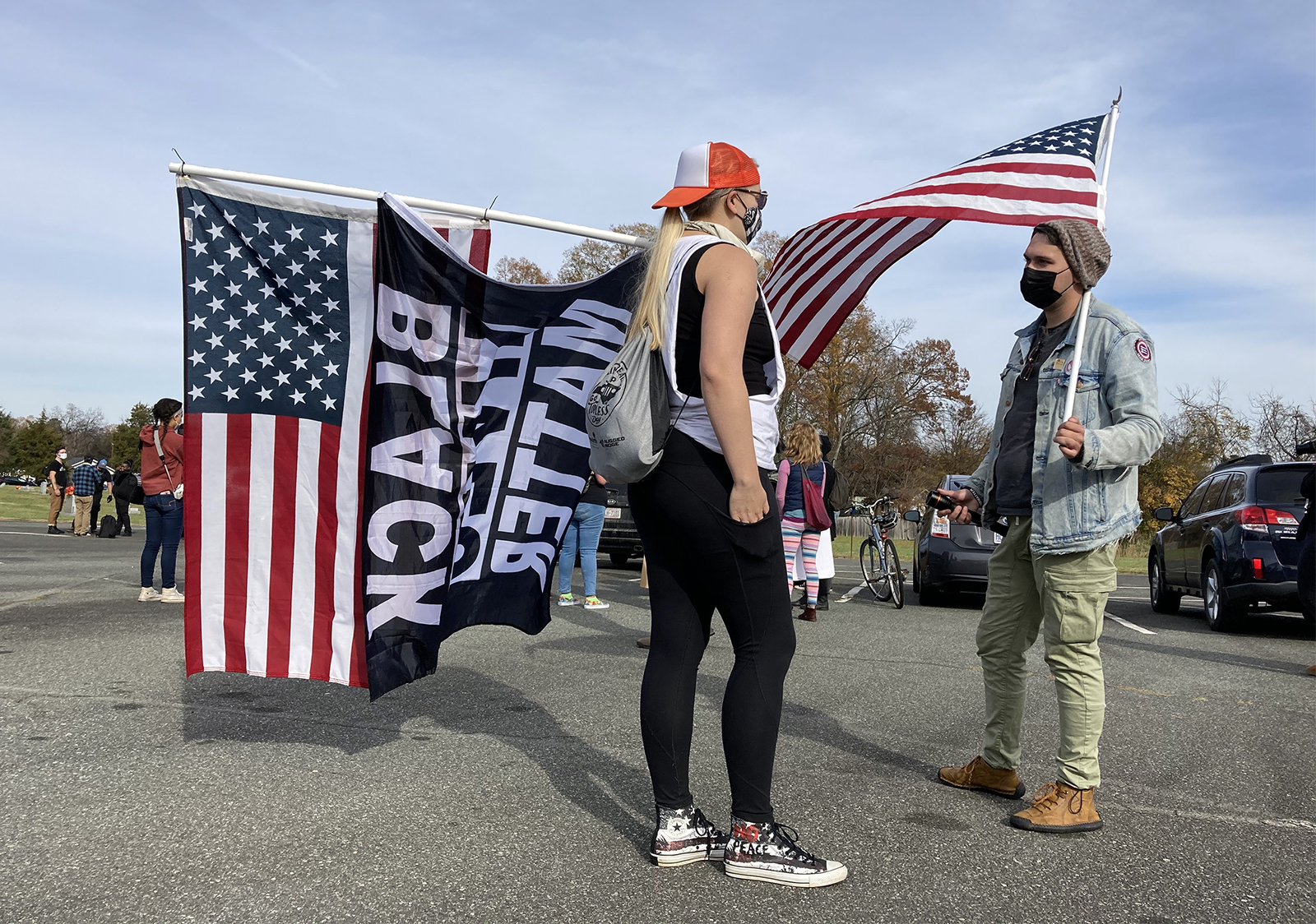 People chat prior to a march for criminal justice reform in Graham, North Carolina, on Nov. 29, 2020. RNS photo by Yonat Shimron

Some believe those legal challenges may have led Johnson to consider charging Drumwright with two felonies.

“It’s pretty clear they’re retaliating against Reverend Drumwright for continuing to speak out against white supremacy and racialized policing, excessive force and violation of people’s rights,” said Haddix, of Lawyers’ Committee for Civil Rights Under Law.

The Sheriff’s Office did not return requests for comment. Last week, a pastor of a nearby church said he heard the sheriff say in a closed-door meeting that he would be willing to remove the city’s Confederate statue. Johnson has not acknowledged saying so publicly.

The statue of a Confederate soldier holding a rifle is now surrounded by a metal fence and guarded by a sheriff’s patrol car 24 hours a day. The monument was erected by the United Daughters of the Confederacy in 1914 on the spot where in 1870 Wyatt Outlaw, a prominent Black councilman in Graham, was lynched.

“Terry Johnson, why don’t you take it down?” Drumwright taunted from behind a bullhorn on Sunday.

Drumwright has a sonorous voice that can be both calming and soothing and then turn loud, imposing and indignant.

“In the past year, I heard that anger in his voice,” said Rowe, who has known Drumwright for 25 years. “He’s felt moved to change things.”

Change was the overwhelming refrain at Sunday’s march.

“I believe change is within our reach,” Drumwright said repeatedly, even as law enforcement agents stationed on the courthouse roof looked down at the assembly. In this, he feels hopeful.

But he is also putting Alamance County on notice: “We will not let up until change comes down.”