VATICAN CITY (RNS) — Cardinal George Pell was not soured by his fall from the Catholic Church’s top ranks after he was accused of sexually abusing minors, the Australian prelate told reporters Wednesday (Dec. 16). Nor did the Vatican’s tepid defense of its former financial reform czar alienate Pell as he went to trial and was eventually acquitted on appeal.

“Right throughout Pope Francis was very respectful, as was the Vatican, of the due process in Australia, but he made no secret privately and to me of his belief that I was innocent and he supported me,” Pell said in an online news conference to publicize his new book, a prison journal.

Pell, 79, said his advanced age prevents him from returning in any formal capacity to his anti-corruption work in the Vatican.

In “Prison Journal Volume I: The Cardinal Makes His Appeal,” Pell recounts his spiritual journey as his trial and his successful appeal unfolded, while also addressing the division and intrigue he had left behind in Rome, including the possibility that his downfall was perpetrated by  enemies in the Roman Curia who objected to his cleaning up the Vatican’s fraught finances. 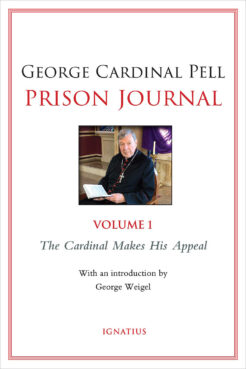 “I myself am quite confident that money did go from Rome to Australia about that time, but I have no proof about where it finished up,” the cardinal said on the subject, adding that “there is smoke, but we don’t have proof of fire.”

Later in the book he expands on a general discussion of good and evil by saying, “Every now and again, I felt that the forces against me were using deceptions, or misapprehensions or creating confusion and enhancing obscurity. I just thought there might just be whiff of evil about them.”

Pell also commented on his investigation by police in Australia, which has been under scrutiny since his acquittal, calling it “sloppy at best.”

Forgiveness is a recurring theme of his prison journal, and on Wednesday he said that if anyone in the Vatican meant him harm, “I will pray for them.”

In the book, Pell also reflects on the sexual abuse crisis in the Catholic Church, the resignation of Pope Benedict XVI and the Trump presidency.

Pell, appointed prefect of the economy in 2014, was called back to Australia in 2017 to face charges of sexual abuse. In December 2018, he was found guilty and sentenced to six years in prison, but he won his appeal to the High Court of Australia in September 2019 and returned to Rome after four months in his native country.

Since his acquittal, media reports in Australia and Rome have suggested that prelates at the Vatican paid local officials to bring Pell to trial to stop him from continuing his investigation of ongoing financial scandals.

Pell told the press that he hasn’t met with Cardinal Angelo Becciu, one of those who has been associated with several deals under scrutiny. Recently Francis stripped Becciu of his privileges as a cardinal, but he has not been charged with wrongdoing.

Pell did meet his replacement as prefect for the economy, Monsignor Antonio Guerrero, whom he called “capable and honest.”

The cardinal also met with Emeritus Pope Benedict XVI, whom he considers a like-minded voice on the challenges facing the Catholic Church. But the cardinal objected to Benedict’s historic resignation, fearing its repercussions on the unity and stability of the Catholic community.

“I haven’t met a single person here in Rome who doesn’t believe that we need protocols in place for popes who choose to retire,” he added.

Pell said he will certainly return to Australia, where public opinion was divided over his case. Some hailed him as a martyr to anti-Catholic sentiment while others viewed him as the symbol of a corrupt system. His No. 1 concern during his trial, he told reporters, was that a guilty verdict would lead many to abandon the Catholic faith, but that the letters of support he got “confirmed to me something that I have said many times: God writes straight in crooked lines,” he said.

In solitary confinement for 23 hours a day in a 6-foot-wide cell, he learned to look on his sentence “as a gift and a grace.”

While unable to say Mass for the first time in decades for the over 400-day duration of his imprisonment, Pell said he took refuge in reading the breviary and keeping up to date with sports games and the news.

“My jail time doesn’t give me nightmares,” he said, adding that he hopes that the journal will be not only “an historical record of strange times,” but also an inspiration “to help other people, not just those in jail, who are going through tough times.”

The cardinal was asked about a reference in the book to President Donald Trump as “our Christian barbarian.” While acknowledging that Trump was an “unusual president” and criticizing the American president for his disrespect for the political process, Pell praised Trump’s foreign and economic policies, as well as his appointments to the Supreme Court.

“On the whole, I think Trump has made a positive contribution to the Christian cause,” he added.

He offered a defense too of conservatives in the church. “I think we definitely have big work to do to sensitize people to the beauties and the value of what some people call social conservatism,” Pell said, adding that this includes Christian teaching and its ability to allow for human flourishing.

But key to that effort will be combating sexual abuse, which he called “a solemn obligation,” Pell said. Returning to his view on the battle between cosmic forces, Pell said that “there is certainly evil at the heart of the pedophilia crisis and amongst the people who have abused and damaged these young people so very badly.”