(RNS) — The end of the world begins with a con.

A little lie, told by a petty grifter, who is willing to betray his friends and neighbors for a few small pleasures, leads to another lie, and then another, and finally to the unraveling of the ties that bind us together.

As the old camp song goes, it only takes a spark to get a fire going.

It can all happen in what seems like the blink of an eye, as C.S. Lewis, the Christian apologist and beloved children’s author, warns in “The Last Battle,” the flawed final chapter of the Chronicles of Narnia, which I found myself rereading as 2020 dwindled down to its last days.

Often overlooked if not dismissed for its colonialist racism, “The Last Battle” won the 1956 Carnegie Prize, Britain’s top literary award for children’s books.

According to Lewis, the end of Narnia — a land of talking beasts and magical creatures that the Oxford don invented at the beginning of World War II — begins in a time of peace and leisure. All is well in the land. Until it’s not.

Things begin to fall apart after a talking ape named Shift stumbles across the skin of a lion floating in a pool beneath a waterfall. Shift, who is filled with petty ambition — he can never find enough bananas or oranges at the local market and is always getting his best friend, Puzzle the donkey, to do all the dirty work — decides to turn the lion skin into a costume.

He then convinces Puzzle to impersonate Aslan, the Jesus-like leonine eminence of Lewis’ allegory, who has long been absent from the land.

With Puzzle’s false Aslan by his side, Shift begins to order his fellow Narnians around. First, he tells them — in Aslan’s name — to gather the nuts that he loves. Then, as the fake news of Aslan’s return spreads, he orders the sacred trees of the forest to be cut down and shipped to merchants from Calormen, the empire to the south, whose leaders have long coveted Narnia’s prosperity. Finally, Shift exiles his fellow Narnians to serve as indentured servants.

All of this leaves the Narnians confused and heartbroken. They have long adored the stories of Aslan, a kindhearted leader who always protected the talking beasts of Narnia. But their love is betrayed with lies and cruelty.

When they complain, Shift claims he is making Narnia great again.

“It’s all arranged,” he tells them. “And all for your own good. We’ll be able, with the money you earn, to make Narnia a country worth living in. There’ll be oranges and bananas pouring in — and roads and big cities and schools and offices and whips and muzzles and saddles and cages and kennels and prisons — Oh, everything.”

The king of Narnia, with the help of several English schoolchildren who have come to his aid, eventually discovers Shift’s deception and tries to undo it. But it is too late. Shift simply claims it was Puzzle who was impersonating Aslan, and sics a mob on him.

“By mixing a little truth with it they had made their lie far stronger,” Lewis writes.

In the end, Narnia is overrun by Calormen soldiers and its citizens turn on each other. Because of Shift’s lies and the fake news about Aslan, no one is willing to trust anyone or to even look for the truth when it is right in front of their face.

The country falls apart and eventually, the world itself falls apart. 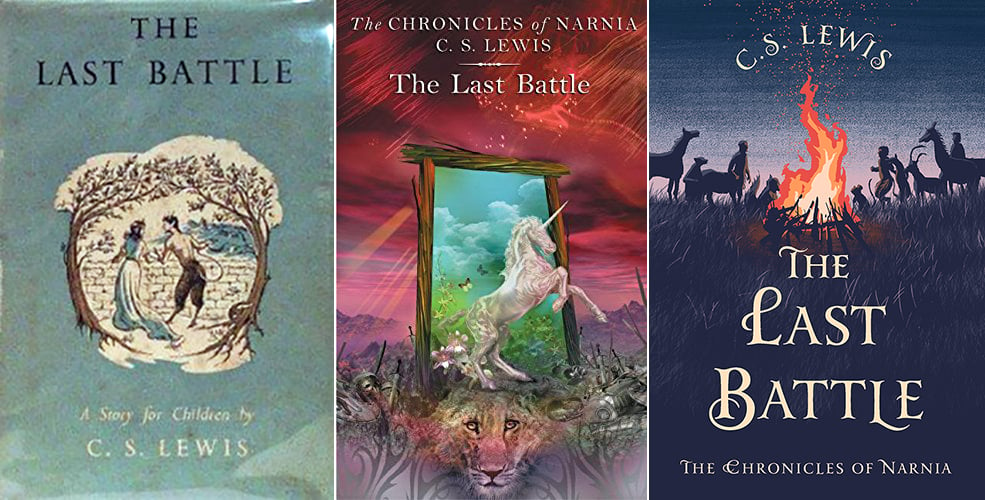 A variety of covers of “The Last Battle” by C.S. Lewis. Courtesy images

There’s a lesson in “The Last Battle” for America in 2020, said David Dark, professor of religion and the arts at Belmont University in Nashville.

“We have to sweat the details,” he said. “Righteousness has to be sought in the specifics if it’s to be sought at all. Generalization, as Lewis understands, is tyranny’s fuel supply. Specificity cuts it off.”

He pointed to what poet William Stafford refers to as “many a small betrayal of the mind” — small deceptions add up quickly, till we can no longer tell right from wrong, truth from a lie.

“Jesus of Nazareth gives us a devastatingly cryptic warning over how easily we can get lulled —and lull ourselves — into certain madness,” said Dark. “He speaks of perception which, when darkened, fills your whole life with darkness.”

Betrayals large and small haunt most of the stories Lewis tells of Narnia.

A boy betrays his brother and sisters for a few bites of Turkish delight. Rather than admit her own defeat, a queen murders her sister — and her people — using a spell called the “Deplorable Word.” An adviser spies against a king and kidnaps his son.

Shift sells out his people for a few oranges and bananas and a pile of nuts.

Almost all the betrayals on which the series turns are small acts that have disastrous consequences and may never be put right. Trust, Lewis seems to say, takes years to build, and is so easily undone. Every word we say, everything we do, has consequences.

Lewis makes the same point in an essay called “The Weight of Glory,” based on a sermon he once gave, warning students not to take the people around them lightly.

“There are no ordinary people. You have never talked to a mere mortal. Nations, cultures, arts, civilizations — these are mortal, and their life is to ours as the life of a gnat. But it is immortals whom we joke with, work with, marry, snub, and exploit — immortal horrors or everlasting splendors.”

“The Last Battle” has issues. The dark-skinned Calormenes are “unmistakable Muslim stand-ins,” as the writer Gregg Easterbrook once put it, cruel-hearted worshippers of a false god. Susan Pevensie, one of the heroines of Chronicles, is noticeably absent and dismissed as “no longer a friend of Narnia” for being too interested in “nylons and lipstick and invitations”­­ ­— a jab that critics call sexist and even fans say is out of keeping with the soul of Narnia.

But its pleasures are undeniable — for a book about the end of the world, for one thing, it is remarkably cheerful. Its depiction of what comes after the end of the world — an afterlife set in a cool and fresh and lovely countryside filled with joy — is a delight for the eye and the ear. (British actor Patrick Stewart’s reading of the audio version of the book is lovely.)

There are many surprises as well, including a rebuke of one of the main characters for “mansplaining”; a surprising ecumenical twist when a Calormene soldier, who follows the god Tash, is welcomed by Aslan; and a lovely scene where a group of Narnians and English children run up a waterfall and find a walled garden surrounded by a high wall. When they knock at the gate, they find that the gatekeeper is none other than Reepicheep, a gallant and courageous mouse from a previous tale.

All told, the book ends with joy and delight — things in short supply these days.

But it is darker warnings of “The Last Battle” that remain with a reader today. The lies one person told for his own gain undermined the trust that held a once-beloved country together. And once trust is lost, it is almost impossible to regain.

The Narnians learned that too late.

By telling their story, Lewis hoped we’d listen and avoid their fate. 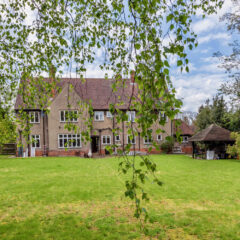 News
Tolkien fans hope to turn his house into a ‘Rivendell’ for writers and filmmakers
Follow us on Facebook!
Submit your photos to RNS