(RNS) — The flags emblazoned with “Jesus 2020” and the cross, the most easily recognizable symbol of Christianity, were hard to miss amid the mob of President Trump supporters who stormed the Capitol grounds and, eventually, the building itself.

But they weren’t the only religious symbols that appeared during the siege Wednesday (Jan. 6) in Washington, D.C.

Some have pointed out the tattoos sported by one of the most prominently photographed rioters — a shirtless man wearing fur and horns and red, white and blue face paint.

The man, since identified by multiple media outlets as Jake Angeli, better known as the “QAnon Shaman” or “Q Shaman,” is covered in several tattoos, among which are symbols associated with heathenry, or Norse paganism.

Lea Svendsen, a heathen author, said it was “heartbreaking” to see her articles of faith at the center of the violence.

“We don’t want to make people uncomfortable,” Svendsen told RNS. “We don’t want them to feel unsafe, because we’re allies, we are here for them, we’re part of the community, we’re neighbors.”

Angeli, whose real name is Jacob Anthony Chansley, was arrested Saturday and charged with knowingly entering or remaining in any restricted building or grounds without lawful authority, and with violent entry and disorderly conduct on Capitol grounds, according to the Washington Post.

He is a vocal supporter of conspiracy theories associated with QAnon, an elaborate conspiracy theory whose adherents are devoted to President Donald Trump, and he’s a fixture at right-wing political rallies in Arizona, according to Reuters.

Angeli has also shared a “mishmash” of religious sentiments on his Facebook page, which since seems to have disappeared, according to The Wild Hunt. The Pagan website pointed out posts filled with “Pagan imagery,” mixed in with “affirmations of Christianity,” as well as a description of himself as a “shamanic practitioner and energetic healer.”

His tattoos include a number of Heathen symbols, including three interlocking triangles called a valknut; Mjölnir, Thor’s hammer; and a tree The Wild Hunt noted may represent Yggdrasil, the sacred tree in Norse cosmology. 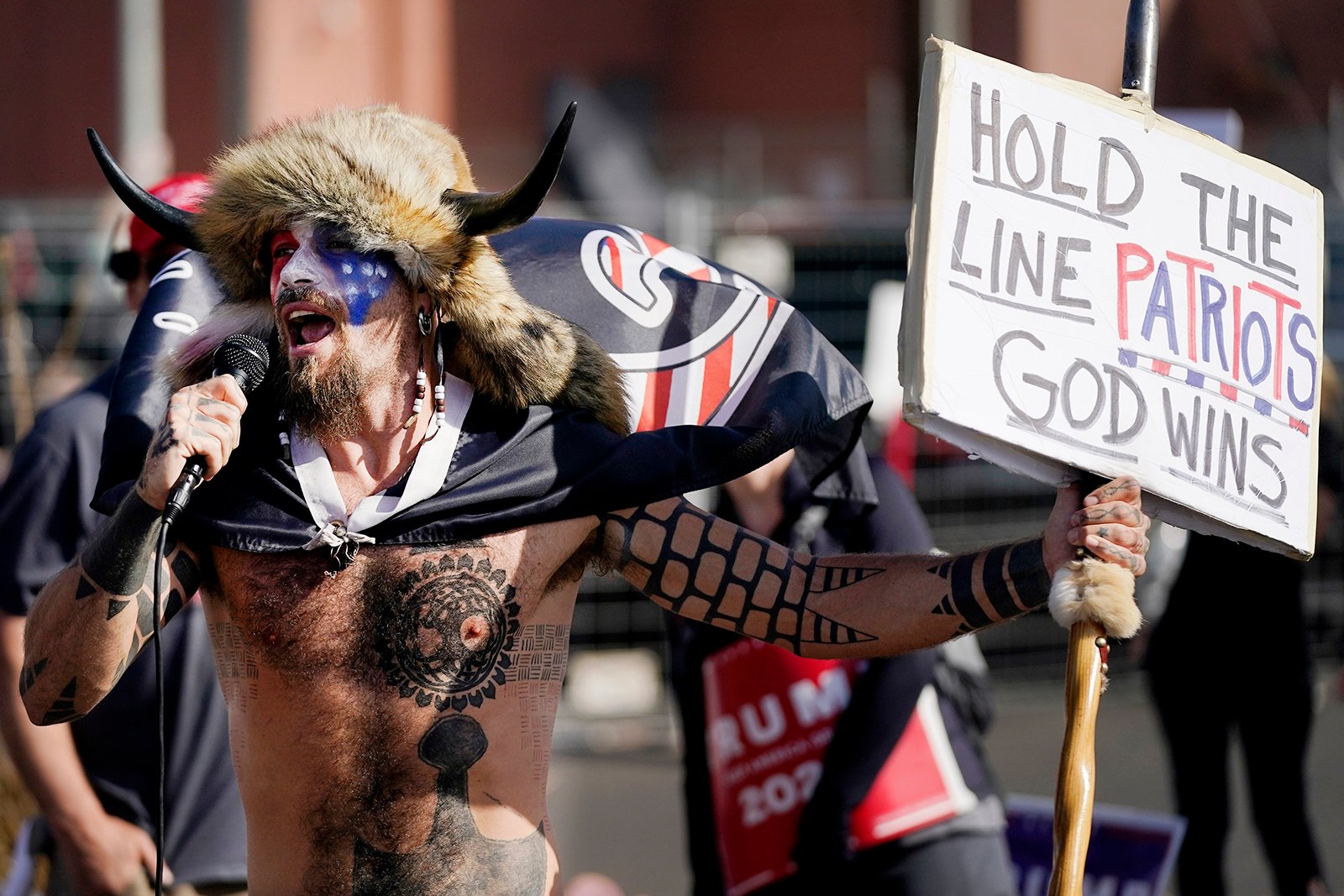 It’s unclear whether Angeli adheres to heathenism or has merely appropriated the symbols. In a blog post, Jason Mankey, editor of Patheos’ Pagan channel, acknowledged that some pagans have stumbled into QAnon conspiracy theories online, where discussions about aromatherapy and herbalism can devolve into baseless fears about microchipped vaccines.

But it’s also the case that Norse iconography and religion have been widely appropriated by white supremacists — who were also seen among the mob in photos and video captured Wednesday inside the Capitol — since Nazis seized on them as part of the history and culture of an imagined master race, Svendsen said.

That’s not what those symbols stand for, according to Ethan Stark of Heathens Against Hate.

Mjölnir in particular is the “most recognized and widely used” symbol of heathenry, Stark said. It likely was adopted in response to crosses worn by many Christians as Norse cultures converted to Christianity, he said, and has become popular again as many people have rediscovered Norse religions. But its widespread use among white supremacists has caused confusion.

The Anti-Defamation League notes that the symbol must be judged in context, and “one should never assume that the Thor’s Hammer appearing by itself necessarily denotes racism or white supremacy.”

RELATED: Witches to GOP: If you summon a demon, have a plan to banish it (COMMENTARY)

Heathens Against Hate and others also took issue with Angeli’s horned headdress.

“As a devotee of the Horned God, I’m especially sickened by Angeli’s perversion of the horns,” Mankey wrote.

“For me those horns represent oneness with the Earth, the pursuit of knowledge, and the liberation of the oppressed. The sickened MAGA crowd that stormed the Capitol building shares none of those values, and I hope Angeli is soon brought to justice, gets the mental health assistance he most obviously needs, and is then sent away to rot in jail for twenty years.”

Several individuals and organizations have pointed out that the headdress resembled a Sioux war bonnet.

“The greater victim of appropriation is the #FirstNations #Sioux, whose sacred headdress reserved for warrior men of particular merit, is being worn by the vile and undeserving,” Heathens Against Hate tweeted.

The organization is one of several that was quick to speak out against Wednesday’s riot at the Capitol and any association with paganism or heathenry.

The Troth, an international heathen organization, noted that “several of those who have been most visible in these events have also been bearing symbols many of us hold very dear and even sacred” in a statement published online Wednesday. It condemned the violence and the misinformation and rhetoric that fueled it.

“Tonight, we join with faith leaders from around the globe in a prayer for peace to settle over the United States and that a calm and orderly transition of power continues,” it said at the time.

It’s important to speak up, Svendsen said, because she doesn’t want anyone — especially people of color or LGBTQ people — to feel uncomfortable around her as a visible heathen who wears those symbols as articles of faith. To her, white supremacy is the antithesis of her beliefs.

She pointed out that those myths are full of stories about Odin, chief among the Norse gods, and his pursuit of wisdom, wherever it may come from.

“He wants to learn everything he can about the world in order to protect it, and it doesn’t make sense to have a god who’s going to be all about wisdom while excluding 99.9% of the wisdom that’s out there,” she said.

“So it’s very much a problem that’s been ongoing, and, unfortunately, this is not the first time. It’s not the last time.”

Editor’s note: This article has been updated to include Angeli’s arrest.