LOS ANGELES (RNS) — Nearly a year ago, four young people of different faiths — Baha’i, Christianity, Islam and Judaism — moved into a Los Angeles home as part of a new interfaith experiment known as the Abrahamic House.

Hadar Cohen, Ala’ Khan, Maya Mansour and Jonathan Simcosky were chosen as fellows for this project, in which they kept their day jobs and lived rent-free, while organizing and hosting public interfaith events and programs.

They moved in just weeks before the coronavirus outbreak sparked stay-at-home orders across country, settled in amid the uprisings ignited by the police killing of George Floyd and are leaving the house just days after supporters of President Donald Trump besieged the U.S. Capitol.

The four officially wrapped up their fellowship on Sunday (Jan. 10) with a virtual graduation where they shared the lessons they learned from one another during the tumultuous year. The application process for a new round of fellows, who are expected to move in in August, will open in May. People from all over the U.S. are encouraged to apply.

Mohammed Al Samawi, a Muslim man from Yemen who founded the Abrahamic House, reflected on the deadly occupation at the Capitol, in which religious imagery and conspiracy theories played center stage, and highlighted how interfaith work can help dispel misinformation and stereotypes.

His vision for this project, he said during the virtual graduation, was to have people of different faiths not only celebrate their similarities and differences, but also “speak about the truth, only the truth, not conspiracy theories.” Al Samawi, who now lives in Los Angeles, endured threats for his interfaith advocacy in Yemen that he recounted in his memoir, “The Fox Hunt.”

Back in the spring, the fellows spoke to Religion News Service about how they were adjusting to California’s public health orders and to each other’s religious practices, like fasting in preparation for the Baha’i new year or honoring Shabbat, a day of rest. 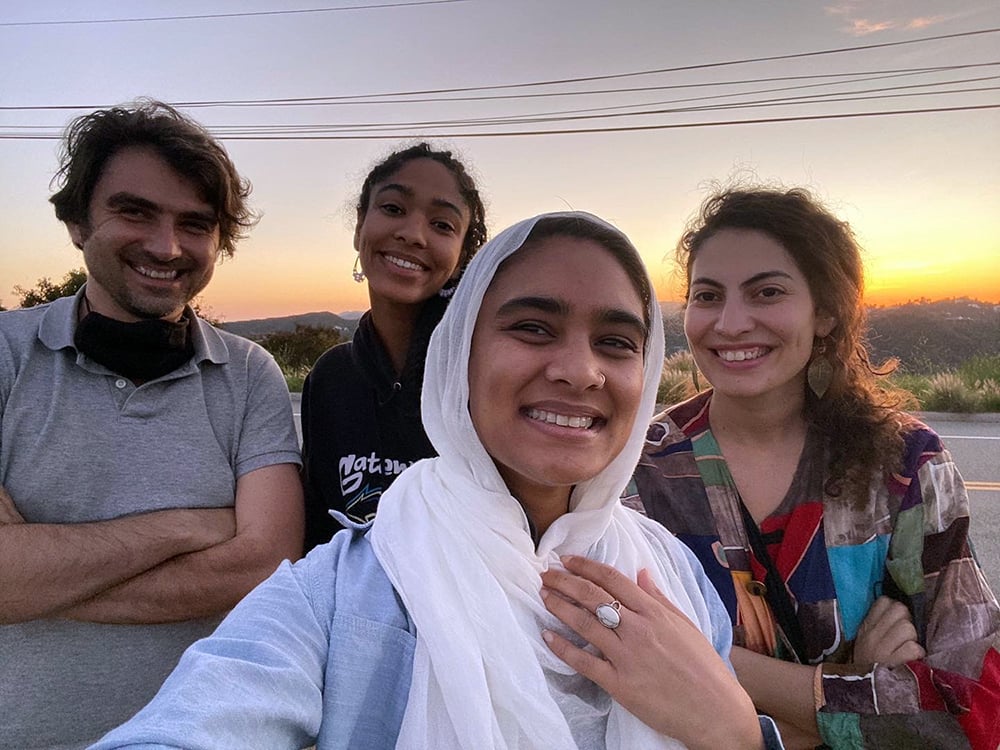 The four fellows of Abrahamic House, Jonathan Simcosky, from left, Maya Mansour, Ala’ Khan and Hadar Cohen, pose for a selfie while watching a sunset in the Los Angeles hills in celebration of the start of Ramadan, April 23, 2020. Photo by Ala’ Khan

The way Mansour, of the Baha’i faith, sees it, “We’ve been given such a year that’s ripe with opportunity to show up for each other in solidarity,” she said on Sunday.

The fellows, during their graduation, spoke about the initial difficulties of celebrating Easter, Ramadan, Passover and Ridvan, a Baha’i observance, in April amid quarantine and without their respective communities.

To Simcosky, a book editor who is Christian, bringing in these diverse experiences during their first full month at the house “was a powerful opening to the year.”

For Cohen, celebrating the Jewish holidays without her community was challenging.

“For all the fellows, the holidays are the time where we really get into our spiritual faith and into our community,” she said.

However, Cohen added, “it did provide us opportunity to show up for each other and to learn what is important about the holidays for one another.”

Khan, a filmmaker who is Muslim, spoke fondly of “Religion 101″ classes the fellows held for each other to not only learn historical context, but also how “we connect with each of our faiths and our personal practices and how it manifests in our daily lives.”

“That felt really special and really important because no one religion is monolithic. There’s such diversity within religion,” Khan said during their graduation. “To understand someone’s personal grounding in that was really special.”

Throughout the year, the fellows hosted more than 30 programs that included a documentary screening on Zoom about a binational day of prayer at the U.S.-Mexico border in San Diego with Muslim and Christian leaders; a virtual multifaith feminism event in honor of Shavuot, a Jewish holiday that celebrates wisdom, by staying up all night to learn; and an online artist talk series featuring women of color and how spirituality influences their work.

Aside from hosting these events, living under the same roof also enabled the fellows to have nuanced conversations about issues unraveling around them. They said they spoke often about how to best look out for each other’s safety during the pandemic, what it means for a Black person to live through the social upheaval they were experiencing, and how Muslim and Jewish people face Islamophobia and anti-Semitism. Race and religion and religious oppression were common issues of discussion. For Simcosky, being an ally to people of different faiths and races “has to be an authentic expression of care for the community.”

“It comes through proximity and through sharing all these experiences, and through a curiosity of learning about what is challenging,” he said on Sunday.

Khan, on Sunday, shared how these conversations were a reminder “not to have assumptions and to just listen.”

“We had to get really real and really listen to each other,” she said.

To Mansour, it was significant that the Baha’i faith, which normally isn’t included in interfaith work, was part of the fellowship. That’s why it was important for Mansour to amplify the voices of other faiths not represented in the fellowship, like the selfless service of the Sikh community, which the fellows highlighted through a documentary screening.

The fellows on Sunday shared how the Abrahamic House helped them realize the importance of sharing their faith more openly with others.

At the Abrahamic House, Cohen said, she became aware of how much she has kept her “Jewishness hidden” because “there’s a lot of fear, the hatred that comes with it.”

Khan said the Abrahamic House helped deepen her relationship with her own faith. Now, she feels more comfortable sharing her religious practices with the people around her, who are mostly not Muslim.

“I feel like I’m taking a confidence about sharing more specific practices with others,” she said.