VATICAN NEWS (RNS) — Pope Francis sent an encouraging message to the newly elected president of the United States, Joe Biden, on the day of his inauguration, asking God to grant Biden “strength and wisdom.”

“Under your leadership, may the American people continue to draw strength from the lofty political, ethical and religious values that have inspired the nation since its founding,” the pope wrote in the message released on Wednesday (Jan. 20).

Pope Francis said the “grave crisis facing our human family calls for a farsighted and united” response, especially concerning the most vulnerable and the poor.

“I likewise ask God, the source of all wisdom and truth, to guide your efforts to foster understanding, reconciliation and peace within the United States and among the nations of the world in order to advance the universal common good,” the message read.

Biden will be the second Catholic to take the presidency in the United states and has quoted Pope Francis, especially his last encyclical on human fraternity, “Brothers All,” on several occasions.

It is custom for popes to send a message for the inauguration of the U.S. president. In 2016, Francis wrote a similar message to President Donald Trump, mentioning the “humanitarian crisis” taking place globally and the need for a preferential treatment for the poor.

But unlike with Trump, Vatican observers see many points in common between the Argentine pontiff and Biden, especially concerning the environment and immigration.

While Biden got a thumbs-up from the Vatican, there may be tensions between the U.S. Conference of Catholic Bishops and the Biden administration on Catholic morality issues.

“I must point out that our new President has pledged to pursue certain policies that would advance moral evils and threaten human life and dignity, most seriously in the areas of abortion, contraception, marriage, and gender,” read a statement released by the USCCB on Wednesday.

“Of deep concern is the liberty of the Church and the freedom of believers to live according to their consciences,” read the message, signed by USCCB President Archbishop Jose Gomez of Los Angeles.

“Catholic bishops are not partisan players in our nation’s politics,” he added, praising Biden’s “call for national healing and unity.” Gomez asked the new president to engage in conversation with Catholic bishops to address abortion and family policies, which he said “would go a long way toward restoring the civil balance and healing our country’s needs.”

The archbishop expressed satisfaction in the “unique” opportunity of working with Biden, who as a Catholic “clearly understands, in a deep and personal way, the importance of religious faith and institutions.”

News
At inaugural prayer service, a message of renewal and ‘repairing the breach’ 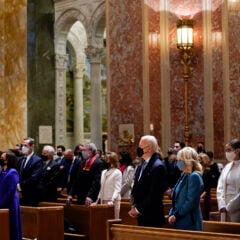