JERUSALEM (RNS) — The color purple appears several times in the Bible, usually in a robe draping one of the kings of ancient Israel. But the search for an authentic artifact dyed the royal color from the time of King David has always proved elusive.

That changed this week, after researchers from the Israel Antiquities Authority, Bar Ilan University and Tel Aviv University said they had identified pieces of fabric dyed “true purple” dating to the 10th century BCE, when the Hebrew Bible says David and Solomon ruled in Jerusalem.

“This is the first piece of textile ever found from the time of David and Solomon that is dyed with the prestigious purple dye,” Naama Sukenik, curator of organic material at the Israel Antiquities Authority, said in a joint statement. 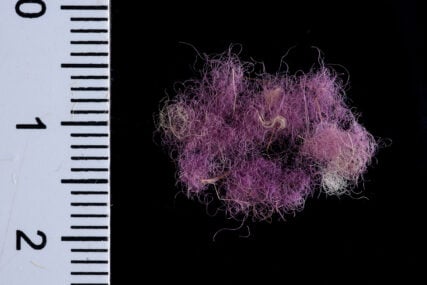 Wool fibers dyed with pink-purple hues. The excavated materials from the Timna Valley in southern Israel were dated to ~1000 BCE. (Photo by Dafna Gazit, courtesy of the Israel Antiquities Authority) 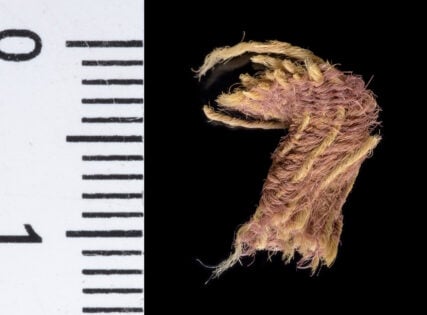 The three scraps were among several discovered by archaeologists in recent years in the Timna Valley, the site of a vast ancient copper mining operation in southern Israel. Direct carbon dating revealed that the fabrics hark back to about 1000 BCE.

Timna was likely part of the kingdom of Edom, bordering the kingdom of Israel to the south. The biblical Book of Samuel relates how David and his army battled and conquered the Edomites.

The Old and New Testaments mention that David, Solomon and the priests of the Jewish Temple, as well as Jesus some centuries later, all wore purple garments, and according to ancient sources, purple textiles were highly valued and a symbol of nobility. Slaves’ Hill in the center of the Timna Valley. (Photo courtesy of Erez Ben-Yosef and the Central Timna Valley Project)

Sukenik said that the vast majority of the ancient textiles excavated by archaeologists around the world were dyed with colors derived from plants. But the purple dyes in the Timna Valley find were made from another source: the secretions of mollusks.

“The use of animal-based dyes is regarded as much more prestigious, and served as an important indicator for the wearer’s high economic and social status.”

The remnants of the purple-dyed cloth that archaeologists unearthed at Timna “are not only the most ancient in Israel, but in the Southern Levant in general,” she said. The only other true purple-dyed textiles found in the region were from the Roman period: two from Masada and three from a cave in the Judean Desert.

To determine which mollusk species produced the dyes found on the Timna textiles and how the various hues were created, researchers identified dry molecules belonging to specific sea mollusk species.

Zohar Amar, a professor from Bar Ilan University, traveled to Italy, where mollusks are a favorite dish and therefore plentiful, to help reconstruct the precise origin of the dyes. The process “took us back thousands of years, and has allowed us to better understand obscure historical sources associated with the precious colors of azure and purple,” Amar said. 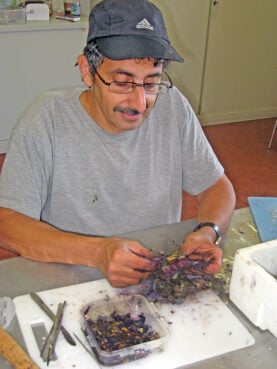 The researchers, who published their findings in the journal PLOS ONE, believe that in order to produce the vivid purple and azure (tekhelet) dyes worn by King David and Jesus, biblical-era dyers had to extract tiny amounts of dyestuff from thousands of mollusks, and then exposed it to varying amounts of light. More light produces azure; less light, purple.

Discovering ancient textiles made of perishable organic materials such as wool is exceedingly rare because they decompose quickly. The arid conditions at Timna preserved the fabrics.

As a result of the region’s bone-dry climate “we are able to recover organic materials such as textile, cords and leather from the Iron Age, from the time of David and Solomon, providing us with a unique glimpse into life in biblical times,” said Erez Ben-Yosef, an archaeologist at Tel Aviv University. “The state of preservation at Timna is exceptional.”

Although archaeologists have not found any permanent settlements in Edomite territory, Ben-Yosef said, the fact that the textiles were discovered there indicates that the nomads who resided there lived in a “stratified society” and that some people must have had elite status and wealth. 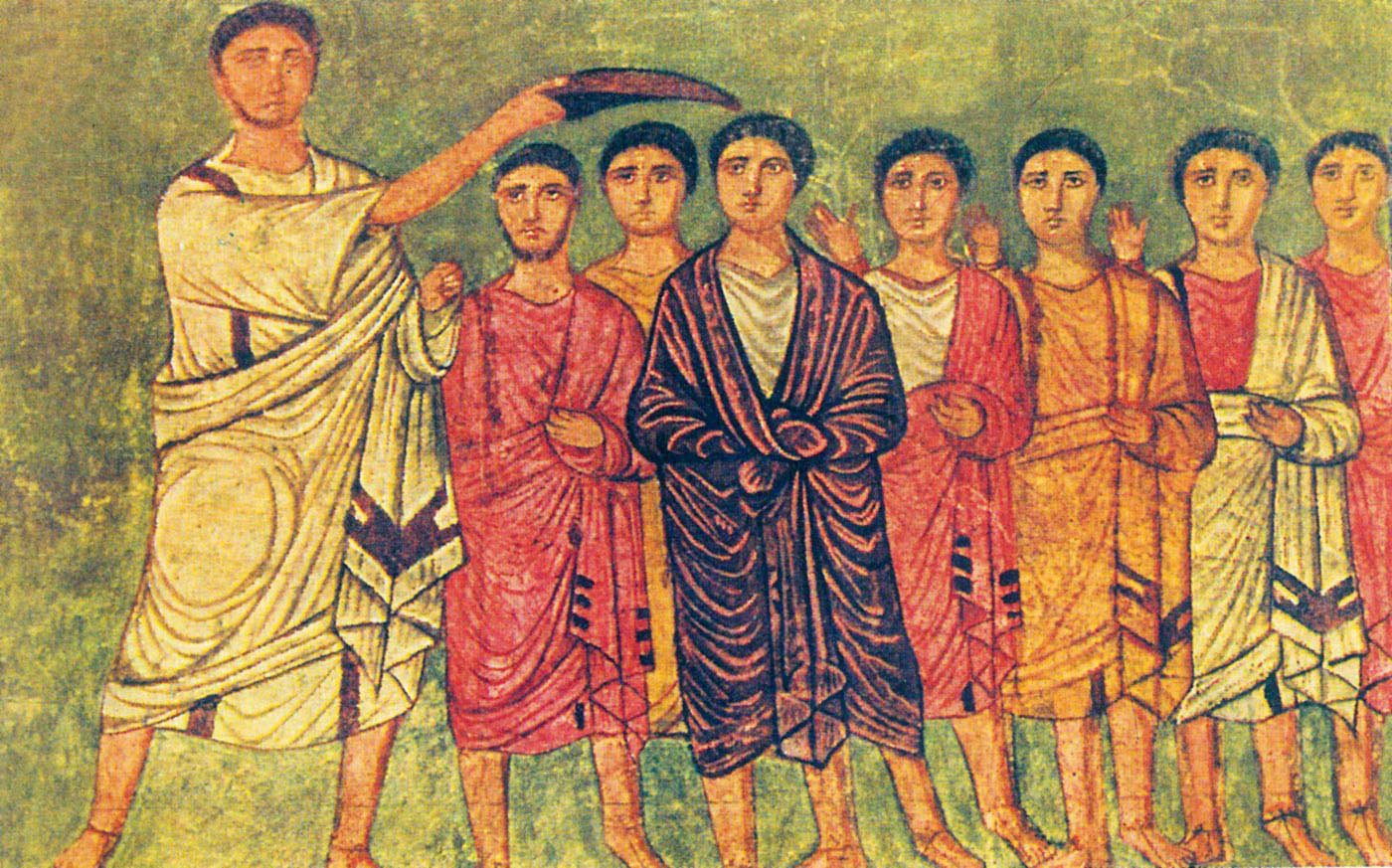 The research at Timna “has showed us that even without such buildings, there were kings in our region who ruled over complex societies, formed alliances and trade relations, and waged war on each other.”

A nomadic society “was not measured in palaces and monuments of stone,” he said, but in items that were valued at the time.

Ben-Yosef said this insight can be applied to the kingdom of David, which archaeologists continue to search for. Many believe that excavations conducted near the Old City of Jerusalem have unearthed the palace. Others are less certain.

If the buildings excavated in Jerusalem were built by someone other than David, there is no need for despair, Ben-Yosef said. “The wealth of a nomadic society was not measured in palaces and monuments made of stone, but in things that were no less valued in the ancient world,” like purple dye.

“David may not have expressed his wealth in splendid buildings,” he added, “but with objects more suited to a nomadic heritage such as textiles and artifacts. It is wrong to assume that if no grand buildings and fortresses have been found, then biblical descriptions of the United Monarchy in Jerusalem must be literary fiction.” 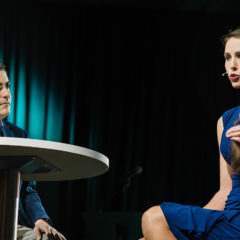 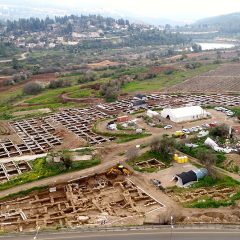 Opinion
In the wake of the Pittsburgh shooting, finding a new Jewish voice at Shavuot
Follow us on Facebook!
Submit your photos to RNS