(RNS) — Martin Gugino took the long view when he heard a grand jury declined to indict two Buffalo police officers who were seen shoving him to the ground during a protest outside City Hall last year.

Gugino said he heard the felony assault charges against Buffalo officers Robert McCabe and Aaron Torgalski were dropped from a reporter who called him Thursday night (Feb. 11).

In a call with RNS, he seemed stoic.

“There’s a great deal of work that needs to be done,” said the 76-year-old Catholic peace activist. “It’s one more setback. This whole story has been ‘go forward a little bit; push back a little bit.’ As Martin Luther King said, ‘The moral arc of the universe is long, but it bends toward justice.’”

In a video of the June 4 incident, Gugino was seen approaching Buffalo police in riot gear during a demonstration over the death of George Floyd. (Gugino believed the city-imposed curfew was unconstitutional and tried to approach the officers to discuss it with them.) Two officers pushed him away. He fell back, cracking his head open and visibly bleeding on the sidewalk as the police officers walked past him.

The video went viral and became symbolic of the kind of police brutality that has sparked calls for fundamental reforms to American policing.

Buffalo police suspended the two officers. That, in turn, led to the resignations of all 57 members of the Buffalo Police Department Emergency Response.

Prosecutors charged the officers with a felony as required by New York state law when a victim is at least 65 and the suspected perpetrators are at least 10 years younger. 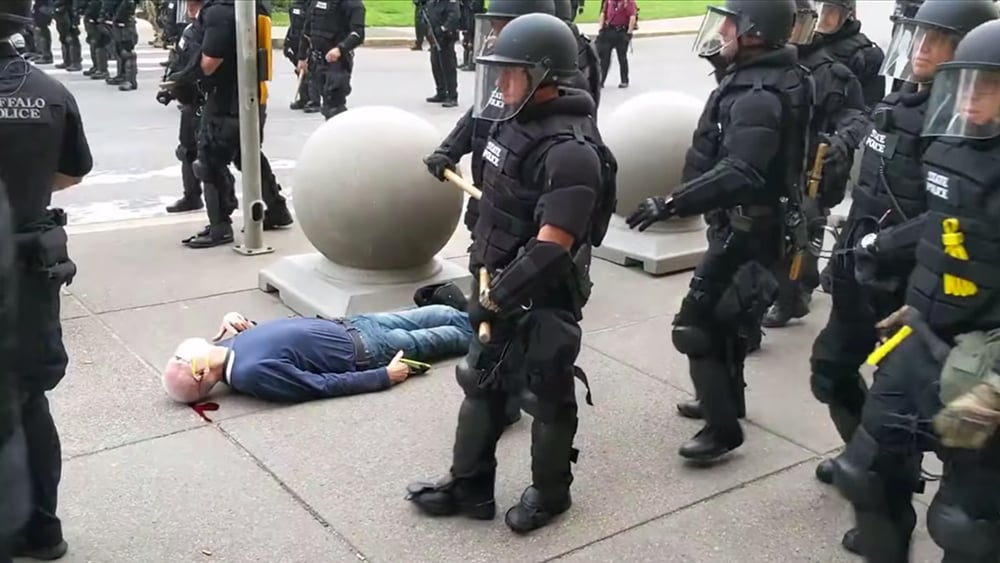 Erie County District Attorney John Flynn said prosecutors made a thorough presentation to the grand jury but, citing secrecy rules, said he couldn’t discuss what witnesses were called or what evidence was presented.

Gugino ended up in intensive care after he fractured his skull and suffered a brain injury. He spent nearly a month at Erie County Medical Center and later moved in with his out-of-state nieces to continue his recovery. He is now living on his own in Buffalo, but he lost hearing in one ear and still is unstable while walking.

He declined to talk about filing a civil suit against the officers but said his lawyers were working on it. Kelly Zarcone, one of his lawyers, did not return messages.

Gugino is staunchly committed to nonviolent protest and likes to point to the clause in the First Amendment that speaks of “the right of the people peaceably to assemble, and to petition the Government for a redress of grievances.”

He has protested in support of Black Lives Matter and in opposition to Guantanamo Bay, the U.S. detention camp in Cuba where terrorism suspects are detained without due process. Gugino has also been supportive of a group of Catholic peace activists who broke into a nuclear submarine base in Kings Bay, Georgia, in 2018 to protest nuclear weapons.

Over the phone Friday, Gugino preferred to talk about the country’s systemic problems with law enforcement.

“What I’d like to talk about is the First Amendment,” Gugino said. “Something needs to be done. We have a problem. It starts with a ‘P.’”

(The Associated Press contributed to this story.)