LOS ANGELES (RNS) — The public will have a chance to honor and bid farewell to the late Rev. Frederick K.C. “Fred” Price, a prominent Los Angeles pastor who built one of the largest church buildings in the nation, at a pair of closed-casket viewings next week.

The “lying in repose” closed-casket viewings will be from 11 a.m. to 5 p.m. PST on March 4 and March 5 at the FaithDome at Crenshaw Christian Center.

“Amid COVID-19 realities, the family is acutely aware and deeply concerned for the safety of others. Strict adherence to all safety protocols is appreciated and will be enforced,” the church said in a statement.

Yumiko Whitaker, a church spokeswoman, told Religion News Service that only a certain number of people will be allowed inside at a time. She said physical distancing and other guidelines of the federal Centers for Disease Control and Prevention will be strictly enforced. Everyone attending will be required to wear a mask.

A private family service before the burial on March 6 will be streamed on the church’s social media accounts.

He was the longtime pastor of the Crenshaw Christian Center, which he founded in 1973 and which grew into a megachurch with a reported 28,000 members. The church is widely known for the “FaithDome,” which opened in 1989 and seats 10,145 worshippers, making it the largest house of worship in the country at the time, according to the Los Angeles Times.

The Crenshaw Christian Center in Los Angeles, known as the FaithDome. Courtesy photo

Price eventually started a new church with no denominational ties, which grew from about 300 worshippers to a congregation of thousands.

In 2008, Price was named an “apostle,” according to the biography posted on the church’s website. After retiring as pastor of Crenshaw Christian Center, he handed the pulpit over to his son, Frederick K. Price Jr.

Price is survived by his wife of 67 years, Betty Ruth Price; his four children, Angela, Cheryl, Stephanie and Frederick; 10 grandchildren; and five great-grandchildren, the church said. 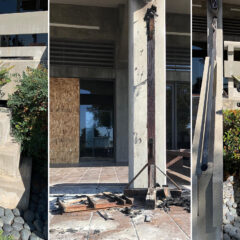