(RNS) — Even among the diverse membership of the Skokie School District 73.5 Board of Education, Bushra Amiwala stands out. At just 22 years of age, Amiwala is the youngest elected Muslim official in the United States. She is also a former student in the school district and is featured in a Hulu documentary, “Our America: Women Forward,” which began streaming earlier this week.

Born to a Pakistani immigrant father who worked his way from busing tables to owning a clothing store, Amiwala doesn’t let setbacks faze her. At just 19 years old, she ran as a Democrat for the Cook County Board of Commissioners in her native Illinois. She was the youngest person ever to put her name on the county ballot. Larry Suffredin, the incumbent, re-entered the race late in the campaign and emerged victorious. Meanwhile Amiwala won 26.5% of the vote — good enough for second place.

The septuagenarian Suffredin, a 16-year incumbent, took the ambitious teenager to a pancake breakfast after the campaign, which Amiwala says encouraged her to seek other electoral opportunities.

“I think she is a rising star in whatever she chooses to do,” Suffredin told RNS. He recalled being impressed with her grasp of property taxes and other issues when he debated her at a League of Women Voters event. “I encouraged her to finish college and stay active in politics if that is what she wanted to do.”

RELATED: Muslim candidate for Manhattan DA runs to give victims of system a ‘seat at the table’

Amiwala took the defeat in stride and Suffredin’s advice. She graduated from Chicago’s DePaul University in 2020 with a degree in management information systems and two minor degrees in community service studies and public policy. She soon launched her second campaign, this time for SD73.5 Board of Education, and was elected in April 2019. In addition to her unpaid job on the school board, she works full time for Google.

Amiwala sees her political participation as a form of activism. She said she became interested in politics following her AP government class in high school and internships on political campaigns. 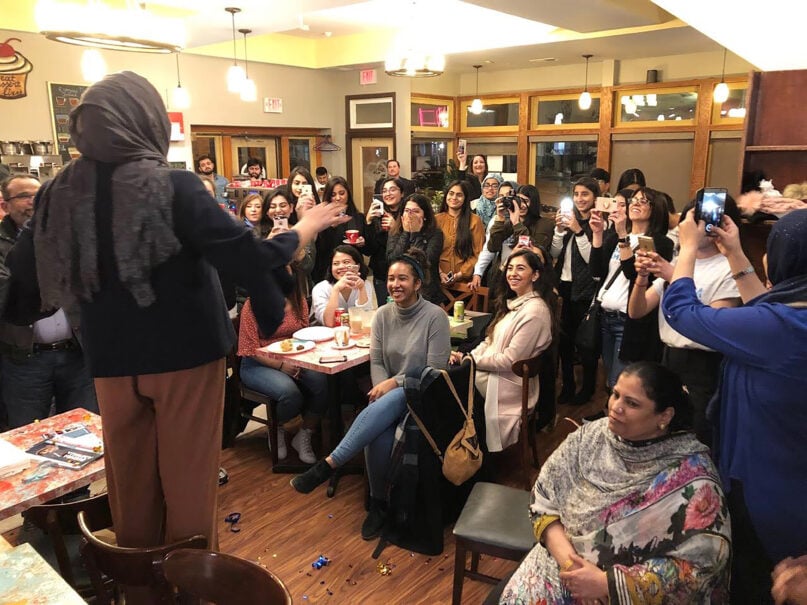 Bushra Amiwala, left, addresses a group of friends and family after winning her election in April 2019. Photo courtesy @bushraamiwala/Twitter

She includes Vice President Kamala Harris, former first lady Michelle Obama and Rep. Alexandria Ocasio-Cortez (D-N.Y.) as some of her political heroes, along with other elected Muslim women in the United States, like Rep. Ilhan Omar (D-Minn.) and Rep. Rashida Tlaib (D-Mich.).

Above all, she is inspired by her immigrant parents who escaped what Amiwala described as “extreme poverty in Karachi” when they moved to the United States. “My father rose from busing tables and flipping burgers to taxi driver and eventually became the owner of his own business: the Chicago Style men’s clothing store,” Amiwala said.

Amiwala’s rise reflects the changing religious and ethnic diversity of Skokie, which most Chicago residents know as the northern terminus of the Yellow Line. “Skokie has a growing Muslim population, but the Muslim community has built strong bridges and made allies with other parts of the community. Here, you see ‘Skokie Loves Diversity’ yard signs. That is very different from a lot of communities,” she said.

“I have been a champion of equity in the district, whether that’s changing Christopher Columbus day to getting a more diverse teaching staff,” said Amiwala, who is a founding member of the district’s equity board.

She is also seeking to introduce measures to the school board, which will bring the Jewish holidays back to the school calendar (they were recently removed, even though 30% of the community is Jewish), as well as adding Muslim and Hindu holidays. And she is part of calls to rename the local youth Little League organization, the Skokie Indians, which has existed in Skokie since the 1950s. The name of the town comes from the Potawatomi word for “marsh.”

Originally founded as a German-Luxembourger farm town in the late 19th century, Skokie’s demographics have shifted rapidly in the last few decades. Jewish immigration to the town, which began prior to World War II, accelerated after that conflict, bringing many Holocaust survivors to the community. Bushra Amiwala, left, helps with tickets at the international fest held in her school district to celebrate diversity in February 2020. Photo courtesy @bushraamiwala/Twitter

“It is really exciting to have Bushra on the board,” says Emily Twarog Miller, who is also a member of the school board. “As a former student in the district she brings a number of insights. She also brings attention to issues that others might not have looked at, like the importance of offering halal meats on the lunch menu for our large population of observers of those dietary concerns.”

Miller, who is Jewish, points out that the school board now includes members of all three Abrahamic religions. The town of 64,000 is an increasingly diverse one. The town offers everything from an African grocery store to a synagogue for the deaf that opened in 1972. The Illinois Holocaust Museum and Education Center opened in northwest Skokie in 2009. Skokie residents of all faiths enjoy Kaufman’s Bagel & Delicatessen, which has been open since 1960 — Amiwala, who is herself an avid baker, goes there for the chocolate doughnuts.

“I grew up in Maine, and Skokie is a completely different environment for me to raise my kids in,” said Miller. “Immigrants, anyone, can come from all over and feel that this is somewhere they can settle down.”

“Skokie has changed over time, but what hasn’t changed is it’s a very welcoming community,” she added.

For her part, Amiwala continues to bring national attention to Skokie. Not many school board members have twice met U.S. Vice President Kamala Harris or are followed on Twitter by Rep. Ilhan Omar (D-Minn.).

Amiwala’s age and status as the youngest elected Muslim official and the only one wearing a hijab in the state of Illinois have brought her fame not normally associated with being an elected school board commissioner. She is routinely tapped to speak at forums and other events around the country on Islamophobia and women in politics. In addition to the Hulu documentary, she has been featured in two different television documentaries, including “And She Could Be Next” on PBS and on Amazon Prime’s “RUN,” the series.

A book deal to tell her story, something she has dreamed of doing for six years, is currently in the works. She is up for re-election to the school board in April 2023 but openly admits she is keeping her eye on other potential offices.