(RNS) — In early March, Harry Schmidt learned the answers to questions some religious conference organizers may be asking: What’s it like to hold an in-person event in the midst of an ongoing pandemic?

When more than 300 planners and exhibitors gathered in North Carolina at the Religious Conference Management Association’s annual meeting, they got a glimpse of what could be ahead for their upcoming convocations, synods and general assemblies:

Attendees walked along one-way aisles in the exhibit area, where they could speak face-to-face — or, rather, mask-to-mask — but there was no handing out of “trade-show tchotchkes.”

Registrants were screened before entering the building and given a QR code to present once they were inside.

“It really became a great model,” said Schmidt, president and CEO of the Indianapolis-based association that worked in collaboration with regional convention and public health officials in planning the event.

“Everybody wore a mask at all times except for when they were actually consuming food.”

Religious conference planners and exhibitors, like the hundreds gathered in early March in Charlotte, are waiting to hear whether their meetings will go on as expected this year and contemplating how those conferences will look as the pandemic continues and vaccination levels increase.

Schmidt said the RCMA meeting included planners and suppliers from 34 states. Thirty-one percent of the people who gathered — from Seventh-day Adventists to Pentecostals to Methodists — were first-time attendees.

Many of RCMA’s members didn’t meet last year as the COVID-19 rates spiked during the summer and surged again in the fall during months that religious conventions often are held.

“Large meetings, by and large, were canceled,” he said of RCMA’s membership, many of whom found virtual alternatives to be cost-prohibitive.

“There’s going to be definitely an uptick in third-quarter meetings, faith-based meetings, and much heavier in the fourth quarter,” Schmidt predicted.

In the meantime, some summertime meetings are being scheduled across the country.

The Southern Baptist Convention, which canceled its annual meeting last year, has plans to reconvene June 15-16 in Nashville, Tennessee, but is monitoring advice about large gatherings from local health officials and the Centers for Disease Control and Prevention. 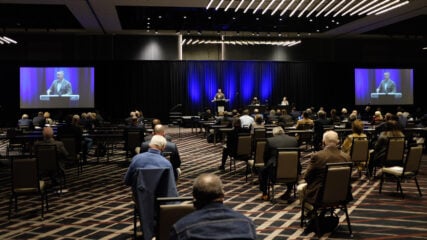 “The SBC Executive Committee is actively monitoring COVID-19 in our region,” said Jon Wilke, media relations director for the Nashville-based Executive Committee. “We also understand there are questions as to how COVID-19 may impact the upcoming SBC Annual Meeting.”

The African Methodist Episcopal Church is planning its General Conference for July 6-10 in Orlando, Florida, according to a February announcement.

“However,” wrote Bishop John F. White of the commission planning the event, “I want to assure the Connectional Church that the Commission continues to monitor conditions in the United States and abroad that may affect our gathering and will have in place plans to meet those contingencies.”

Meanwhile, the African Methodist Episcopal Zion Church has not yet made a decision on its General Conference that is currently postponed until July 28-Aug. 1 in Atlanta.

Other groups are planning a virtual meeting later in 2021 or postponing their meetings until 2022.

The National Council of Churches’ Christian Unity Gathering, which was held online in the fall of 2020, is scheduled online again for Oct. 11-12, said Cynthia Griffiths, director of communications and development. She noted that the 2020 registration topped 1,200, when in-person gatherings had previously totaled between 200 and 300.

“These figures show that online events have the potential to be accessible to and attended by more people,” she said. “After 2021, we may consider ‘hybrid’ events that are offered both online and in-person.”

Schmidt said hybrid meetings, which are still in development stages, may be a wave of the future for religion-related conferences.

“Into ’22 and beyond, you’re going to probably see a blend and a marriage of the hybrid and in-person model because you actually have the potential of having a far greater outreach numerically,” he said.

Calvin College postponed its Festival of Faith & Writing until March 2022 but noted on its website “we have already reserved March 16-18, 2023” if a 2022 gathering does not occur.

Global meeting planners are also scheduling gatherings that will take place next year.

The National Religious Broadcasters’ annual convention was postponed from March to June 21-24 this year — and squeaked in last year before pandemic shutdowns. 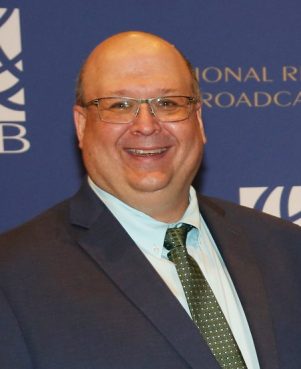 When they meet in person, NRB CEO Troy Miller said he expects to follow local rules in Grapevine, Texas, and will work with hotel property managers on social distancing guidelines.

“We’ve expanded our ballroom footprints, our exhibit floor and other areas so that we can effectively social distance for any of the sessions or dinners,” he said. “We expect to exceed whatever the hotel is asking us to do to keep everybody safe.”

Miller said attendees seem ready for an in-person gathering where networking might be easier than in a virtual setting. NRB could have more than last year’s almost 3,000 attendees if registrations maintain their current pace. Exhibitors have been so interested, he added, planners have twice increased the exhibit floor size.

“We’re excited,” Miller said. “Most people are just really hungry, we’re finding, to get back and get together.” 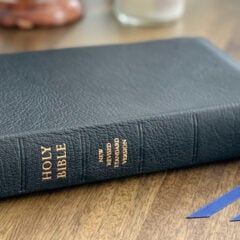