(RNS) — Faith leaders in Georgia are fighting back against a new law that bans offering food and water to people waiting in line to vote, with many voicing opposition or planning protests against a statute they say targets people of color.

Religious leaders were quick to criticize the sweeping new elections bill, known as SB 202, signed into law by Gov. Brian Kemp on Thursday (March 25). A group of Black faith leaders gathered at the Statehouse that same day to voice opposition and call for a boycott of certain corporations, such as Coca-Cola, they argued did not do enough to resist the bill.

The group briefly met with Lt. Gov. Geoff Duncan and, according to The New York Times, African Methodist Episcopal Bishop Reginald T. Jackson told Duncan during the meeting the bill’s various provisions were racist and constituted “an attempt to turn back time to Jim Crow.”

Now other faith leaders say they plan to protest the law’s passage by marching from an Atlanta church and leaving water bottles for legislators at the Georgia Capitol on Wednesday (March 31). The leaders, who believe the new legislation will adversely affect the voting rights of Black, Latino and elderly voters, also plan to leave water at Kemp’s door.

“We’re going to share water with our legislators and elected officials, the very act that is criminalized by SB202,” Graham Younger, Georgia director for Faith in Public Life, told Religion News Service. “We’ve spent several election cycles working for everyone to have the freedom to vote. We are showing them the fairness and hospitality they are not showing to Georgia.” 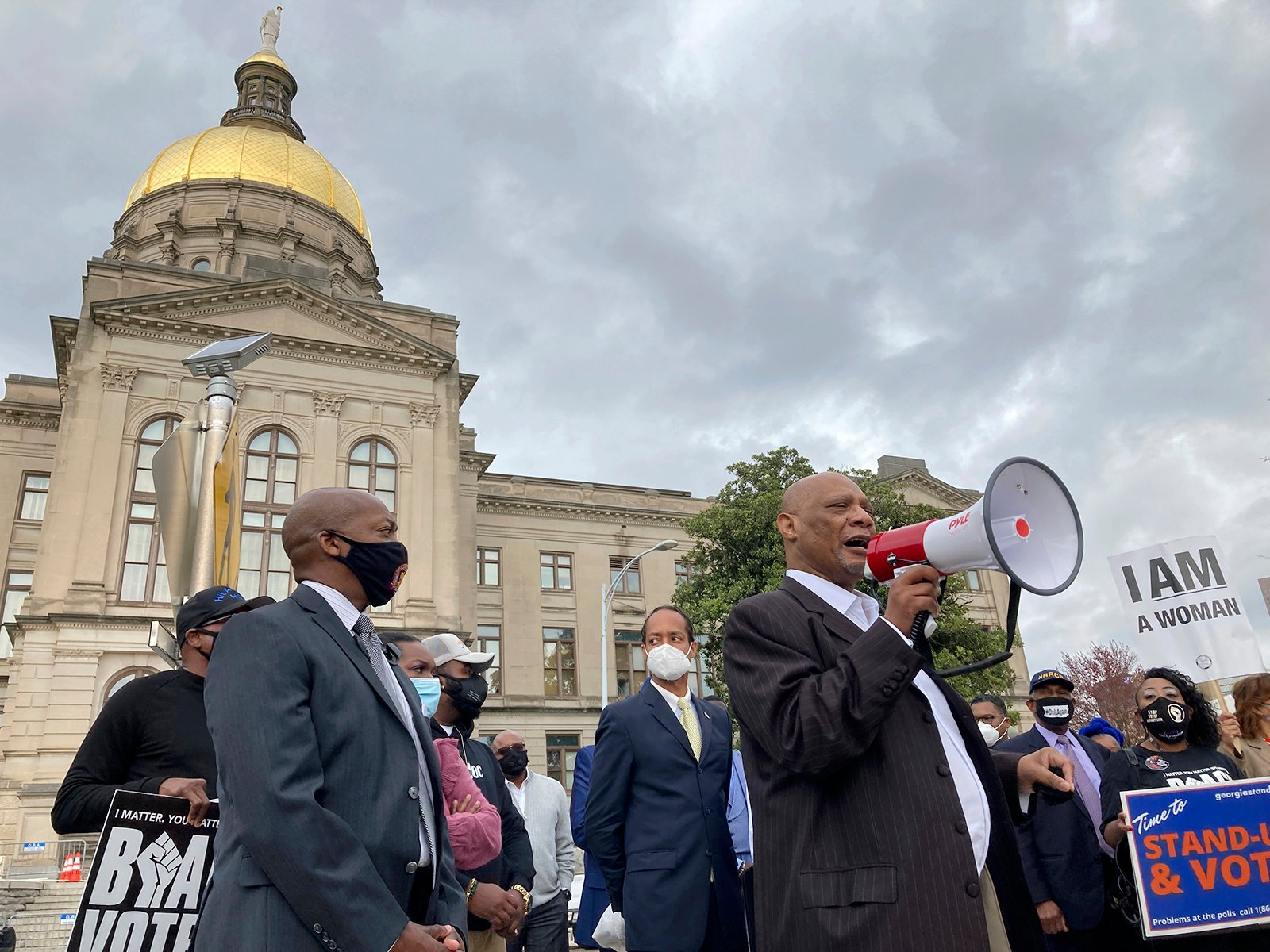 Faith leaders also have joined in a suit filed Wednesday in an Atlanta federal court charging that various provisions of the new law are unconstitutional and violate a section of the Voting Rights Act that prohibits denying or abridging the rights of voters on the basis of their race or color.

“Countless Black Georgians waited for hours in needlessly long lines, where they were comforted and sustained by free water and refreshments offered by an array of civic and religious organizations, including parishioners of Plaintiff Sixth District of the African Methodist Episcopal Church,” notes the suit filed Wednesday by civil rights groups on behalf of the AME Church, Georgia Muslim Voter Project, and other organizations.

The suit also cites the First Amendment rights of the church — namely, its right to political speech and expression — as it conducted “line warming” practices of providing food and water, describing it “as part of conveying their message of the importance of staying in line, the value of each individual’s vote, and their inherent value as a person.”

Earlier in the month, Faith in Public Life collected more than 500 signatures on a petition delivered to Kemp that condemned proposed changes in voting policies they said would particularly harm people of color. Fair Fight Action, another group that supported the petition, had received reports of people fainting as they stood in long lines outside polling places during the 2020 election.

“They want to make it a crime to bring grandma some water as she is waiting in a line they are making longer,” he said. “Make no mistake: This is democracy in reverse.”

Meanwhile, other faith leaders have declared on social media their willingness to openly defy the ban on offering food and water to voters. One pastor, Abby Norman, has set up a form for white women to volunteer to get arrested handing out water to Georgia voters.

If ten minivans full of white women showed up to Brian Kemps office, do you think he would take our call? Yes you measure KARENs in minivans. Duh. https://t.co/4BF2cVcIKz

And then there are legal questions as to whether the law violates the rights of faith leaders who see offering food and water to voters as a religious act. In the 2020 election, several groups organized “poll chaplains” in states across the country — including hundreds who were trained in Georgia — to assist voters stuck in long lines. Participants included Catholic nuns, rabbis and other faith leaders who handed out food and water while seeking to offer a peaceful presence at the ballot box.

There is precedent for courts siding with religiously rooted activists who see offering sustenance as a spiritual act. In February 2020, a federal judge reversed the convictions in United States v. Hoffman of four faith-based volunteers who were fined and put on probation for leaving out water for migrants crossing the U.S.-Mexico border. The judge argued that the activists, whose group No More Deaths/No Más Muertes is an official ministry of the Unitarian Universalist Church of Tucson, were exercising their “sincerely held religious beliefs” and prosecuting them violated the 1993 Religious Freedom Restoration Act.

“Certainly there could be a similar religious challenge that folks have a religious obligation to provide food and water to folks exercising their constitutional right to vote,” she said.

She was echoed by Katherine Franke, a law professor at Columbia University who also filed an amicus brief in United States v. Hoffman highlighting the religious liberty claims.

Religious opponents of the Georgia law, she said, could “certainly try to raise religious liberty grounds for avoiding responsibility under the statute.”

But Franke and Platt both noted the law doesn’t just impact religious leaders, and the potential legal challenges extend far beyond religious concerns.

Instead, Platt suggested religious opponents of the law are more likely to utilize the strategy of Faith in Public Life and its allies: the power of protest.

“Beyond the question of other legal challenges to the law, are progressive faith activists even going to be interested in bringing a religious exemption claim — which really would only apply to people who have a faith motivation for giving out food and water — or might they be more inclined to engage in a campaign of civil disobedience?”

Opinion
Whoever wins in Georgia, democracy already won the midterms
Follow us on Facebook!
Submit your photos to RNS