VATICAN CITY (RNS) — Under a black sky and with torches lighting the square, Pope Francis presided over the Via Crucis, or the Way of the Cross, late on Friday in front of St. Peter’s Basilica, in an event that underlined once more the profound transformation the COVID-19 pandemic has imposed on the Catholic Church and the world.

Roughly 250 people attended the ceremony, wearing masks and socially distancing in the mostly empty St. Peter’s Square. A choir sang Gregorian chants during the ceremony, breaking the eerie silence of the Eternal City, emptied by the recent strict lockdown enacted amid a new surge of coronavirus cases.

RELATED: On Holy Thursday, Pope Francis links preaching the gospel to pain of the cross

“Dear Jesus, you know that we children also have crosses to carry. Crosses that are no lighter or heavier than those of adults, but are still real crosses, crosses that weigh us down even at night,” the reader said, giving start to the procession marked by an emphasis on children and future generations.

“Only you know how hard it is for me to learn not to be afraid of the dark and all alone,” the reader said.

Nuns, priests and laypeople wielded torches in one hand and held the hands of children with the other as they walked around the massive obelisk in the square. With them were members of a Boy Scouts group from a Roman parish in Foligno, in the Central Italian region of Umbria. The boys had drawn pictures depicting Christ’s Passion, which were shown on the event’s broadcast. 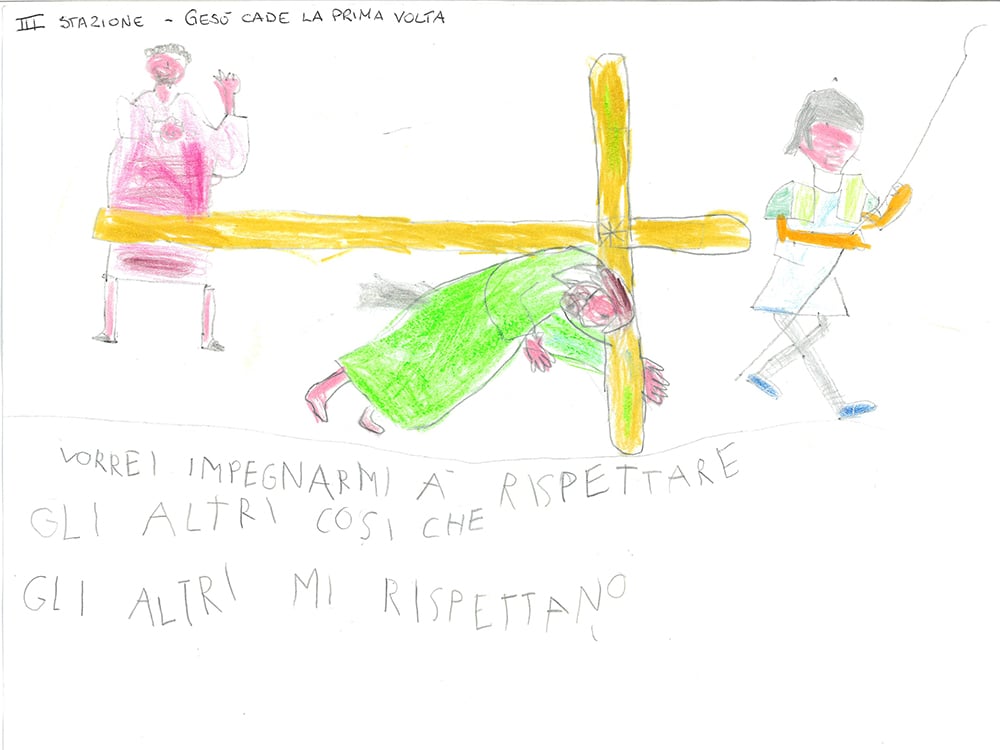 A child’s drawing of the third station of the cross, when Jesus falls for the first time. Courtesy image

The Via Crucis is an event that would normally see the participation of swathes of Roman citizens, Vatican clergy and Catholic pilgrims from all over the world. Before the pandemic forced the church to empty its pews and squares, the pope would lead a procession of hundreds of people around Rome’s famed Colosseum, where it is believed many Christians were martyred.

Pope Francis sat with eyes closed and hands folded in prayer, a white dot over the red rug beneath him. Behind him, a simple cross over a scarlet background stood out as the dominant figure on top of the richly decorated façade of the Basilica.

During the meditation marking the third time Jesus fell under the weight of the cross, children spoke of their pain in being separated from their grandparents, schoolmates and teachers over the past year. “This miserable feeling of loneliness at times becomes unbearable,” the children read. “We feel ‘abandoned’ by everyone, no longer able even to smile. Like Jesus we find ourselves flat on the ground.”

Pope Francis greeted the children who ran to embrace him after a short prayer closing the ceremony. Limping slightly due to the pain of his sciatica problems, the pope returned to the Vatican.