(RNS) — For more than a week, Simeon Momanyi has worked to strike a balance between abiding by law enforcement and ministering to protesters decrying racism and police brutality. It’s a complex task: Kenyan Community Seventh-day Adventist Church, where he serves as pastor, is adjacent to a police precinct in Brooklyn Center, Minnesota, where protests have flared following the death of Daunte Wright, a 20-year-old Black man who was shot and killed by an officer earlier this month.

What’s more, Brooklyn Center, a suburb of Minneapolis, lies ten miles from the spot where Officer Derek Chauvin was filmed killing George Floyd last year, sparking a wave of demonstrations across the country. Despite Chauvin’s conviction by a jury on Tuesday (April 20), authorities in Minneapolis have prepared for potential unrest.

But moments before the verdict was read, Momanyi said no matter their decision, he intends to keep his church — which has been offering food and water to demonstrators — open.

“The church is a safe space where healing and hope happens,” he said in a text message. “Regardless of the verdict, the church will always remain open and will continue serving the community.”

From the 2014 racial justice protests in Ferguson, Missouri, to last summer’s Black Lives Matter actions across the country to demonstrations over the shooting of Wright two weeks ago, churches have served as way stations. Many offer water and shade for those who have come out to express their outrage and shelter from police who have at times surrounded houses of worship when protesters take refuge inside.

Unlike some faith leaders and religious communities that have voiced full-throated support for racial justice demonstrators over the past year, Momanyi explained his church does not “necessarily take sides” regarding the demonstrations and has closed its doors when evening curfews went into effect.

Even houses of worship that don’t take sides have been flashpoints, however. Momanyi’s is one of at least two congregations that has found itself at the center of standoffs between police and racial justice demonstrators over the past week, both in Brooklyn Center. The churches’ involvement with the demonstrations went viral over the weekend when a photo of police officers surrounding Kenyan Community Adventist was shared widely on social media.

The pastor told Religion News Service his congregation has opened its doors to offer a place of respite during daytime demonstrations. Kenyan Community Adventist coordinates with different community-based organizations in the area to allow volunteers to stand outside to offer food and water to protesters.

“If someone wants to pray, or just a place to rest during the day, they can come in,” he said.

Momanyi said that while daytime demonstrations have been peaceful, a different group has often appeared in the evening that frequently engages in direct confrontations with police.

While he doesn’t know the exact circumstances surrounding the image of police surrounding his church, he has a theory.

“My guess is when this photo was taken, the police were preventing the crowd from accessing the church parking lot because then they could have easily broken into the police station since the fencing on the church side is very weak,” he said in an email.

“We oppose police violence against people of color — against anybody,” he said. “We believe in the sanctity of life as a church. We believe and ask for justice and ask for mercy for everyone.”

A similar dynamic unfolded over the weekend at Lutheran Church of the Master, a congregation affiliated with the Lutheran Congregations in Mission for Christ. According to the Rev. Jim Verbout, an associate pastor at the church, LCM’s involvement came when a group of medics asked if they could use the church to administer aid to anyone who was injured.

The church agreed and opened its doors as part of a “hospitality ministry.”

“On Monday (April 12), we had our doors open because it was very cold and a lot of people wanted to use the restrooms,” Verbout said. “It was an easy way to connect with people and pray. We’re Lutherans, so then came the hot chocolate and coffee. Following that was the pastries and food.” 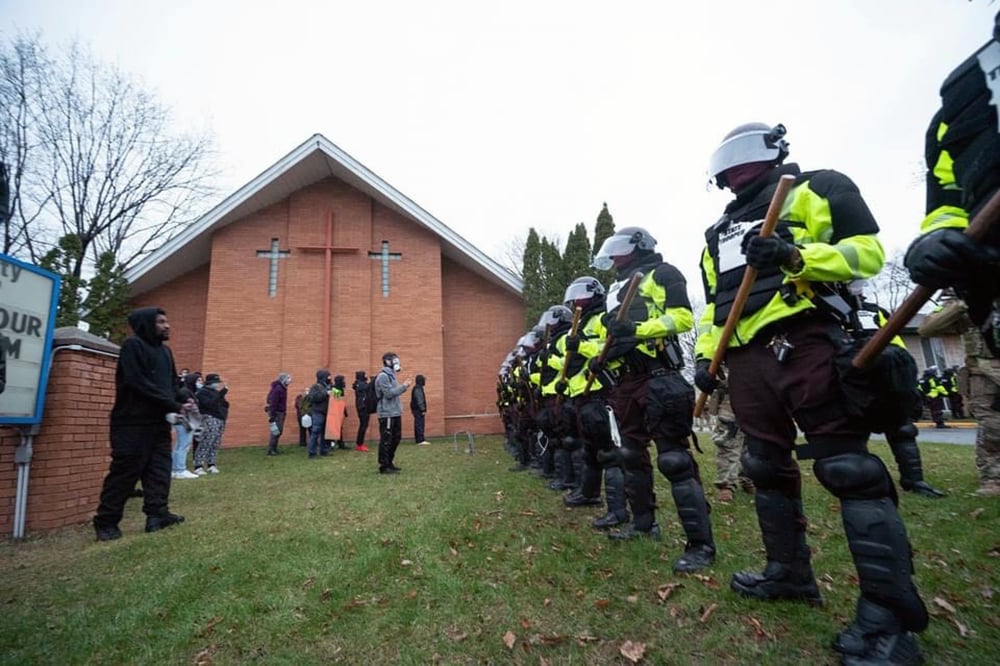 Like the Kenyan Community Seventh-day Adventist Church, Verbout stressed his congregation wasn’t necessarily taking sides. He said the church was open to all — “It was for medics, it was for press, it was for protesters, it was for police” — and that members of all groups made their way through the doors over the course of the week.

“I support Black Lives Matter and I support Blue Lives Matter — that’s blasphemy to so many people,” he said. “And it’s like, ‘No, it’s not — God’s love is for everybody.’”

He referenced Matthew 11 and Luke 18 — passages from the Bible that detail serving the hungry and Jesus listening to a beggar, respectively.

“We became a ministry of listening,” he said.

But the situation changed Wednesday night when demonstrators ran back to the church and police began shining lights at their walls. The sam scenario repeated Friday evening, when dozens of demonstrators suddenly rushed into the church, fleeing police.

The officers followed, and the result was what Verbout described as a standoff between police and protesters in the church parking lot.

“‘I just thought, ‘God, what do you want me to do here?’ Because everyone was asking, ‘Can the police come in here? And I kept saying there is no law saying police cannot come in here,’” he said.

Verbout put on his pastor stole and began trying to calm demonstrators. He then approached police, hoping to deescalate the situation. Eventually, the police left, and the standoff resolved.

Verbout and other pastors at the church huddled afterward and concluded they couldn’t keep up the open-door hospitality ministry during the protests. The clergy worried they didn’t have enough support staff and expressed concerns about inadvertently sending what they saw as misleading messages.

RELATED: The mood in Louisville: Second night of protests ends in police standoff outside church

“We did not want to give protesters the assumption (that) this is a place where police can’t come in and arrest,” he said. “That’s a dangerous precedent to set up, and … we don’t want to be interfering with the work (police) need to be doing as well.”

Other faith communities openly assisted demonstrators during racial justice protests over the past year. In nearby Minneapolis, a Holy Trinity Lutheran Church also opened its doors for demonstrators last year after the killing of George Floyd at the hands of police. But the pastor of Holy Trinity was one of several faith leaders who sided with the cause of demonstrators by signing a letter calling on city officials to arrest the officer “who killed George Floyd and those (officers) who stood by and passively watched a murder.”

Other faith leaders actively participated in demonstrations that took place in Minneapolis or other parts of the country, some of which came in direct conflict with police. Clergy were pepper-sprayed by authorities, and others were struck by nonlethal projectiles fired at them by police. Priests and pastors were even among the racial justice demonstrators who were gassed and forcibly cleared from Washington’s Lafayette Square by federal authorities in June 2020, shortly before then-President Donald Trump walked across the park and held up a Bible in front of a church.

There were also moments that mirrored the situation in Brooklyn Center: In September of last year, police surrounded First Unitarian Church in Louisville, Kentucky, when about 100 protesters sought refuge from police in the church.

Verbout said he isn’t sure what his church’s next steps are, but he noted the police department has reached out to LCM about the possibility of hosting a prayer and reconciliation service for the community. LCM is also fielding a deluge of hate mail, especially from people critical of their willingness to assist the demonstrators.

Despite the stress, Verbout — who just started his job at LCM this month — appreciated the chance to learn.

“I know I have blind spots coming into community with people of color,” he said. “I grew up white middle class, so this is giving me the opportunity to connect with a lot of people in a community that’s hurting.”