(RNS) — Los Angeles pastor Stephen “Cue” Jn-Marie is quick to point out the movement for Black lives and Black Lives Matter has been going on for eight years, but he believes it was “an act of God” that transformed it last year into the largest social movement in U.S. and world history.

“Who can articulate that, but a faith leader?” he added.

For Jn-Marie, who founded the Church Without Walls in Skid Row, the Black Lives Matter movement is valid without faith leaders but, he said, clergy help “people see God’s heart for the movement.”

One year ago, the death of George Floyd under the knee of a police officer galvanized the nation — and eventually much of the world — into months of historic protests against police brutality and systemic racism and in support of Black lives. Clergy were often front and center in these protests and their clarion call not only to politicians but also to religious leaders sparked a racial reckoning within churches, synagogues and mosques. On the anniversary of his death, these leaders reflect on how much has changed — and how much there is still do to.

“George Floyd’s murder brought a renewed urgency to stop the epidemic of anti-Black police violence and deep-rooted injustices in our justice system,” said Madihha Ahussain, senior policy counsel for Muslim Advocates. She pointed to what she described as the historic verdict in the trial of Derek Chauvin, the former Minneapolis police officer, who was found guilty of murdering Floyd when he knelt on Floyd’s neck, as evidence “change is possible.” But, she said, there is still so much more to do.

She noted work Muslim Advocates has been doing on behalf of Muhammad Muhaymin Jr., a disabled Black Muslim who died in police custody in Phoenix in 2017. Recently released video footage reveals an eerie echo of Floyd’s death, as Muhaymin screams “I can’t breathe,” under the knee of a police officer.

“We must fight to ensure the other officers involved in Floyd’s murder are held accountable. We also must fight for Muhaymin, Ronald Greene, Daunte Wright, Adam Toledo, Breonna Taylor and so many other victims of police violence,” Ahussain said.

Often leading the charge have been Black ministers. The Rev. Greg Drumwright of Greensboro, North Carolina, is one.

Four days after Floyd’s death, Drumwright flew to Minneapolis. He befriended Floyd’s relatives and offered them pastoral care. In April of this year, he spent six weeks in Minneapolis escorting family members to the courthouse every day of Chauvin’s trial.

But Floyd’s death was just the beginning. 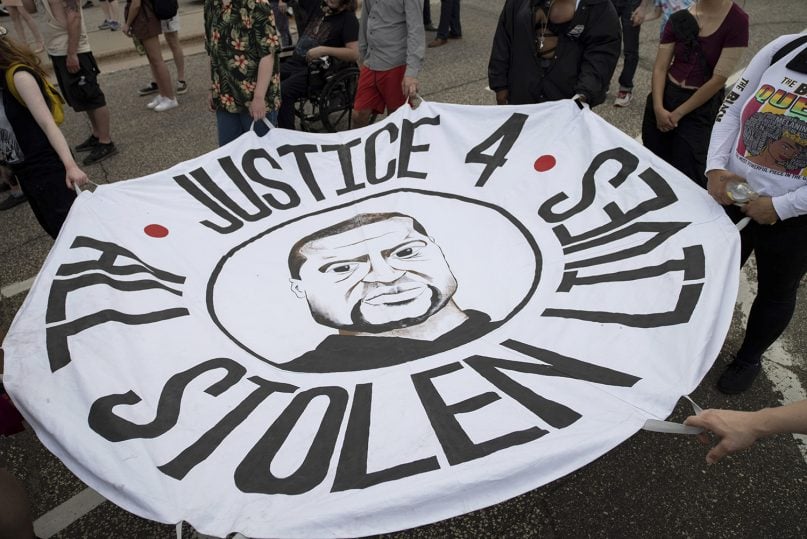 People hold a banner at a rally and march May 24, 2021, in St. Paul, Minnesota, organized by families who were victims of police brutality. The event marked the one-year anniversary of George Floyd’s death. (AP Photo/Christian Monterrosa)

Drumwright swung into action on a host of other racial justice issues this past year — many closer to home. He and members of his newly built grassroots organization, Justice 4 the Next Generation (J4NG, for short), led half a dozen protests for greater racial justice in Alamance County, North Carolina, where the sheriff has employed aggressive policing tactics targeting Blacks and Latinos. More recently, Drumwright has traveled repeatedly to Elizabeth City on the state’s eastern edge, where last month an unarmed Black man was shot to death by sheriff deputies serving a drug-related search warrant.

Drumwright, too, acknowledged he’s seen some progress this past year for which he’s grateful. The Chauvin verdict was one example. He went up to Virginia to watch Gov. Ralph S. Northam sign Breonna’s Law banning no-knock warrants (named after Breonna Taylor, who was shot and killed when three officers used a no-knock warrant to enter her apartment.)

“The consciousness of America has been awoken and that’s why we’re continuing on in this journey, even beyond the anniversary of George Floyd,” Drumwright said. “Has it been enough? Not nearly.”

Howard University Divinity School and Sojourners, a Christian mobilizing and media organization, were already months into a new “Theology and Racialized Policing Cohort Program” when Floyd was killed. About 45 participants found themselves immediately putting into practice what they were learning.

“Several of our folks were speakers at protests and were articulating a theological voice in the midst of this time calling for accountability and transparency and justice,” said the Rev. Terrance McKinley, director of racial justice and mobilizing for Sojourners.

Since the predominantly Black but diverse group of clergy completed the certificate program last summer, they have been acting on lessons they learned: An African Methodist Episcopal Zion pastor is leading his Washington church to partner with a predominantly white Catholic church to focus on reconciliation and strategize to address local issues. A Baptist minister in Washington has developed a conduct code for her community and preaches more regularly about social justice. Participants from Virginia are seeking to create a local civilian oversight board and other means to investigate law enforcement violence.

McKinley said a second pilot program was held this spring in conjunction with Duke Divinity School and featured Black and Latino clergy focusing on immigration and policing issues and resulting trauma faced by communities of color. He hopes the program will next be a national one that supports teams of two senior leaders and two younger “next-generation” pastors or seminarians in cities where there have been high-profile incidents of police violence.

“Change is not going to come unless we work to bring about that change,” McKinley said.

Episcopal Bishop Bonnie Perry of Michigan hopes this moment can “create a movement in the Episcopal Church and beyond.”

Six Episcopal bishops, including Perry, Presiding Bishop Michael Curry, the Rev. Mariann Budde of Washington, D.C., and the Rev. Craig Loya of the Episcopal Church in Minnesota, will lead a “prayerful commemoration” of Floyd’s life on the first anniversary of his death.

The prerecorded service will stream at 8 p.m. Eastern on Tuesday (May 25) on the Facebook pages of the Episcopal Diocese of Indianapolis and other participating dioceses. The service will include a prayer of lament from George Floyd Square in Minneapolis; a candlelight “act of remembrance” from Ferguson, Missouri; and a video marking the 9 minutes and 29 seconds Chauvin knelt with his knee on Floyd’s neck.

“My hope for this service is that we might mark the anniversary of George Floyd’s murder nationally, and then be motivated to act locally, addressing issues of systemic racism in our own unique contexts,” said Perry in a written statement.

In Minneapolis, Holy Trinity Lutheran Church, which opened its doors to offer sanctuary and provide medical support to demonstrators in May 2020, will participate in several events to mark the anniversary, according to the Rev. Ingrid Arneson Rasmussen, including a remembrance event at George Floyd Square and leading an artistic space for “community laments.” 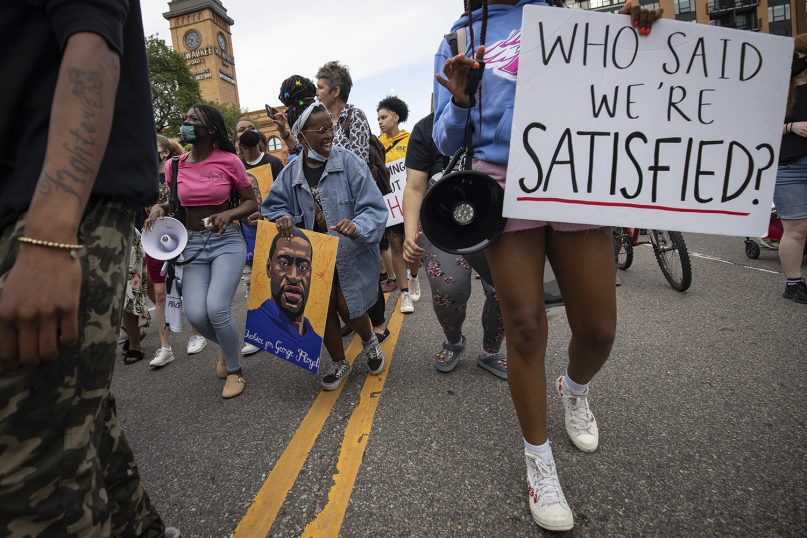 People march May 23, 2021, in Minneapolis for the one-year anniversary of George Floyd’s death. (AP Photo/Christian Monterrosa)

Faith in Public Life, a justice-focused coalition of faith leaders, released a short video of faith leaders remembering Floyd and calling for police accountability, along with a statement from CEO Jennifer Butler calling for “true justice” and advocating for the BREATHE Act, which would redirect tax money from policing to public resources. “People of faith have an important role to play in this moral movement, following the lead of prophetic organizers who have brought about this historic moment,” Butler said.

In the video, the Rev. Jacqui Lewis of Middle Collegiate Church in New York City said justice would be Floyd — and others killed by gun violence, especially by police — still alive. And Rabbi Danya Ruttenberg, scholar in residence at the National Council of Jewish Women, appealed to Scripture, saying, “The verses in Deuteronomy command us not just to issue a verdict when the bar for accountability is on the floor, is in the basement, is deep in the molten core of the earth, but to set up systems of justice, that are just for everybody, all of the time.”

Looking back, LA pastor Jn-Marie said it’s been difficult for many faith leaders to fully embrace Black Lives Matter. Some may not agree with the movement’s support for the LGBTQ community or have a hard time grappling with peaceful demonstrations that have resulted in confrontations with police, Jn-Marie said.

“I think a lot of pastors believe … that in order for them to support (the movement), Black Lives Matter has to behave a certain way,” said Jn-Marie, who has participated in marches that started peacefully but ended with numerous arrests and tense standoffs with police. “It has to adhere to a certain philosophy and they just can’t support Black Lives Matter because Black lives matter, but the movement has to fit within the parameters of ‘respectable Negroes’ or respectable politics and BLM pushes back against that.”

Since Floyd’s death, Southern California religious leaders alongside Black Lives Matter leaders have called on cities to spend less on police and incarceration and more on youth programs and housing. Jn-Marie with Black Lives Matter LA has advocated for the ousting of city leaders like LA County District Attorney Jackie Lacey, over what activists have seen as a mishandling of police brutality cases.

Since then, LA County voters in November approved a measure that will redirect more county funds toward social services and incarceration alternatives. Lacey, who had the backing of police and sheriffs unions, lost her fight for the city’s top prosecutor post to challenger George Gascón, who’s championed Black Lives Matter LA’s criminal justice activism.

“We’ve got to stay in these streets,” Jn-Marie said.