These shifts and findings are among some of the notable revelations documented in a sweeping and exhaustive survey of the U.S. religious landscape by the Public Religion Research Institute.

The 2020 Census of American Religion, released on Thursday (July 8), is based on what researchers called an “unprecedented” dataset that includes hundreds of thousands of respondents surveyed between 2013 and 2019.

Clergy and other faith leaders will be perhaps most interested in PRRI’s finding that religiously unaffiliated Americans, or “nones” in religion demography parlance, have lost ground, making up just 23% of the country. The complex group — which includes atheists, agnostics and some people who say they pray daily but don’t claim a specific faith tradition — peaked at 25.5% of the population in 2018.

White Christians, meanwhile, have expanded their share of the population, particularly white mainline Protestants. That group sits at 16.4%, an increase from 13% in 2016, whereas white evangelicals — who PRRI delineated from white mainliners using a methodology researchers said is commonly utilized by major pollsters — now represent about 14.5% of the population, down from a peak of 23% in 2006. White Catholics now hover around 11.7%, up from a 2018 low of 10.9%. 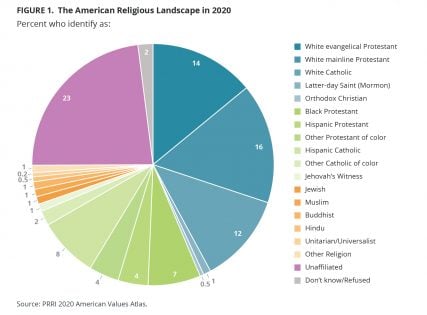 PRRI CEO Robert Jones said in an email that the survey doesn’t provide precise explanations regarding the shift among white Christians. But he pointed to “circumstantial evidence” that suggests “over the last two years in particular, white mainline Protestants seem to have absorbed at least some folks leaving white evangelical and other churches who may have otherwise landed in the religiously unaffiliated camp.”

And the political power of unaffiliated Americans continues to grow. Mainliners represent the same percentage of each political party in 2020 as they did in 2006 — 22% of Republicans, 16% of Democrats. They are also politically split three ways: According to the report, 33% identify as Republican, 35% identify as Democrat, and 30% identify as independent. By contrast, the percentage of unaffiliated Americans has expanded in both parties: They now represent 23% of Democrats (compared with just 9% in 2006) and 13% of Republicans (compared with 4%).

RELATED: What is a mainline Christian, anyway?

Further complicating the political calculus are the ages of each faith community. White evangelicals are now the oldest religious group, with a median age of 56. White mainliners and Black Protestants share the same median age — 50 — with white Catholics skewing closer to evangelicals at 54. 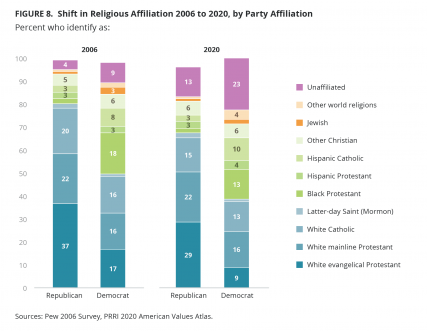 The youngest religious Americans are Muslims, with a median age of just 33. They’re followed by Hindus and Buddhists (both 36), unaffiliated Americans (38), Hispanic Protestants (39) and Hispanic Catholics (42). Jewish Americans (48) and members of The Church of Jesus Christ of Latter-day Saints (47) make up the middle of the pack alongside Jehovah’s Witnesses (49) and Orthodox Christians (42). 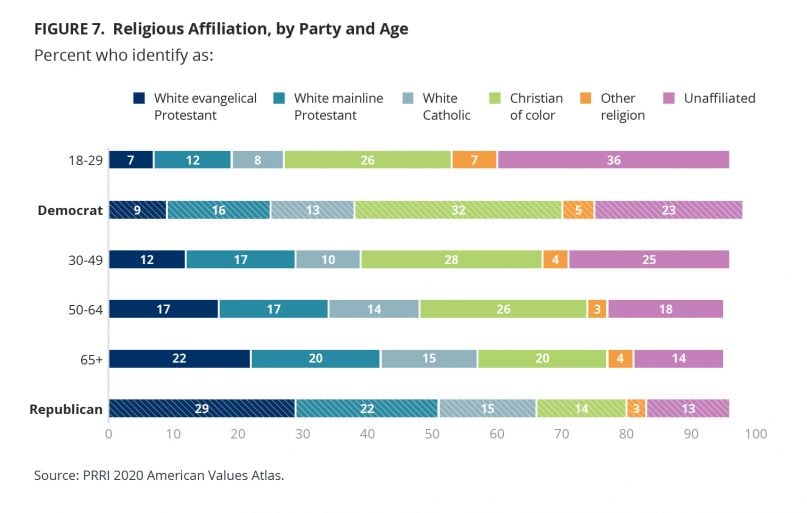 The survey noted that most religious groups have seen their median ages increase, with the exception of Jewish Americans and white mainliners. Jones pointed to the mainline median age — which has actually decreased since 2013, when it was 52 — as more evidence mainline churches may be taking in people disaffiliating from other religious groups, who he said “tend to be younger.”

Meanwhile, Christians of color have increased as a proportion of the population, rising from 23% in 2006 to 26% in 2020. They are also collectively the largest religious group among Democrats (32%), but make up a much smaller percentage of Republicans (14%).

That included a list of the most religiously diverse counties in the U.S.: Brooklyn and Queens in New York took the top two spots, followed by Montgomery County, Maryland, and Navajo County, Arizona. 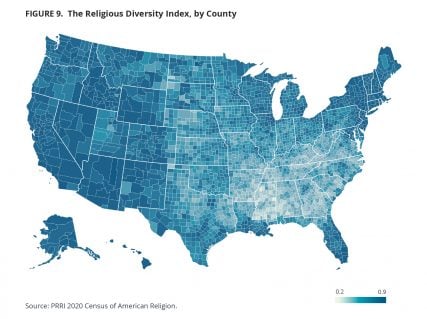 The least religiously diverse counties were mostly in Mississippi — namely, Noxubee and Panola counties — with Conecuh County, Alabama, rounding out the top three.

Hispanic Protestants were most represented in Hidalgo County, Texas (21%), with nearby Zapata County boasting the same for Hispanic Catholics (59%). The highest concentration of other Christians — which includes multiracial Christians, Native American Christians, Black Catholics, and Christians who are Asian American or Pacific Islander — is found in Oglala Lakota County, South Dakota (44%).

Religiously unaffiliated Americans are most concentrated in San Juan County, Washington (49%), and all of the counties with the highest concentration of Latter-day Saints were in Utah, with one exception: Madison County, Idaho (68%), which placed second in that list.