VATICAN CITY (RNS) — This week Pope Francis met none other than Jesus in St. Peter’s Square. While greeting faithful on Wednesday (Aug. 11), the pope spoke with Jonathan Roumie, who portrays Christ in the series “The Chosen” and was visiting Rome to promote the show.

Roumie has often spoken about his journey of “total surrender” to Jesus, a journey that led him from being a broke aspiring actor to the star of “The Chosen,” a series recounting the stories of the Gospels and currently preparing to film its third season, in March 2022.

Roumie had written down a few lines in Spanish to tell the Argentine pontiff in the long-awaited encounter, where he thanked Francis and asked for his prayers as he faces the challenge of interpreting Jesus. The pope’s face lit up when he learned this, Roumie said, and Francis told him “that it’s important that I invite him, that I find him and that it make me very happy.”

“The Chosen” was released in 2019 and became a global success thanks in part to its crowdfunding efforts — the largest ever recorded for a media project. The show has garnered more than 300 million viewers worldwide. Furthering its popularity, the series is readily available for free through “The Chosen” app.

A Catholic, Roumie was able to meet the pope through recommendations written by Bishop Robert Barron, who serves as auxiliary bishop of the Diocese of Los Angeles, and the Rev. James Martin, who is an adviser to the Vatican’s communication department.

This moment, with @Pontifex…. 😭🙌🏽🙏🏽💕🇮🇹 pic.twitter.com/iIRhnGSH2I

Roumie has been in Rome since last week and has visited the city and its historic sites, later accompanied by the creator, director and co-writer of the show, Dallas Jenkins, and Neal Harmon, the CEO of Angel Studios, the show’s distributor.

Rather than being attracted to the monuments, basilicas and artwork of the Eternal City, the cast and creators of “The Chosen” were drawn to its relics, the testaments of the historical reality of Jesus and his disciples.

“Jonathan and I had a reflective moment seeing the tomb of the remains of Philip and James,” Jenkins told RNS, referring to the tombs of the apostles kept in a basilica in Rome. “That was a profound moment for me, just to be reminded that we are portraying real people,” he added.

Roumie was moved by a much larger relic, the 28 marbled steps known as the Scala Sancta or “Holy Stair,” located near Rome’s Archbasilica of St. John Lateran and believed to be the same steps Jesus climbed in Jerusalem to undergo trial before the Roman Praetor Pontius Pilate.

Like countless pilgrims before him, Roumie climbed the steps on his knees while uttering the prayers that tell of Christ’s Passion, from the Last Supper to his resurrection. For the actor, it was “probably the most powerful personal experience in my relationship with Christ that I’ve had since I’ve been here,” he said. His climb took on an added (if metaphorical) spiritual dimension, taking place while Italy endures one of its hottest summers on record, aptly nicknamed “Lucifer” by the local media. “I was drenched at the top,” he said, but added “it was worth every moment.”

RELATED: Is Britney Spears a Catholic? The internet has thoughts

Relics have always been key to the Catholic Church’s ecumenical efforts, serving as a reminder of the common origin of Christian denominations and sometimes even acting as ambassadors for the Vatican on long trips to foreign destinations, such as in 2017, when Pope Francis sent sent the remains of St. Nicholas to Russia to rekindle relations with the Orthodox Church in that country. The pope gifted Patriarch Bartholomew of Constantinople part of the relics of St. Peter in 2019 as a symbol of Christian unity.

Not unlike Christian relics, “The Chosen” has been able to appeal to a wide audience of different faiths and beliefs. “The fact that so many faith traditions love the show is not because we are trying to get so many faith traditions to love the show,” said Jenkins, an evangelical Christian and son of Jerry B. Jenkins, who co-authored the bestselling “Left Behind” series. “It’s because we are focusing solely on Jesus and when you focus on Jesus all those religious walls that people have placed between them come down.”

Part of the global appeal of “The Chosen” is the way the story has been stripped to its essence, leading all Christian denominations to claim the show as their own. The series “really comes from an evangelical perspective, but because (Jenkins) has done such a good job just telling the story of Jesus, I’ve run into people who think this is their show,” said Harmon, a member of The Church of Jesus Christ of Latter-day Saints. 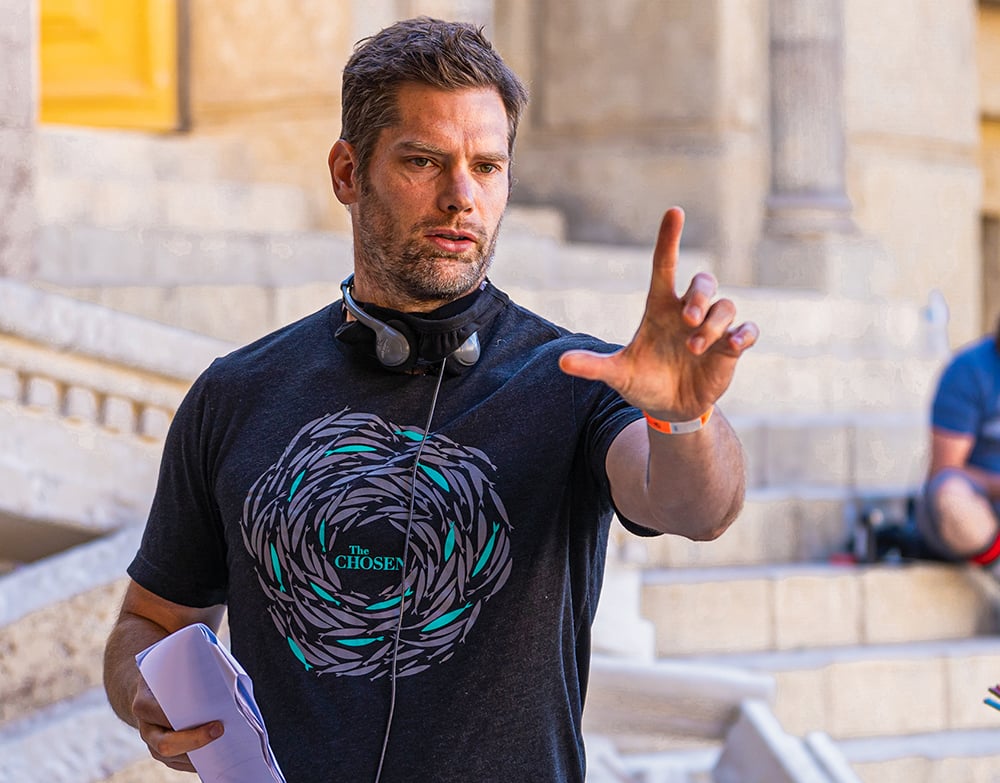 Dallas Jenkins on the set of “The Chosen.” Photo courtesy of Angel Studios

“The Chosen” has a biblical advisory council, made up of representatives of various faith traditions, that will sometimes suggest “a slightly different wording” in order to avoid offending religious sensitivities, but Harmon ultimately credits Jenkins’ creative vision for the show’s success. The camera is handheld, the textures are gritty and the shots don’t shy away from portraying sweat and dirt and dust.

“We start with being authentic and human. That is the goal,” Jenkins said. “We are trying to find the beauty and not create the beauty,” he added, reflecting on the masterpieces by the Catholic sculptor Michelangelo, who viewed his work as simply freeing the artwork from its marble cage.

Despite its efforts to reach wider audiences, “The Chosen” has still had to grapple with the fundamental rifts tearing at the Christian community. YouTube videos show Jenkins hosting roundtables with a Protestant theologian, a Catholic priest and a Jewish rabbi, addressing “the red flags” that might be raised by the show.

“The conversations we’ve had just show how much we agree on when it comes to Jesus and to discuss in a healthy way the things we do disagree about,” Jenkins said. 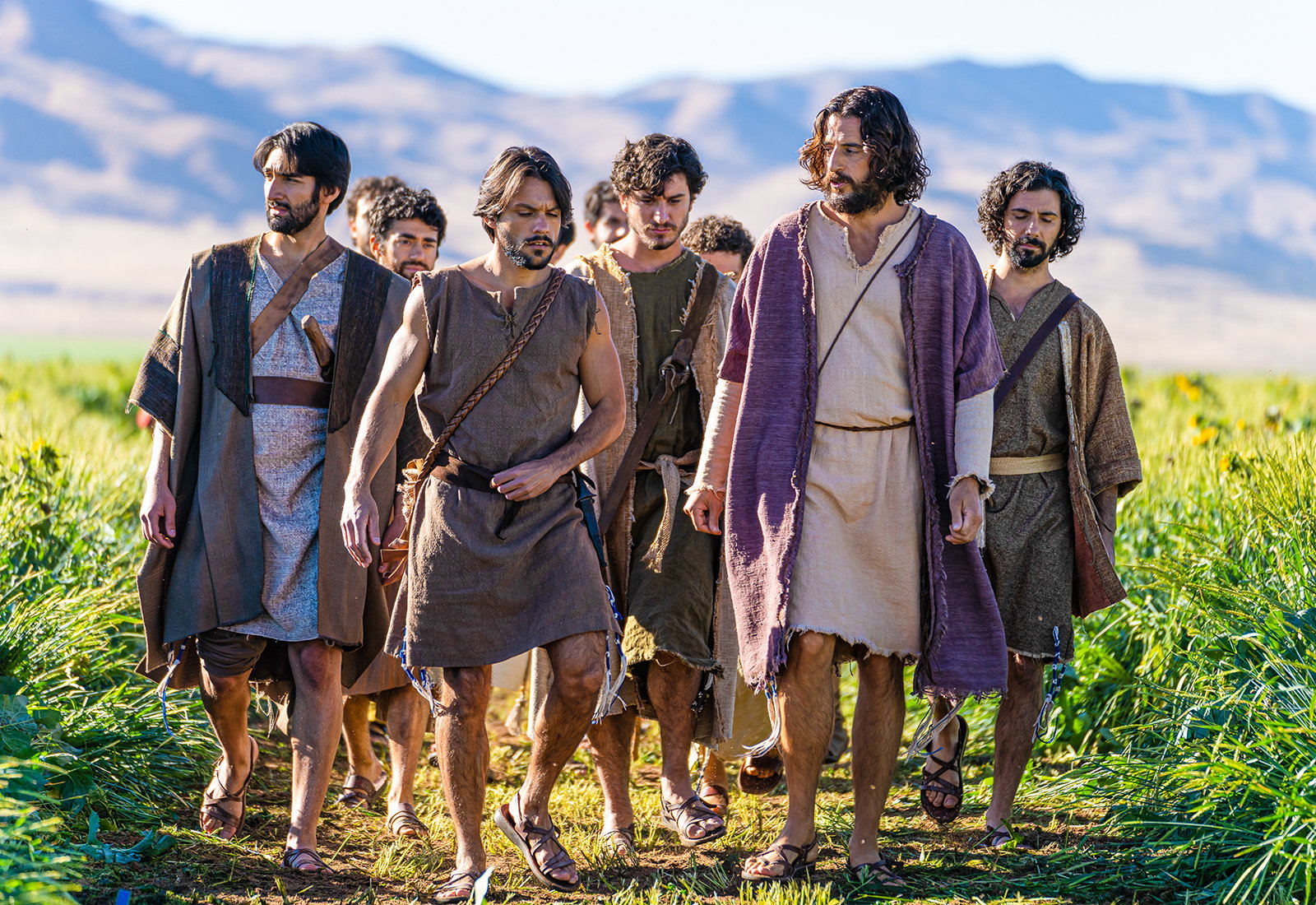 The director hopes Pope Francis will see the show. He said he admires the pope’s ability “to take things from big to small. To make it a personal faith. Something that doesn’t have all the pomp and circumstance.”

“As an evangelical, that really resonates with me,” Jenkins said.

Jenkins recalled that when Francis greeted him on Wednesday, he jokingly asked: “Are you Judas?”

“Protestant and Catholics still have some issues to overcome, still some divide,” Jenkins told RNS, laughing off the exchange. “Give me your best shot!”

ALSO READ: The climate apocalypse is real, and it is coming