(The Conversation) — Tens of millions of Shiite Muslims from around the world will visit Iraq on Sept. 10 this year to see the shrines of Hussain, grandson of Prophet Mohammed, and his brother Abbas on the day of “Ashura.”

This annual pilgrimage marks the 10th day of Muharram, the first month of the Islamic new year. As the Islamic calendar is a lunar one, the day of Ashura changes from year to year.

Muslims visit the shrines to observe the martyrdom day of Hussain, who was killed in the desert of Karbala in today’s Iraq in A.D. 680. Shiite Muslims believe that Hussain was their third imam – a line of 12 divinely appointed spiritual and political successors.

Muharram may be an ancient festival, but as my research tracing the modern-day impact of Islamic pilgrimage shows, its meaning has changed over the centuries. What was once a commemoration of martyrdom today inspires much more, including social justice work around the globe.

The story of Muharram dates back 13 centuries, to events that followed the death of Prophet Mohammed.

After the prophet’s death in A.D. 632, a dispute emerged over who would inherit the leadership of the Muslim community and the title of caliph, or “deputy of God.” A majority of Muslims backed Abu Bakr, a close companion of the prophet, to become the first caliph. A minority wanted the prophet’s cousin and son-in-law, Ali. Those that supported his claim later came to be called Shiite Muslims.

Even if Ali was not made the caliph, Shiite Muslims would consider Ali their first imam – a leader divinely appointed by God. The title of imam would be passed on to his sons and his descendants.

Political leadership largely remained out of the hands of Shiite Imams. They would not be caliphs, but Shiites came to believe that their imam was the true leader to be followed.

By the time Ali’s youngest son, Hussain, came to be the third imam, divisions between the caliph and the imam had further deepened. 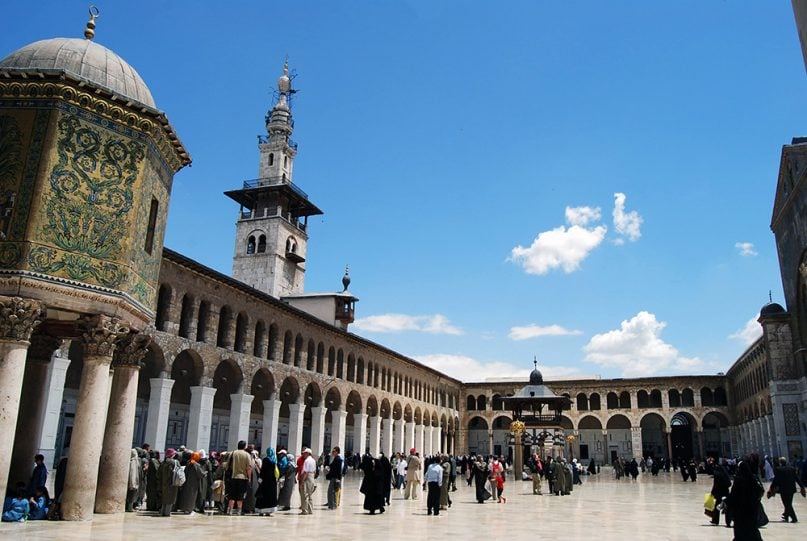 The Umayyad Mosque in Damascus. Photo by Alessandra Kocman/Creative Commons

In A.D. 680, during the holy month of Muharram, a caliph of the Umayyad dynasty, Yazīd, ordered Hussain to pledge allegiance to him and his caliphate – a dynasty that ruled the Islamic world from A.D. 661 to 750.

Hussain refused because he believed Yazīd’s rule to be unjust and illegitimate.

His rejection resulted in a massive 10-day standoff at Karbala, in modern-day Iraq, between Umayyad’s large army and Hussain’s small band, which included his half-brother, wives, children, sisters and closest followers.

The Umayyad army cut off food and water for Hussain and his companions. And on the day of Ashura, Hussain was brutally killed. Among the men, only Hussain’s sick son was spared. Women were unveiled – a violation of their honor as the family members of the prophet – and paraded to Damascus, the seat of Umayyad rule.

This history is reenacted throughout the world on the day of Ashura.

In Iraq, millions of pilgrims fill the streets to visit the shrines, chanting poems of lamentation, and witness a reenactment of violence in Karbala and the capture of the women and children.

From New York and London to Hyderabad and Melbourne, thousands take part in Ashura processions carrying replicas of Hussein’s battle standard and following a white horse. This symbolizes Hussein’s riderless horse returning to the camp after his martyrdom.

Persian passion plays known as “taziyeh,” music dramas of the many martyrs and tragedies of Karbala, are performed across Iran and many other countries. Taziyeh performances are meant to evoke deep emotions of grief in the audience.

A powerful set of themes

Numerous historians and anthropologists have explored how communities across time and space have adapted the story of Karbala or the rituals around Ashūrā.

In the 16th century, a vast majority of the population across Persia, or today’s Iran, would be converted to Shiite Muslims. In this region, the passion plays evolved into a popular form of religious and artistic expression.

The character of Zainab, the Prophet Mohammed’s granddaughter, has also come to play a central role in remembrance of the Karbala story.

Scholars have drawn attention to speeches in which Zainab denounced the violence in Karbala and lauded Hussain’s “martyrdom.”

Today, Zainab is seen as a strong female model of resistance.

In the Iranian Revolution in 1979, the story of Karbala became a rallying point for opponents of the shah, who were fighting against the shah’s brutal and oppressive regime. They compared the shah to the caliph Yazīd and argued that ordinary Iranians had to stand up to an oppressor, just like Hussain had.

Zainab’s resistance to oppression helped emphasize the role of women in Islamic society.

Anthropologist Michael Fischer calls this the “Karbala paradigm” – a story that captures a powerful set of themes, including people standing up to the state and fighting for justice and morality.

Today the story of Karbala has become a powerful tool of fight for social justice in Muslim communities.

“Who is Hussain?,” a social movement with chapters in over 60 cities worldwide, carries out charitable activities and blood donations in the name of Hussain. Volunteers are encouraged to organize around events that will be meaningful in their communities and will tie into social justice issues that Hussain is believed to have fought for.

In 2018, local volunteers donated tens of thousands of bottles of water in Flint, Michigan in remembrance of Hussain and his companions, who were denied water for three days before they were killed.

As historian Yitzhak Nakash points out, the tragedy of Karbala gives Shiite Muslims a common narrative to pass on to the next generations. And commemorating it in multiple ways is an part of their unique identity.

(Noorzehra Zaidi is an assistant professor of history at the University of Maryland, Baltimore County. This article is republished from The Conversation under a Creative Commons license. This post originally ran on Religion News Service in September 2019. The views expressed in this commentary do not necessarily reflect those of Religion News Service.)