COLUMBIA, S.C. (RNS) — The red-brick Georgian-style home on a tree-lined street at the heart of the University of South Carolina campus has no signs out yet. It is as anonymous, for the moment, as the red-brick Dutch townhouse where Anne Frank hid with her family from German soldiers.

Opened Wednesday (Sept. 15), on the eve of Yom Kippur, the Jewish Day of Atonement, the house is North America’s first permanent Anne Frank Center, dedicated to studying the legacy of the German-Dutch writer whose famous diary chronicled the two years she spent hiding in a secret annex in Nazi-occupied Amsterdam.

Frank, who died of typhus fever at the Bergen-Belsen concentration camp at the age of 15, is perhaps the Holocaust’s most beloved symbol. Now she is being memorialized in the heart of the South as part of an educational effort to stem not only hatred of Jews, but bigotry, discrimination and racism more broadly.

Columbia, the capital of South Carolina, is also the birthplace of Dylann Roof, the white supremacist neo-Nazi who in 2015 killed nine members of a historic Black church in Charleston. In 2017 he was sentenced to death.

Beginning this semester, some 100 sections of “University 101,” a required class for all incoming students, will tour the center. Eventually, all first-year students are expected to tour the center, led by peer guides who have been trained to discuss how society should respond to genocidal ideologies such as the one that killed 6 million people because they were Jews. 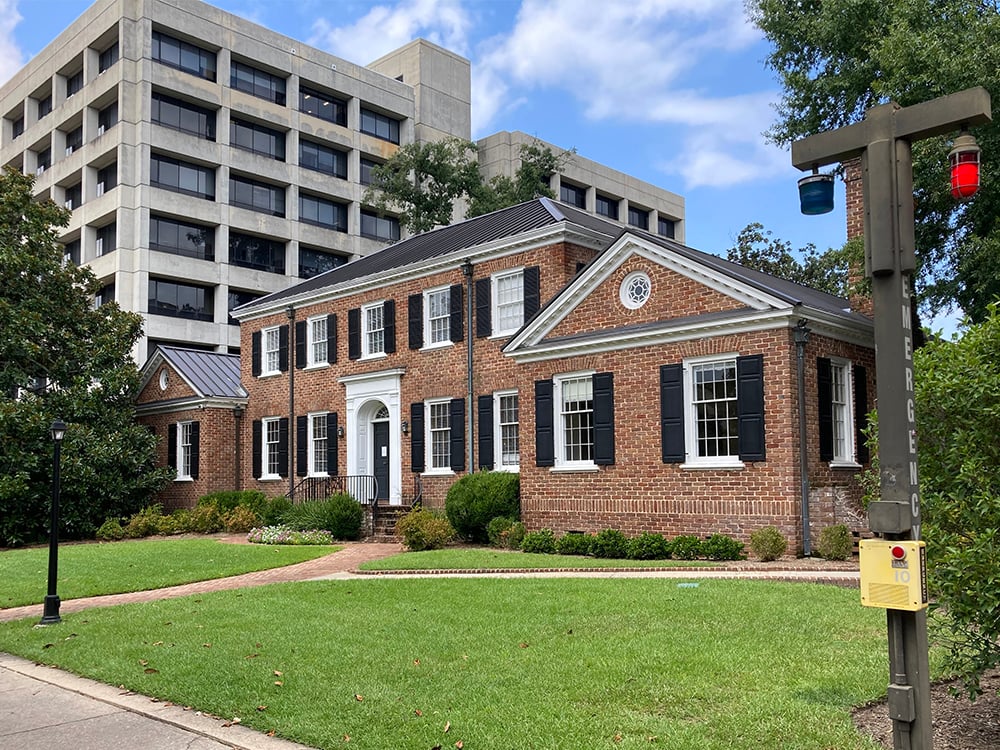 The Anne Frank Center at the University of South Carolina in Columbia is located in the Barringer House. RNS photo by Yonat Shimron

It is this peer-guided learning, developed at the Anne Frank House in Amsterdam, that school officials hope will take Frank’s story far beyond the university campus. They eventually plan to train middle- and high-school teachers to lead guided tours for the general public.

RELATED: I preached the Dickens about antisemitism

The center is the brainchild of Doyle Stevick, associate professor of educational leadership at the University of South Carolina, who is an expert on Holocaust education. Stevick believes peer education has the power to stop hatred in its tracks.

“Young people all know the power of peer pressure as a negative, but few recognize their own capacity to be a positive influence on one another as peer leaders,” said Stevick. “I hope we can help students realize their own potential to bring about one another’s better angels and build a community of upstanders.” 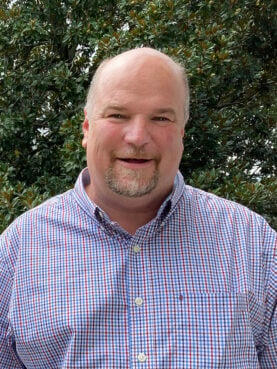 Doyle Stevick is the executive director of the Anne Frank Center and an associate professor of educational leadership at the University of South Carolina. RNS photo by Yonat Shimron

Stevick, who is not Jewish, has been associated with Amsterdam’s Anne Frank House since 2013 and has brought six of its traveling exhibits to South Carolina schools. His interest is not limited to antisemitism, which has increased dramatically in the past few years, in the U.S. and abroad: He is as concerned with the rise of white nationalism and racism against Blacks and how young people might learn about inclusion, pluralism and democracy.

Stevick was a Ph.D. candidate in classics at Indiana University Bloomington and teaching Latin in 1999 when a photo of a student he had just failed six weeks earlier flashed on CNN.

Benjamin Nathaniel Smith was wanted for a crime spree that started with the shooting and wounding of nine Orthodox Jews in the West Rogers Park neighborhood of Chicago and ended with the killing of a Black Northwestern University basketball coach and a Korean graduate student at Indiana University.

Smith, who killed himself after a high-speed chase with police, was a member of the neo-Nazi World Church of the Creator, led by Matt Hale.

“That shook up everything I thought I knew,” said Stevick. “I had an image of a racist as a Klan member or a neo-Nazi with a shaved head. I assumed it was people seething hatred that I could spot a mile away. But I had one right under my head and I didn’t realize it.”

Later, when he co-edited a book on Holocaust education for UNESCO, the United Nations Educational, Scientific and Cultural Organization, he met leaders of the Anne Frank House in Amsterdam and began working with their model for peer education. 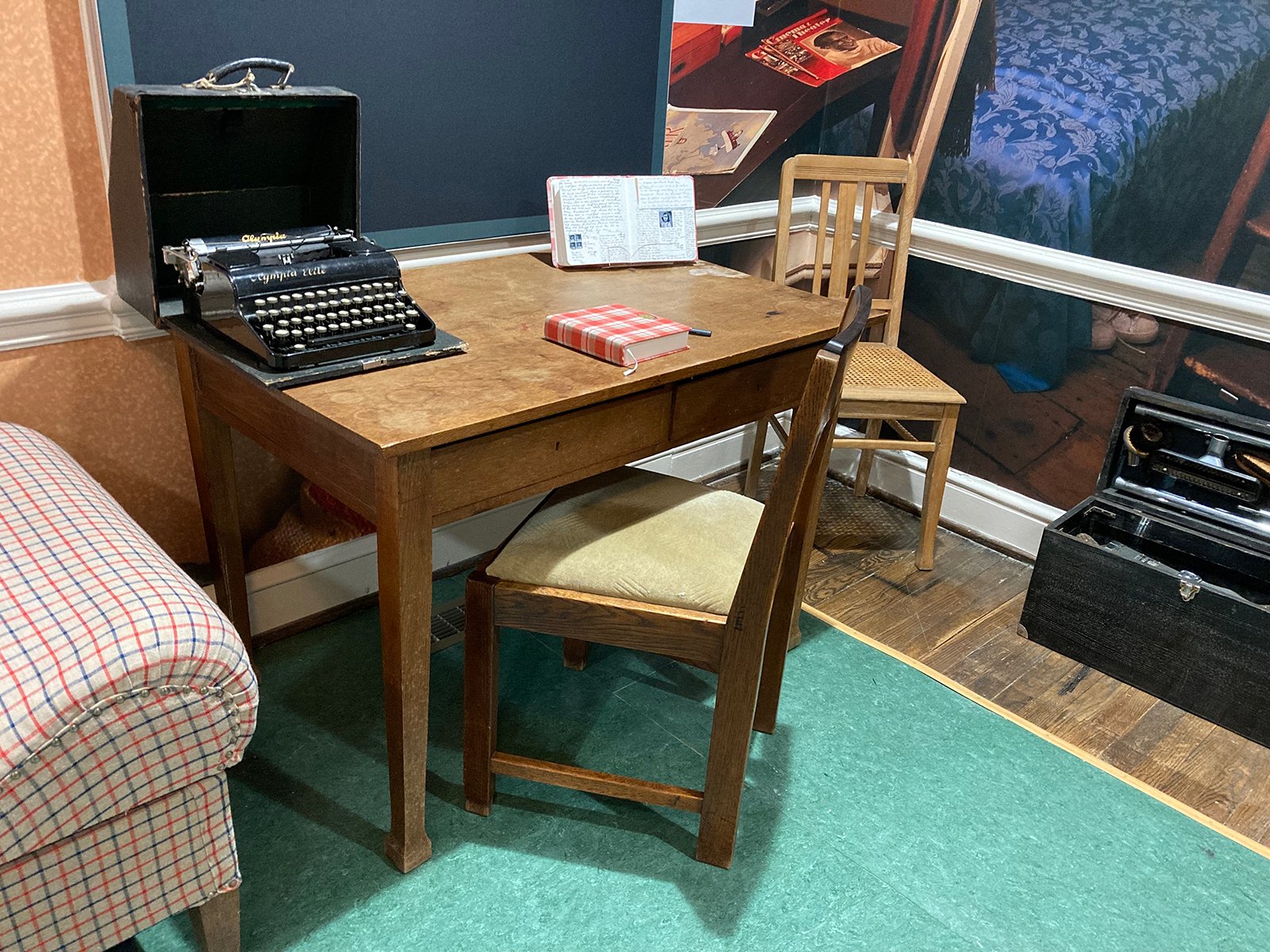 The Anne Frank Center, in Columbia, South Carolina, includes a desk similar to the one that Anne Frank wrote at. She was given a pink checkered diary on her 13th birthday just before the family went into hiding in 1942. RNS photo by Yonat Shimron

The exhibit notes that Anne Frank was born in 1929 — the same year as Martin Luther King Jr., who also lost his life to racist ideology. It features black-and-white photos of Nazi anti-Jewish propaganda alongside a photo of a segregated bus station in Durham, North Carolina, from the same era. The exhibit space closes with artifacts left behind by German prisoners detained in Columbia, South Carolina, during the war.

“The Anne Frank Center lets us focus on issues that are historic and unfortunately very contemporary,” said Rabbi Meir Muller, a professor of early childhood education at the university. “We know that antisemitism is on the rise. We want to give it a voice, and we also want to bring up issues of racism, which is very prominent here in the South. The Anne Frank Center allows a certain convergence.”

Columbia, a city of 133,000, is home to about 3,000 Jews. Many have welcomed the center, which became a reality thanks to the support of former university President Harris Pastides, who agreed to give up part of his office space to make room for the center.

The city now has the distinction of joining Berlin, London and Buenos Aires as the fourth official partner of Amsterdam-based Anne Frank House. The Anne Frank Center, in Columbia, South Carolina, shows a recreation of the bookshelf behind which was a door to the secret annex where Anne Frank and her family hid from 1942 to Aug. 4, 1944, when they were discovered and sent to concentration camps. Anne died of typhus at Bergen-Belsen in 1945. RNS photo by Yonat Shimron

Mary McElveen, a second-year student who is the religious events and cultural programming vice president at Hillel, the Jewish campus organization, and one of about 500 Jews on a campus of 34,000, said she feels comfortable as a Jewish student but is also cautious about sharing her Jewish faith.

“I have met so many people who have lacked in Holocaust education and don’t know who Anne Frank was,” said McElveen.

At a time when American Jews are again on the defensive, the center is a welcome addition, said Rabbi Sruly Epstein, a Chabad rabbi at the university.

“Jewish students don’t need to be satisfied with not being bothered or not experiencing antisemitism,” Epstein said. “They can be public about their Jewish pride, their history and heritage.”

With the opening of the center, funded by the Anne Frank House in Amsterdam, the university and private donations, Stevick hopes it cements the university’s commitment to inclusion and civil society.

“If we can build a community of upstanders and we expect one another to stand up together,” he said, “then we’re responding the way we need to be. That’s something we can help people wrap their minds around.”