(RNS) — A new survey finds white evangelicals are far more likely than most other religious groups to blame left-wing activists for the Jan. 6 insurrection at the U.S. Capitol.

Other white Christian groups are split on the question, which allowed for multiple answers, while Black Protestants are more likely to point to white supremacists and former President Donald Trump.

According to a survey released by the Public Religion Research Institute on Thursday (Sept. 16), small minorities of white evangelical Protestants said Trump (26%) and Republican leaders (16%) bear “a lot” of responsibility for that attack.

Slightly more were willing to point to white supremacist groups (37%) and conservative media platforms that spread conspiracy theories and misinformation (34%) as the cause for the assault.

Meanwhile, white evangelicals were the faith group most willing (57%) to blame “liberal or left-wing activists (e.g. Antifa)” for the attack, referring to left-wing anti-fascist or “antifa” groups. This conspiracy theory was repeated in the days after the attack by evangelical Christian leader the Rev. Franklin Graham and by Trump lawyer Rudy Giuliani but has been refuted by FBI officials and the rioters themselves.

Support for the idea appears to have increased since the conservative American Enterprise Institute conducted a separate poll in February, which found that 49% of white evangelical Protestants believed the antifa claim was completely or mostly true.

In the PRRI poll, very few evangelicals blamed white Christian conservative groups (8%) for the attack, despite the preponderance of Christian imagery and religious expression visible during the insurrection.

Their views most closely resembled that of Republicans overall. A majority (61%) blame liberal or left-wing activists for the attack, whereas minorities of the group blame white supremacist groups (30%), conservative media platforms that spread conspiracy theories and misinformation (27%), Trump himself (15%), Republican leaders (9%) or white conservative Christian groups (8%). 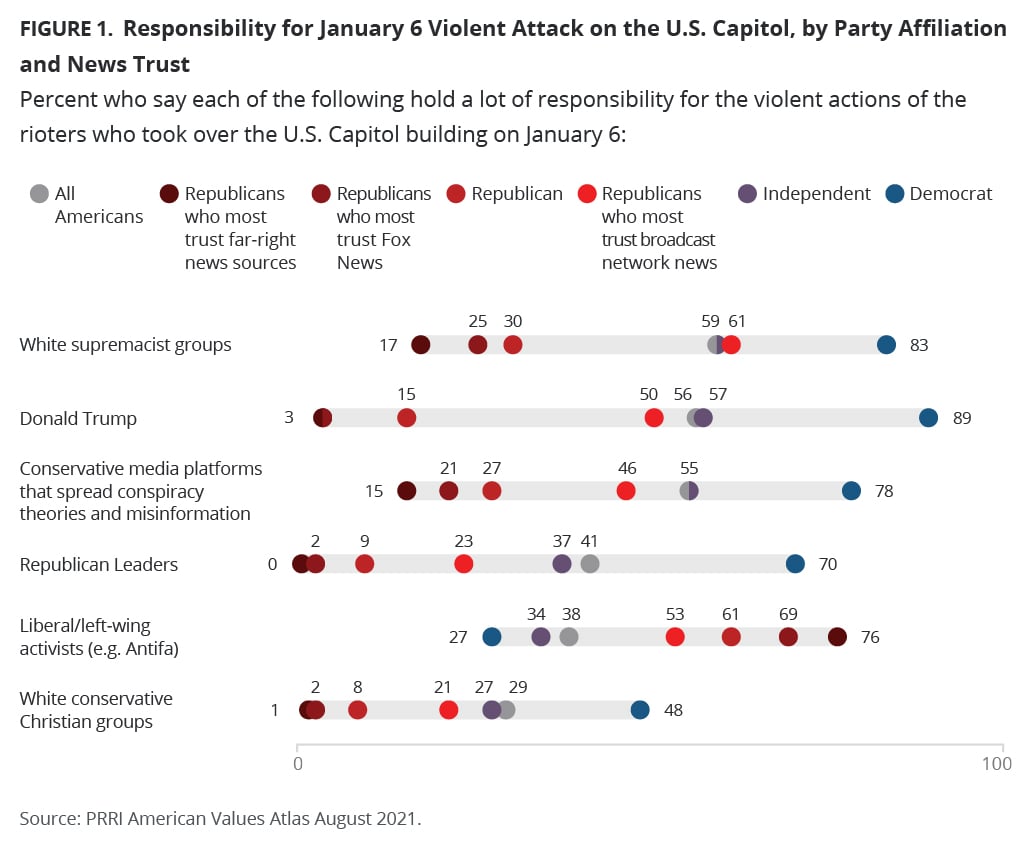 “Reponsibility for January 6 Violent Attack on the U.S. Capitol, by Party Affiliation and News Trust” Graphic courtesy of PRRI

The results were roughly reversed among Democrats, 89% of whom blamed Trump.

White nonevangelical Protestants, who are also categorized as mainline Protestants, were more split on the question of who was responsible for the insurrection. Roughly half (49%) blamed white supremacist groups, with slightly less pointing to conservative media platforms that spread conspiracy theories and misinformation (45%), liberal or left-wing activists (44%) and Donald Trump (43%).

White Catholics were similarly divided, with a slight majority saying the cause was white supremacist groups (54%) and conservative media platforms that spread conspiracy theories and misinformation (54%). Exactly half (50%) cast blame on Trump, and 44% listed liberal or left-wing activists as culpable.

The responses differed sharply from that of Black Protestants, a full 80% of whom blamed white supremacists for the insurrection. So too did majorities of Hispanic Catholics (73%), Hispanic Protestants (59%), Jewish Americans (69%), religiously unaffiliated Americans (65%) and members of The Church of Jesus Christ of Latter-day Saints (56%). 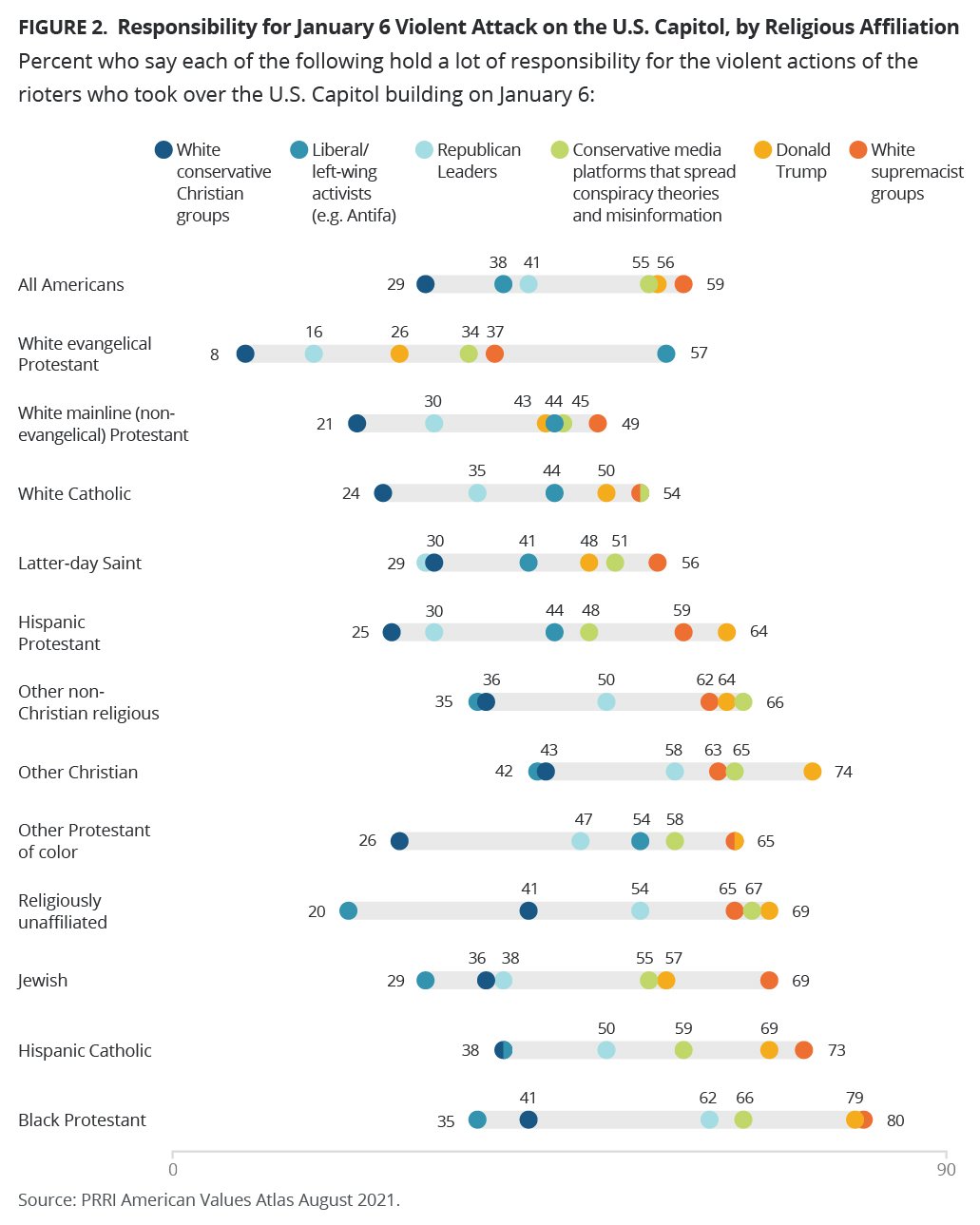 “Responsibility for January 6 Violent Attack on the U.S. Capitol, by Religious Affiliation” Graphic courtesy of PRRI

The only religious category to resemble the white evangelical tendency to accuse liberal or left-wing groups for instigating the insurrection were other Protestants of color (54%), but that group was even more likely to blame Trump and white supremacist groups (65%).