WASHINGTON (RNS) — A new book by former President Donald Trump Chief of Staff Mark Meadows offers a detailed account of the then-commander in chief’s infamous Bible photo-op at St. John’s Church in June 2020, during the height of the summer’s racial justice protests sparked by the murder of George Floyd under the knee of a Minneapolis police officer.

Meadows said it was Trump’s daughter, Ivanka, who came up with the idea to “send a message to people of faith.”

But the book chapter essentially avoids mention of religious outcry at the stunt, nor does it note the forced removal of a priest and a seminarian from the patio of the church during the clearing of racial justice demonstrators from Lafayette Square outside the White House, which occurred right before the event.

Meadows, a onetime North Carolina congressman who describes himself as a committed Christian, details the lead-up to the photo-op in his new book “The Chief’s Chief,” published on Tuesday (Dec 7). Meadows notes his concern upon observing the growing crowd of demonstrators outside the White House in late May 2020, writing he “noticed that the crowds were getting a little too close to (St. John’s Church) for my liking.”

“I knew that these protesters had done massive amounts of damage to buildings over the past few nights, and I shuddered at the thought of the same thing happening to a sacred place like St. John’s,” he writes. “In the Oval Office, President Trump expressed similar concerns.”

The church was, in fact, damaged roughly 48 hours later on the evening of May 31, when a window was smashed and a fire was set in the basement nursery of the historic Episcopal church. St. John’s is often referred to as the “church of the presidents” because of its close proximity to the White House and because every president since James Madison has attended a service there.

The Right Rev. Mariann Budde, bishop of the Episcopal Diocese of Washington that oversees the church, expressed dismay at the destruction of property at the time, telling The Washington Post, “obviously we wanted the church to be a place of haven and safety.”

But Budde did not condemn the larger goal of the racial justice protests, noting she had been outside the church earlier in the day to participate in the demonstrations, standing alongside those handing out water to protesters.

“It’s a building. No one’s life is gone, but we have work to do and we’ll do it,” she told the Post. “Cleaning up, rebuild and focus on the rebuilding of our country which is more important.”

Meadows, however, framed the church burning in his book as an inevitable consequence of the protests. Tear gas floats in the air June 1, 2020, as police move demonstrators away from St. John’s Church, across Lafayette Park from the White House in Washington, as they protest the death of George Floyd. (AP Photo/Alex Brandon)

“It didn’t surprise me that of all the historic buildings standing around Lafayette Square, these rioters would go after a sacred house of worship,” Meadows writes. “It all seemed terribly on brand for them.”

After news of the fire got out, Meadows said, he and other prominent Republicans were inundated with calls from outraged conservatives across the country.

“To them, the sight of a church being burned in the United States of America — just a few hundred yards from the White House, no less — was simply too much to take,” he writes.

Ivanka Trump also received calls about the fire, according to Meadows. In response, she hatched a plan: She suggested the president “give his address in the Rose Garden as planned, and then lead a group of his closest aides and advisors over to St. John’s Church, where he would deliver a short message to the American people.”

Ivanka’s goal, Meadows said, was to signal that “law and order would prevail” and “send a message to people of faith.”

“As I watched President Trump listening to his daughter, I could tell he loved the idea,” Meadows writes.

Meadows also writes that Trump’s aides scrambled to find a Bible for the president to use on June 1, pulling ones from their offices and stacking them on a desk outside the Oval Office. Trump, he says, ultimately chose one of the Bibles less because of its appearance and more for “the way it felt in his hands.”

Later that day, Trump gave a speech in the Rose Garden denouncing mob violence and the burning of St. John’s, saying the nation needs “security, not anarchy.”

The president then began his walk across Lafayette Square, over which, Meadows said, “wisps” of smoke still lingered from the “smoke bombs” used by law enforcement to clear the crowd, “more as a diversionary tactic than anything else.”

A U.S. Department of the Interior’s inspector general report revealed in June 2021 that in addition to clubs, riot shields, smoke canisters and pepper spray used that day by federal law enforcement to expel people from the park, local police also tossed tear gas canisters at demonstrators as they fled.

Meadows’ book does not mention the clergy who were among those cleared from the park by law enforcement or that an Episcopal priest and seminarian were expelled from the patio of St. John’s. The faith leaders were working at the church at the behest of their bishop, Budde, and had been handing out water to demonstrators.

“They turned holy ground into a battleground,” the priest, the Rev. Gini Gerbasi, told Religion News Service at the time.

“I was never prouder to be serving under President Trump than I was walking with him across Pennsylvania Avenue to declare once and for all that in the United States of America, we would not stand for the degradation of our heritage or the burning of churches,” Meadows says in the book. 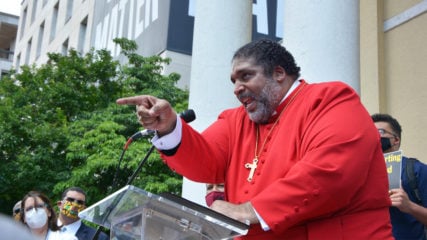 The former congressman writes that Ivanka kept the Bible in her purse until the group arrived at St. John’s. They had expected to enter the church, inspect the damage and possibly say a prayer, but opted for an outside photo shoot upon realizing the sanctuary was boarded up.

As Trump posed for cameras, Meadows says he turned to stare at the church.

“I found it disturbing that of all the things that could have been attacked, these rioters chose a house of worship,” he writes. “I prayed, once again, that we would finally see an end to the violence and chaos.”

Around the same time, Gerbasi and other demonstrators huddled a few blocks away, coughing and passing around eyewash to relieve the effects of smoke and other irritants.

The book does not linger on the reaction to the Bible photo-op, aside from mentioning later that it garnered negative press. Although lauded by several of Trump’s evangelical faith advisers, it evoked fierce criticism in other religious circles — especially among leaders of the Episcopal Church.

“The symbolism of (Trump) holding a Bible … as a prop and standing in front of our church as a backdrop when everything that he has said is antithetical to the teachings of our traditions and what we stand for as a church — I was horrified,” Budde told RNS at the time.