This article is the fourth in a series on Christian nationalism supported by the Pulitzer Center.

(RNS) — Shannon Rivers believes that Indigenous people are the moral compass of the United States.

A member of the Native American Akimel O’otham, or River People of the Southwestern U.S., Rivers points to historical accounts of the northeastern Wampanoag, who in the 1600s taught the Pilgrims how to grow crops and weather harsh winters.

“We were the ones who had that initial moral understanding of how you take care of one another and we still maintain that today, despite every wrong that has been done,” said Rivers, who is a spiritual counselor for incarcerated Native Americans. “Indigenous peoples still gather. They still pray for those who are settler societies.”

Rivers said the history of Christian nationalism began when the European settlers answered the Native Americans’ welcome with a belief that divine providence had ordained their domination of Indigenous land. Shannon Rivers, a member of the Native American Akimel O’otham, said any conversation about America as a Christian nation begins with the philosophical eradication of Native Americans’ right to their homes. Rivers poses for a photo Oct. 17, 2021, in Malibu, California. RNS photo by Alejandra Molina

Rivers said that to confront Christian nationalism honestly, churches and other houses of worship need to focus on a papal bull issued by Pope Alexander VI in 1493 known as the Doctrine of Discovery. Though it gave theological justification for colonization as the Americas were occupied by European powers, Alexander’s bull threaded its way into United States law, providing the basis for a key 1823 Supreme Court decision awarding the American West to the U.S.

Any conversation about America as a Christian nation, Rivers argued, begins with the philosophical eradication of Native Americans’ right to their homes. “We must be part of the larger conversation because you can’t just have talks about religion and spiritual beliefs without understanding the people that were here first,” Rivers said. “You’re just ignoring a long history of the wrongs that these Christians, unfortunately, committed.”

Rabbi Neil Comess-Daniels of Beth Shir Shalom, a Reform synagogue in Santa Monica, California, said the roots of Christian nationalism go back further, to the Christian belief that Jesus was the fulfillment of Jewish prophecy and made Judaism obsolete.

“Christianity came along and it assumed that it superseded Judaism and the Jewish covenant,” said Comess-Daniels, who also works as a rabbi-in-residence at a Lutheran church. (Comess-Daniels made national headlines in 2018 when he delivered a Rosh Hashana sermon denouncing Stephen Miller, a former congregant who was serving as an adviser to then-President Donald Trump, for Miller’s role in the family separation crisis at the border.)

Jewish Americans, said Comess-Daniels, experience Christian nationalism through this antisemitic lens. In the United States, “there seems to be a Christian default,” he said. 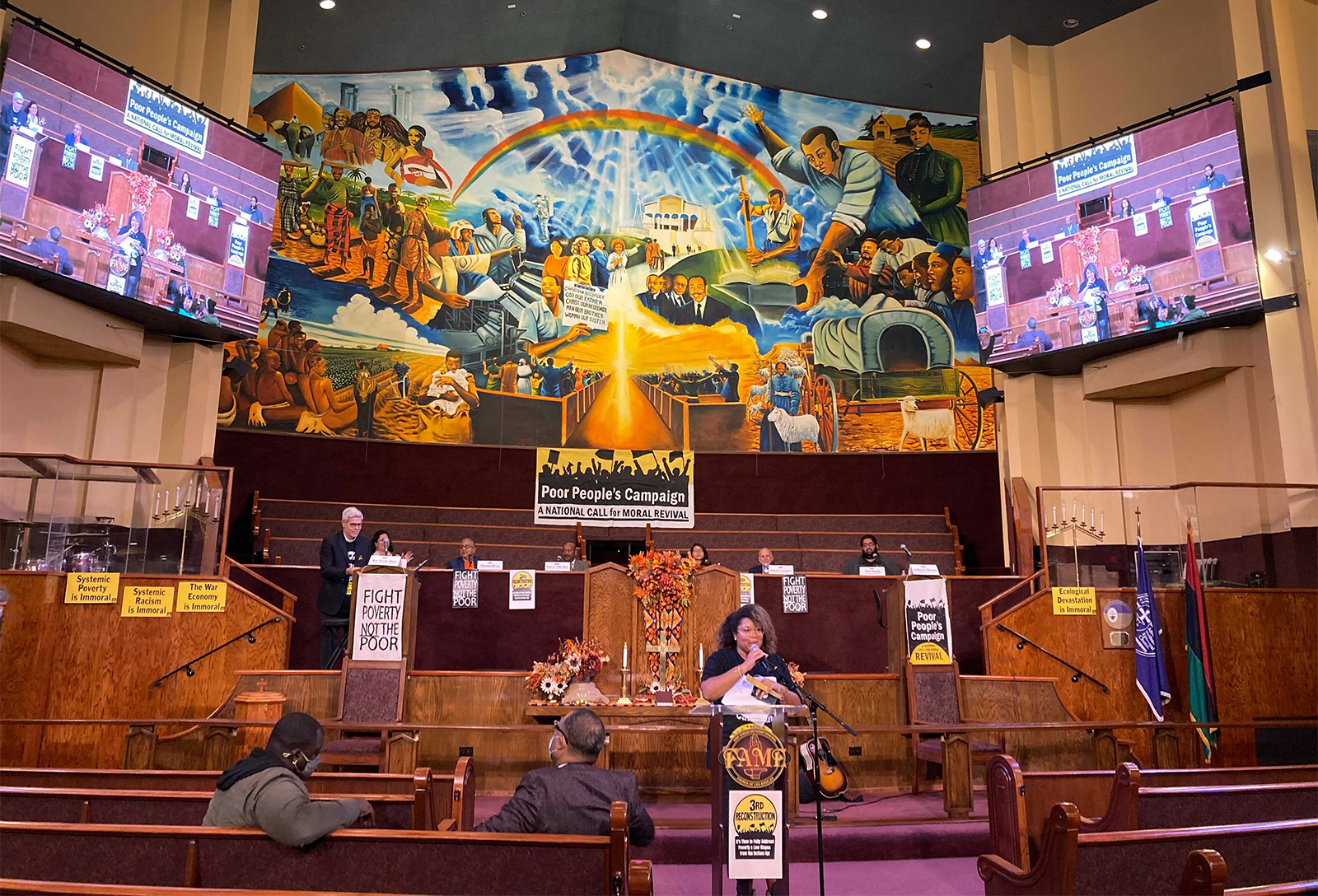 Comess-Daniels and Rivers were among several faith leaders who spoke at a November panel discussion on Christian nationalism sponsored by the California Poor People’s Campaign and held at First African Methodist Episcopal Church in Los Angeles. Another speaker, the Rev. Liz Theoharis, co-founder of the Poor People’s Campaign, said Christian nationalism is so wedded to American ideals that its influence “goes beyond those who identify with its ideology, even those who consider themselves religious.”

There are parallels between the two, Sharma said, pointing to how Hindu nationalists see his opposition to India’s caste system, despite being of a higher caste himself. It’s “a spit in the face,” he said. While nationalists would say he is disrespecting his ancestors by disavowing caste, “I in no conscience of my own can accept the fact that that should be a part of a faith tradition.”

In certain Hindu communities, “if you are critical of rituals or the caste system, you are assumed to be Hinduphobic.”

Christian nationalism, Sharma said, similarly plays on Americans’ emotions by stoking a “falsified idea of patriotism.” Hindus in India and Christians in the United States want to consider themselves as exceptional. “You’re just talking about a different majority context.”

Sharma, regional coordinator for North America at the United Religions Initiative, said white Christians need to work with other faith groups to fight religious nationalism. “Christian people have to do a better job in … being accomplices to folks in the work of social and racial justice,” he said. 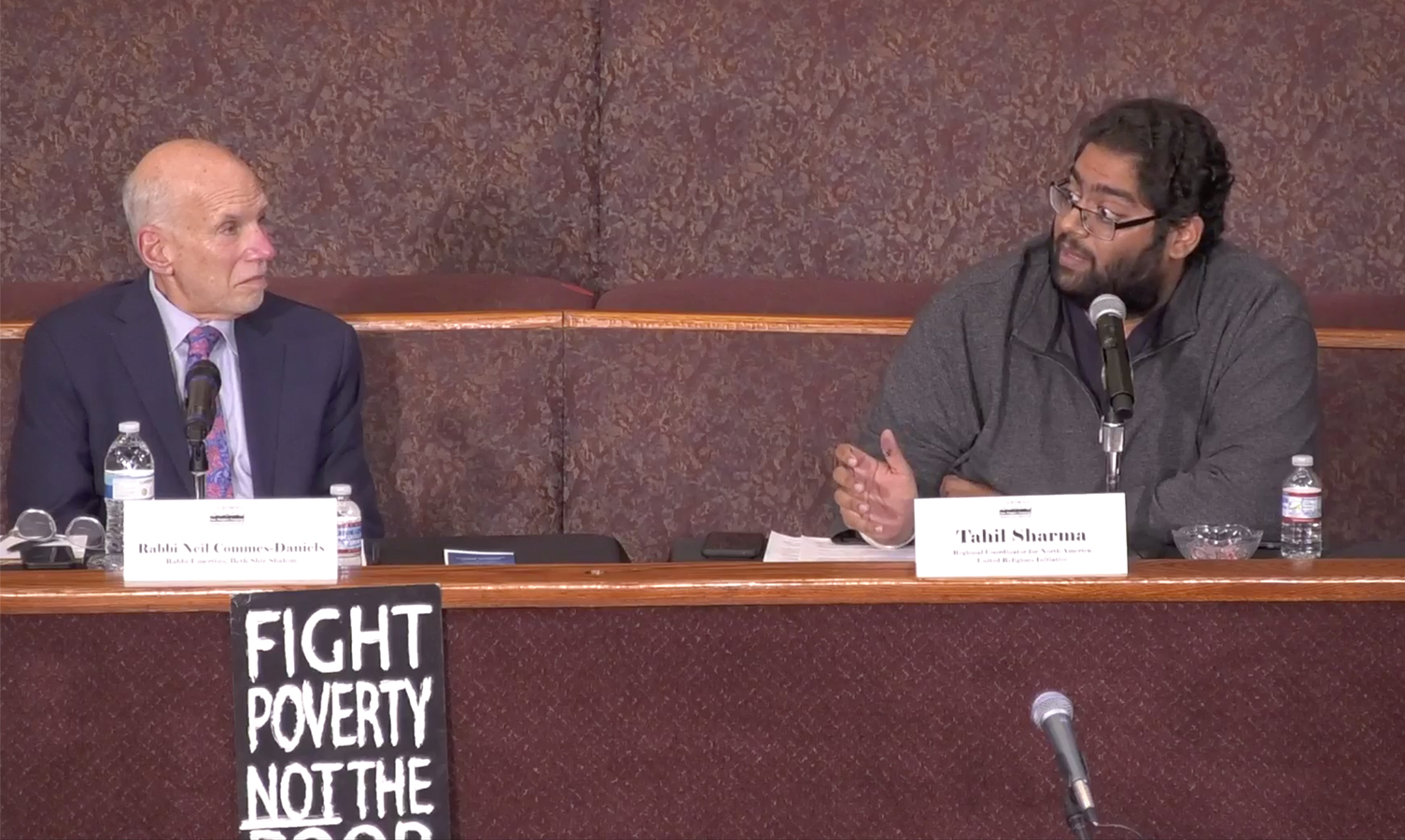 Comess-Daniels agreed that it’s crucial for different religious groups to defend one another but said they need to go beyond simply denouncing Christian nationalism.

He recalled how, during an outbreak of antisemitism in 1993 in Billings, Montana, the townspeople united after a brick went through the bedroom window of a Jewish boy who displayed a menorah for Hanukkah. Thousands of residents placed paper menorahs in their windows as an act of solidarity.

In 2017, after Jewish cemeteries were desecrated in St. Louis, Muslim activist Linda Sarsour and Tarek El-Messidi, the founding director of CelebrateMercy, helped fundraise thousands of dollars to repair vandalized headstones.

“Those kind of responses are real pure. That’s the potential of America,” Comess-Daniels said.

“We all need to stand up together,” the rabbi said. “It’s much more powerful and much more effective in this country in particular because deep down, I think that most Americans understand that we are a pluralistic society and we’re all supposed to be here.”

For Tasneem Farah Noor, an interfaith minister-in-residence with the Southern California Episcopal Diocese, Christian nationalism is “embedded in so many different aspects of everyday society.”

Noor, who came to the U.S. from Pakistan with her family as a 15-year-old, said she’s learned how to take ownership of her Muslim identity after the Sept. 11 attacks. It was a moment for her to advocate for a Muslim identity that was antithetical to terrorism, bombing and taking of lives. “I wouldn’t be Muslim if that’s what it meant,” she said.

When she saw the Christian symbols at the Jan. 6 insurrection, Noor said, those actions brought Americans face-to-face with the fact that “This is America. It’s our nation,” she said. “It was very much like, ‘OK. I’m American and Americans look like this.”

READ THE FULL SERIES: Christian nationalism after the Jan. 6 attack