VATICAN CITY (RNS) — Emeritus Pope Benedict XVI took a penitential approach in his response on Tuesday (Feb. 8) to a report on clergy sexual abuse in the Archdiocese of Munich, which he led from 1977 to 1982.

While denying accusations that he covered up cases of abuse, he leaned heavily on the language of confession, saying he could rely on the consolation of God’s forgiveness, only “if I sincerely allow myself to be examined by him, and am really prepared to change.”

The lengthy report commissioned by the Archdiocese of Munich and Freising, published on Jan. 10, found that bishops who oversaw the diocese, including then-Cardinal Josef Ratzinger, failed to punish abusive clergy and lay people. The report showed that 497 people were victims of abuse in the large German diocese between 1945 and 2019.

In question is whether Benedict’s more fulsome regrets in today’s message will quell criticism for what some said was his overly legalistic response that was published with the Munich report. The Rev. Hans Zollner, regarded as one of the Vatican’s top experts on child protection and abuse prevention, told Religion News Service that Benedict’s response lacked “empathy and humanity.”

In that Jan. 10 statement, Benedict claimed he was not present during a meeting on Jan. 15, 1980, where the case of an abuser priest was discussed.

The emeritus pope immediately retracted that statement through a message sent via his personal secretary, Archbishop George Gänswein, and in today’s response, Benedict said legal experts were responsible for drafting it. Amid the vast amount of paperwork, “an oversight occurred,” Benedict wrote on Tuesday. “This error, which regrettably was verified, was not intentionally willed and I hope may be excused,” he wrote.

Benedict said that the criticism after the release of the report had wounded him. “To me it proved deeply hurtful that this oversight was used to cast doubt on my truthfulness, and even to label me a liar,” he wrote.

The retired pontiff said he found consolation in the numerous demonstrations of support that he received from friends and collaborators. “I am particularly grateful for the confidence, support and prayer that Pope Francis personally expressed to me,” he wrote. 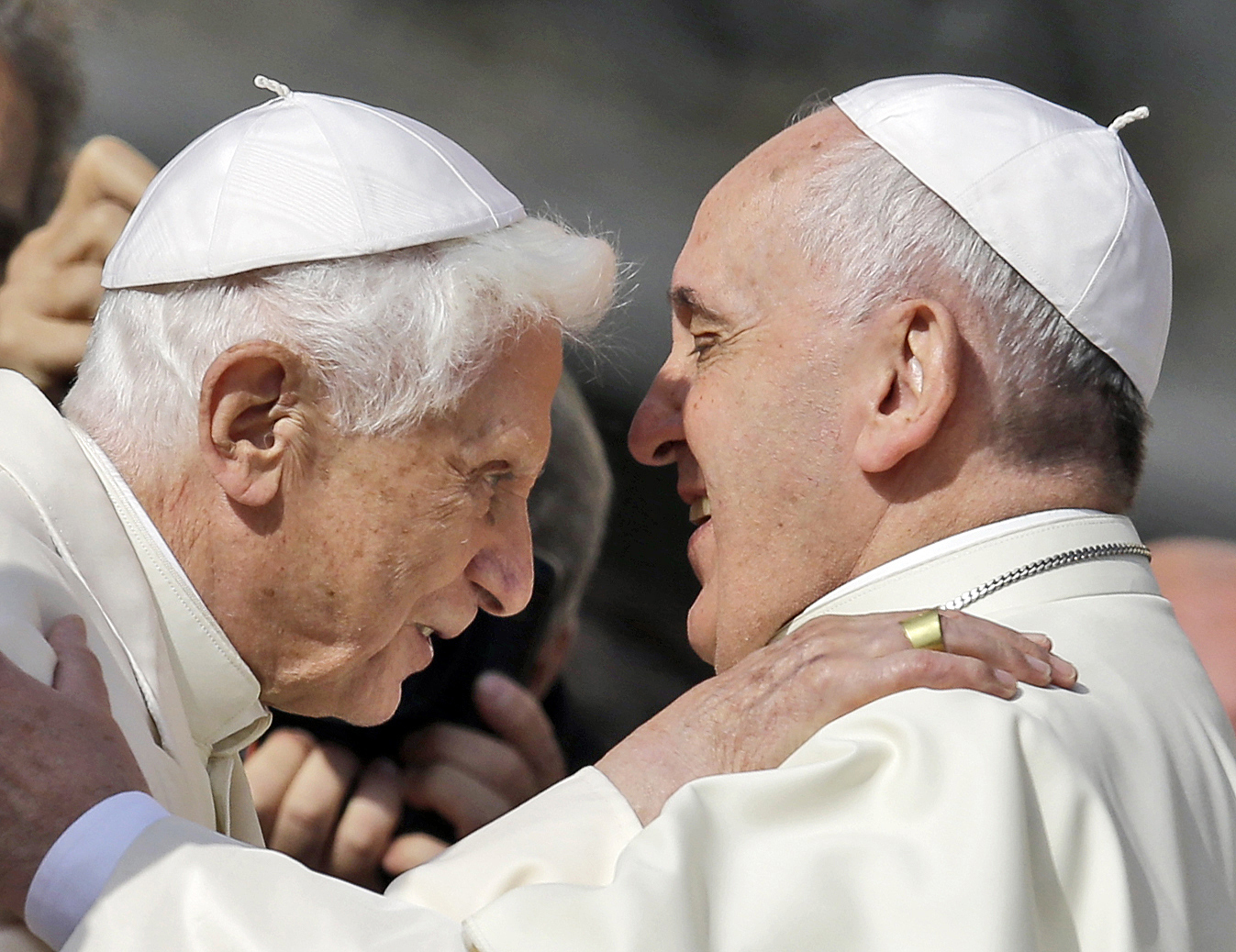 FILE – Pope Francis, right, hugs Pope Emeritus Benedict XVI prior to the start of a meeting with elderly faithful in St. Peter’s Square at the Vatican, Sunday, Sept. 28, 2014. A long-awaited report on sexual abuse in Germany’s Munich diocese on Thursday faulted retired Pope Benedict XVI’s handling of four cases when he was archbishop in the 1970s and 1980s. (AP Photo/Gregorio Borgia, File)

An editorial in the Vatican newspaper published Jan. 26 defended Benedict and his actions and laid out his track record in combating abuse as bishop, head of the Vatican’s doctrine watchdog agency and as pope. Pointing out that as Benedict XVI he became the first pontiff to meet with victims of sexual abuse by clergy, the paper advised against seeking “easy scapegoats and summary judgments.”

In his interview, Zollner also lamented how, when it comes to abuse, Catholic clergy often forget the value of the sacrament of confession, which requires the penitent to acknowledge the mistakes that were made, confess them with honest repentance and seek reparation.

In his Tuesday statement, Benedict seemed to have picked up this thread. He expressed “my profound shame, my deep sorrow and my heartfelt request for forgiveness.” He especially voiced his pain for those who suffered abuse during the time in which he occupied positions of great responsibility in the church.

The final words of Benedict’s ‘penitential act’ were not for the judgment of the Catholic Church, or the world, but in the afterlife. “Quite soon, I shall find myself before the final judge of my life,” the 94-year-old pontiff wrote.

“In light of the hour of judgment, the grace of being a Christian becomes all the more clear to me. It grants me knowledge, and indeed friendship, with the judge of my life, and thus allows me to pass confidently through the dark door of death,” he added.