(RNS) — Sen. Raphael Warnock of Georgia, an eloquent pastor, was correct when he said in his first speech on the Senate floor last spring, “Democracy is the political enactment of a spiritual idea.”

That spiritual idea of a more perfect union is now in jeopardy. How we respond to our nation’s brokenness is our choice, and our challenge.

No doubt, brokenness can create a void filled with fear. Pope Francis noted this on his visit to Athens, the birthplace of democracy, in December, when he warned that “the siren songs of authoritarianism” are luring in the discontented. Though “populism’s easy answers appear attractive,” he said, he advocated for a politics that does not instill fear, but one that calls for the common good.

It is the spiritual idea of a diverse nation working together for the common good that is at the heart of our democracy. We cannot turn a blind eye to our national failings of the past and present, but if we are to have a government of the people — all people — we need to pursue a communal quest for the whole.

While working on a book last year called “Hunger for Hope,” I realized that hope is a communal virtue. If I or any of us are feeling hopeless, it is because we are isolated and not connected with others. It does not take much to change that isolation, but it does take having the courage to create space in my life to learn from others.

In 2019, when I was the executive director at Network, a social justice organization founded 50 years ago by Catholic sisters to promote justice and dignity for all, we held a series of roundtables in rural areas of the United States to learn about the reality of life there. Each one was eye-opening for me, a city girl.

In just about every one of the 17 roundtables we held, when I asked, “What do city girls get wrong about country living?” someone in the group would say, “City folk think country people are dumb and uneducated, and it’s not true.” I told the city folks this is what I heard, and it broke my heart when the city folks said, “Well, it’s true. They are dumb and uneducated.”

I was shocked to find out that city folks judged country folks so harshly. The pain of this judgment and others sets up the alienation and isolation that are eroding the foundation of our democracy. The experience underscores that we all have a part to play in healing our nation’s divides.

If we are to heal the heart of our nation and save our democracy, each of us is called to exercise the virtue of holy curiosity. This curiosity demands that we each step back from our preconceived judgments and engage in conversation with others. Being curious means not feeling so threatened that I need to lash out and you do not feel so cornered that you lash out either.

Our American democracy needs to be built on respect for each other across the many divides — geographic, racial, religious, as well as a score of “isms.” Where we meet in this diverse nation is in living the constitutional idea of being We The People. This sacred idea is in jeopardy and is the challenge of our time.

Faith leaders are among those most equipped to take up this call to engagement and healing. We have an important role to play as we engage with people from all walks of life. We have the capacity and the call to create community that moves beyond the sins and failings of our nation’s founding.

We leaders in faith communities are called to reject our nation’s original sin of slavery and white privilege and work to include all residents in our democracy. We are called to reject efforts to suppress the vote and change how votes are counted that leave out whole segments of our society.

Our responsibility is not a political ministry, but rather a faith ministry rooted in the reality that we are called to create a community where all can flourish. This kind of faithful leadership gives me hope. It connects us beyond the hyperpartisanship and into a community where this spiritual idea of democracy can find fertile ground.

RELATED: How Biden’s faith-based office has advanced his vow to heal the soul of the nation

My friend Rabbi Sharon Brous recently shared with a group of us where she finds hope. She quoted Psalm 126: “Those who sow in tears, reap in joyous song.”

Rabbi Brous reminded us that “we have wept sacred tears, crying out for justice and equity, love and fairness. Those tears have not been wasted. For years, our tears have cultivated the soil for transformation, making it possible for a true multiracial democracy to one day flourish. So I remain hopeful, knowing that yesterday’s tears will one day bear the fruit of the beautiful world yet to be born.” 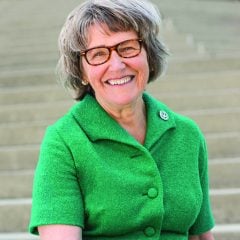 (Sister Simone Campbell is an author and founder of Nuns on the Bus; former executive director of Network Lobby for Catholic Social Justice; and an Auburn Senior Fellow. The views expressed in this commentary do not necessarily reflect those of Religion News Service.)