(RNS) — Two faith groups that have long supported the Boy Scouts of America have committed to take key roles in the scouting organization’s latest bankruptcy reorganization, the fallout from tens of thousands of claims of sexual abuse in its ranks.

The United Methodist Church and The Church of Jesus Christ of Latter-day Saints appear as “contributing chartering organizations” listed in the massive plan released in mid-February that is expected to be considered by a U.S. bankruptcy court on March 14. Between them, the two denominations plan to contribute $280 million toward a proposed settlement that could exceed $2.7 billion.

“The Church of Jesus Christ has reached agreement on a chapter 11 plan that is supported by the vast majority of survivors and their counsel, including the official committee representing abuse survivors and the representative for future abuse survivors, Boy Scouts of America, and a number of participating insurers,” said Eric Hawkins, a spokesman for the faith group known as the Mormons, in a statement to Religion News Service.

The LDS church halted its affiliation with the BSA in 2019, choosing to create its own global youth development and leadership program, prior to the bankruptcy proceedings.

The United Methodists announced in December that they and the BSA had reached an agreement tied to the settlement.

The official committee representing survivors of childhood sexual abuse in the BSA announced its support of the revised plan, released Feb. 10, saying that it believes it will enhance child protection and increase compensation for survivors. It suggested that those survivors who had voted against the previous version of the plan change their vote to accept the revised one. 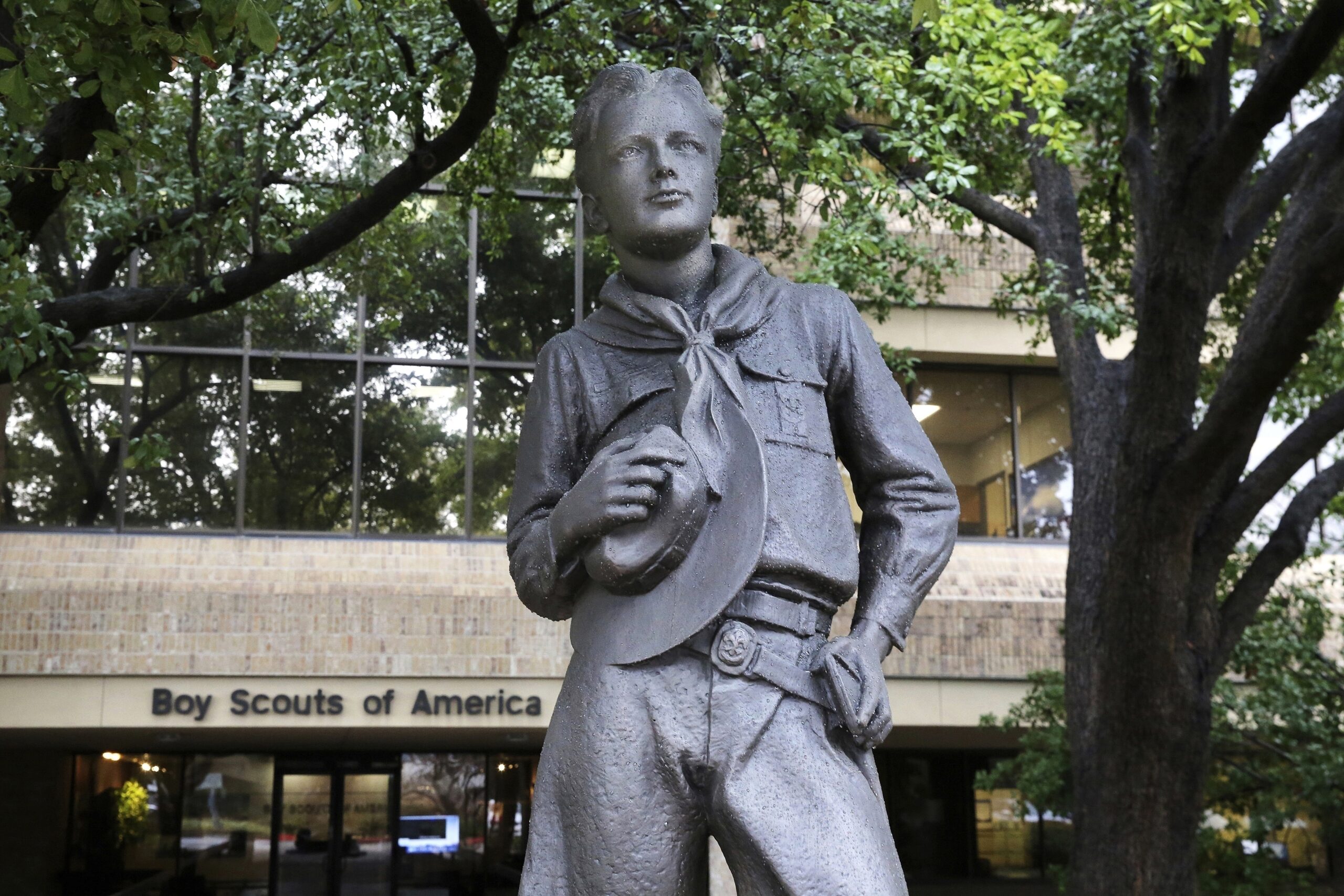 A statue stands outside the Boy Scouts of America headquarters in Irving, Texas, on Feb. 12, 2020. (AP Photo/LM Otero, File)

“In collaboration with BSA leadership, we are developing a new set of documents to guide the relationship,” he said in a statement to RNS. He said United Methodist churches’ charters, or official ties, with troops that had been in effect until March 31 have been extended through June 30.

The United Methodists announced in December that they would raise and contribute $30 million over a three-year period to help fund the compensation of abuse survivors.

“If the plan is approved through the trial set to begin March 14, claims against United Methodist congregations and entities will be channeled to the Survivor Trust Fund,” United Methodist Bishop John Schol told RNS in a statement.

Schol has chaired the United Methodist Church’s leadership team that has supported the chartering organizations within the denomination as the bankruptcy proceedings have continued.

Faith groups’ ties to the Boy Scouts have in some cases — including the Methodists and Mormons — existed for more than a century.

“Religious organizations have been one significant part of the backbone of the Boy Scouts of America,” said Los Angeles lawyer Paul Mones, who was co-counsel on the case that brought the largest punitive-damages verdict against the BSA when a jury awarded a 38-year-old former Scout $19.9 million in 2010. 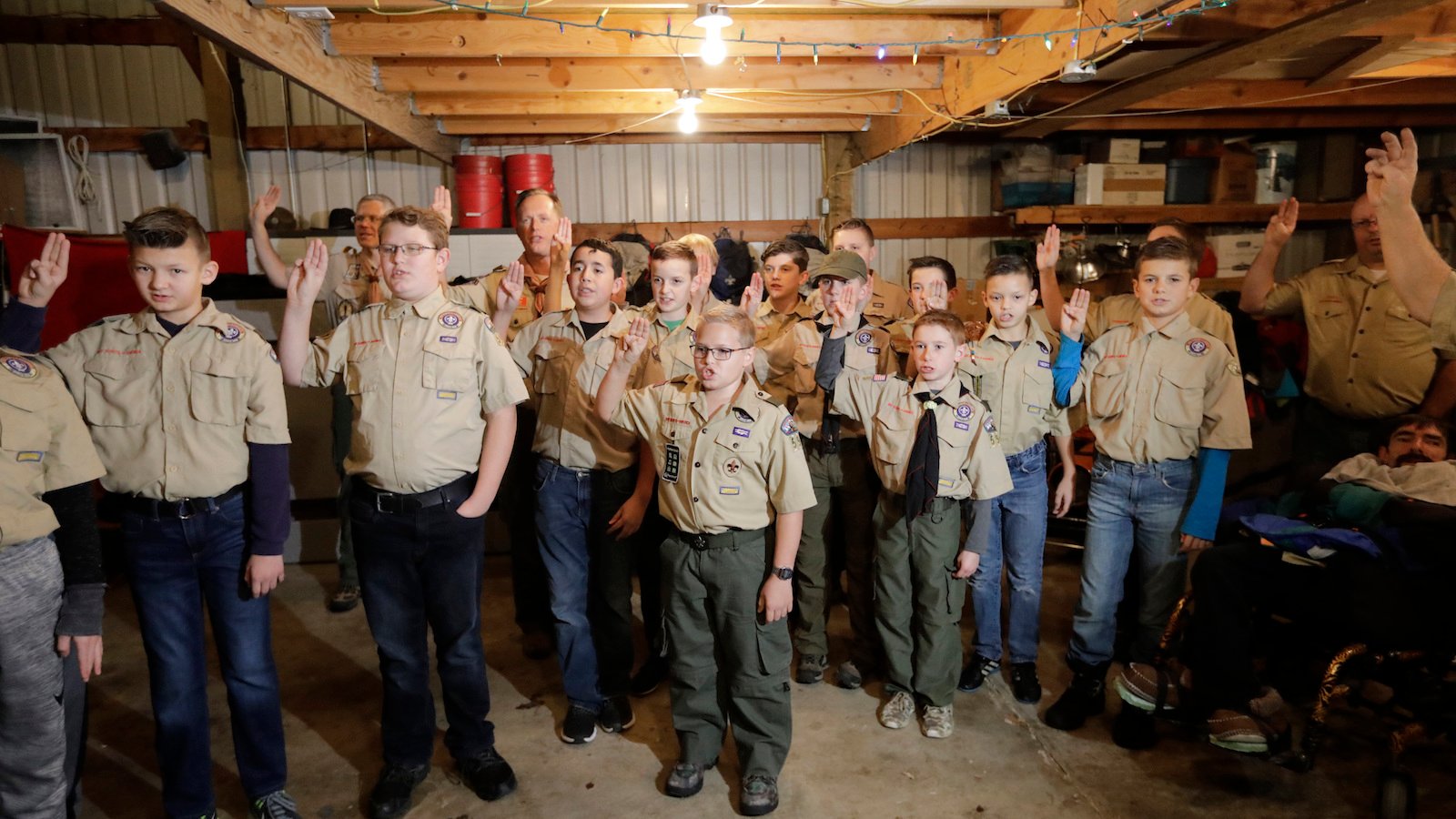 In this Dec. 12, 2019, photo, a Boy Scout troop gathers for a meeting in Kaysville, Utah. For decades, The Church of Jesus Christ of Latter-day Saints was one of Boy Scouts of America’s greatest allies and the largest sponsor of troops. (AP Photo/Rick Bowmer)

Other religious institutions “may have liability and they’ll have a year after the plan goes into effect to see if they want to make some kind of settlement with the trust in order to get protection,” said Mones.

“I am sure that the Boy Scout bankruptcy came as a complete shock to most of them and they were caught off guard.”

Some religious groups, including the United Church of Christ, have not taken a position on the plan.

“The congregational polity of the UCC is such that chartering BSA units happens at the discretion of each local church,” the Rev. Michael Schuenemeyer, a UCC executive whose office includes the UCC Scouting Working Group, told RNS. While the national UCC has a memorandum of understanding with the BSA for its support of Scouting, “there is no centralized governance or administration with our local churches concerning the chartering of BSA units.”

UCC general counsel Heather Kimmel told RNS that local congregations should seek the advice of their attorneys and insurers about how to react to the BSA’s new plan.

“How the plan affects a Local Church will depend upon the facts and circumstances surrounding any scouting abuse claims against the Local Churches and the elections that the Local Church has made under the Plan,” she said in an emailed response to RNS.

Brotherhood Mutual Insurance Co., an insurer of Christian ministries, said it has received dozens of inquiries from ministries about the BSA bankruptcy filing and has posted answers to frequently asked questions on its website.

The chair of a Roman Catholic ad hoc committee, which includes several dioceses and archdioceses and was formed to support the Catholic Church’s interests during the BSA bankruptcy process, declined to comment Monday (Feb. 28) and referred questions to its lawyer, who did not immediately respond.

The BSA did not directly respond to an inquiry about the status of such negotiations but told RNS in a late February statement that it has “been focused on ensuring that Chartered Partners are fairly represented and that they can continue to support Scouting.”

Schol said the Methodist committee hopes other groups will support the plan.

“If these organizations are sued, they will have to defend themselves in court,” he told RNS. “United Methodists have and continue to support the release of all charter organizations, and we encourage them to join for the healing of the survivors.”