(RNS) — On Saturday (March 12), 19 rabbis from the New York region boarded a flight to Warsaw and from there planned to travel to the Ukrainian border to deliver medical supplies and offer comfort to Ukrainians fleeing their country.

Their 48-hour mission to Poland, organized by the UJA-Federation of New York, is just one of many quickly organized to help Jewish and other Ukrainian refugees.

Some 2 million Ukrainians, mainly women and children, have fled the country as Russian forces widen their ground offensive. Jews, who have lived in Ukraine for more than a millennia, are taking an intense interest in the fate of the nation under siege.

Thousands, if not millions, of American Jews can trace their ancestors back to Ukraine and feel a special connection to the place, even as it also evokes a complicated history of persecution. Between 1.2 million and 1.6 million Jews were killed in Ukraine during the Holocaust.

“In a way this feels more personal than other crises in the world,” said Rabbi Joel Mosbacher of Shaaray Tefila, a Reform congregation in New York City who traveled to Poland Saturday. “I’d like to think my ancestors can be proud, not only that Judaism is still alive, but that we can both remember and move past our history to help people in need.”

The Jewish Federations of North America is also sending a delegation to Poland on Tuesday. The JFNA, an umbrella organization of Jewish philanthropic agencies, announced Friday that it had raised $24.5 million to help the Jews of Ukraine, variously estimated at between 50,000 and 200,000.

The feelings of solidarity with Ukraine have only heightened with daily news reports about the tenacity and courage of its president, Volodymyr Zelenskyy, who is also Jewish.

Jewish life across Eastern Europe and Russia had seen a slow rebirth in the wake of the disintegration of the Soviet Union. In the years after the Holocaust, most Jews could not practice their faith outwardly, and any Jewish life that existed went underground. The growth of the Jewish institutions — synagogues, schools, community centers — had recently reached new heights.

No Jewish group has been more instrumental to that rebirth than the Chabad-Lubavitch movement. Its revered leader, Rabbi Menachem Mendel Schneerson (1902-1994), known as “the Rebbe,” was born in Ukraine and immigrated to the United States in 1941.

Under his leadership, Chabad-Lubavitch grew exponentially. Even before 1991, when Ukraine gained independence from the Soviet Union, Schneerson began sending emissaries to Ukraine in an effort to rebuild Jewish life there.

RELATED: A strike near Babyn Yar; but this time Jewish acceptance in Ukraine is growing

Up until the start of the war last month, Chabad had 192 married Jewish couples (a total of 384 representatives) living and working in 32 Jewish centers across Ukraine, said Rabbi Motti Seligson, a Chabad spokesperson.

Dnipro, Ukraine’s fourth-largest city and where Schneerson once lived, now has the biggest Jewish community center in Europe. It’s called Menorah Center because its buildings take the shape of a seven-branched menorah.

“The backbone of Jewish life in Ukraine is Chabad,” said Seligson, who is based in New York.

The organization, which represents the devout mystical strain known as Hasidism, may be the only Jewish institutional presence in Eastern Ukraine. In the past two weeks, many of its rabbis there have fled with their congregants.

Chabad’s Ukraine network is working furiously to help remaining Jews leave. It has spent $12 million to do so and is raising more through its Ukraine Jewish Relief Fund.

Chabad rabbis in the breakaway republics of Donetsk and Luhansk have already evacuated via Romania, as have many other rabbis living in Eastern Ukraine. Those remaining are trying to convince others to leave.

“The vast majority in the east are choosing to stay,” said Seligson. “The challenge we’re facing is, how do we get people to agree to leave? How do you evacuate them, and how do you keep the ones that remain there alive?”

Israel is expected to absorb up to 5,000 Jewish Ukrainians and give temporary shelter to 20,000 non-Jewish Ukrainians. The country’s health ministry announced last week it was setting up an emergency field hospital in the Western Ukrainian city of Lviv.

Jewish refugees heading to Israel are mostly traveling through Romania; those fleeing to Western Europe and the U.S. are heading for Poland.

At least 3,000 Jewish Ukrainians have entered neighboring Moldova, and an estimated 3,000 more have entered Poland, Hungary and Romania, The Washington Post reported.

Mosbacher, who traveled with 18 other rabbis, said he wanted to learn as much as possible.

“The idea that we can bring some comfort, witness and resources to the border and bring important stories for people to hear back home is the top reason for going,” he said. 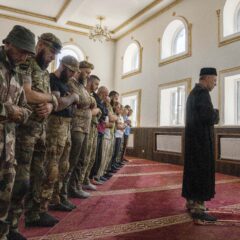 Catholicism
The patriotic Virgin: How Mary’s been marshaled for religious nationalism and military campaigns
Follow us on Facebook!
Submit your photos to RNS