VATICAN CITY (RNS) — Archbishop Vincenzo Paglia, who heads the Vatican’s think tank on life issues, arrived in New York Monday (March 28) hoping to disarm Americans’ well-defended positions on the topic by talking about what it means to be pro-life in the Catholic Church today.

“Sometimes, in the United States, but not only there, the pro-life perspective has been narrowed in an ideological way, which addresses aspects of life that are certainly important, but can’t be disconnected from everything else,” Paglia, who heads the Pontifical Academy for Life, told Religion News Service in a phone interview Friday (March 25).

Pro-life issues, and specifically abortion, have been among the most divisive battlegrounds in the United States, with both sides of the debate seemingly entrenched in a battle, from courts to elections to dinner tables.

But according to Paglia, America’s robust debate is exactly why it is important for him to visit the “very delicate and sometimes polarized laboratory” that is the United States.

Paglia will meet with Cardinal Timothy Dolan of New York and travel to Washington to visit Archbishop Christophe Pierre, the Vatican representative to the United States, and Cardinal Wilton Gregory before returning to Rome April 1.

The archbishop will also meet with the Catholic lay movement of St. Egidio, which has focused on helping migrants and refugees, to build on his efforts to provide aid to beleaguered countries in South American and Caribbean countries. He will speak to representatives of SOMOS, a network of 2,500 physicians from the Bronx, Queens and Manhattan, to provide health care for Medicaid recipients.

In Washington, Paglia will sit down with IBM representatives to discuss the ethics of AI, following up on the academy’s 2020 “Call for AI Ethics” in partnership with Microsoft, FAO and pioneering tech companies.

He hopes that a dialogue in the United States will help to “get rid of the debris that prevent us from seeing eye to eye, or better yet to develop and promote dialogue and not just accusations,” said the archbishop.

“I am convinced this can happen, and I don’t think this will be my last trip to the United States. It’s certainly part of a series of meetings I will organize for the near future,” he added. 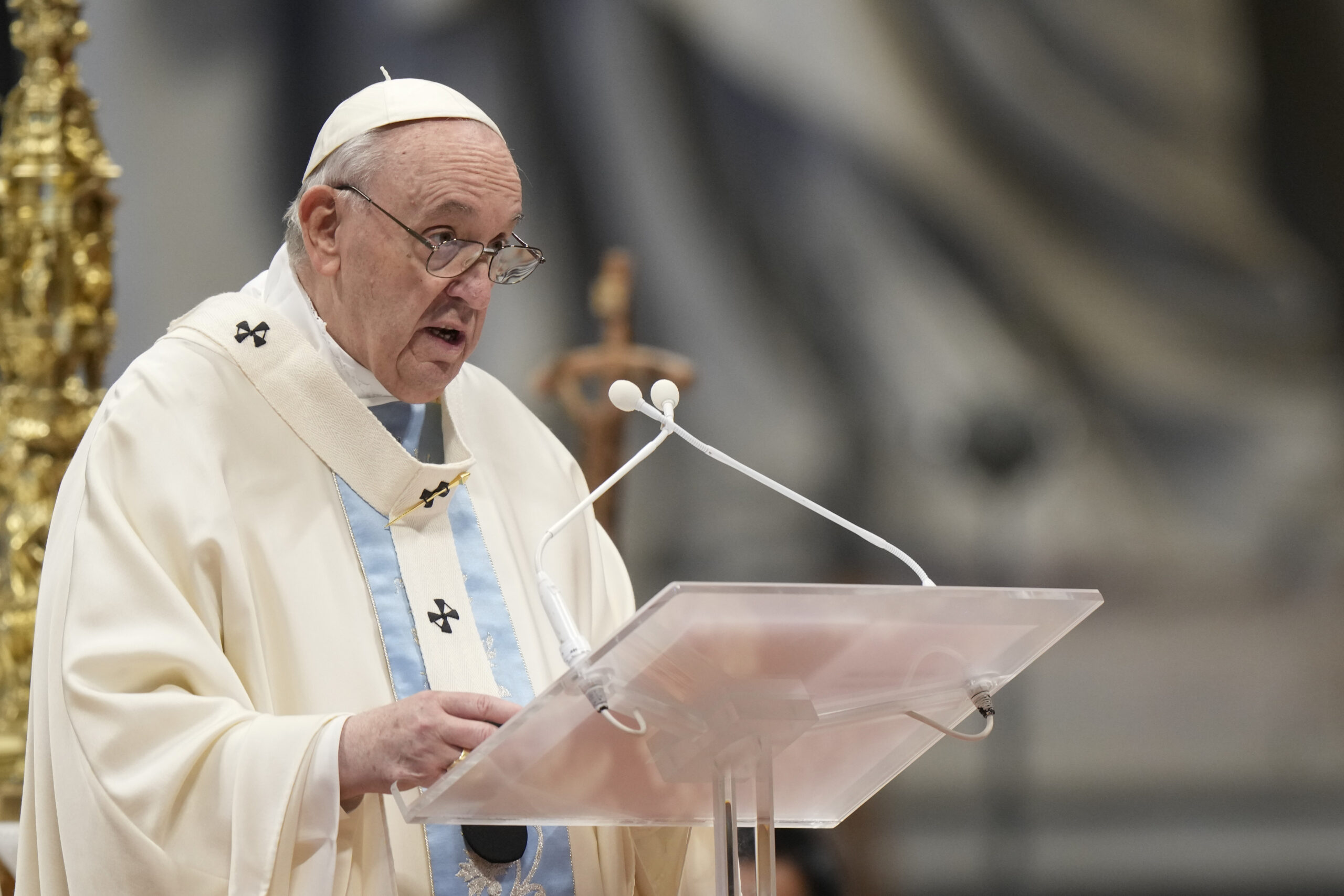 Pope Francis delivers his homily as he celebrates a Mass for the solemnity of St. Mary at the beginning of the new year, in St. Peter’s Basilica at the Vatican, Saturday, Jan. 1, 2022. (AP Photo/Andrew Medichini)

Abortion has been the primary topic of the pro-life conversation for decades, but when Francis became the head of the church in 2013, he began promoting a broader interpretation of what being a pro-life Catholic actually means.

The consistent life ethic, a concept born in the early 1970s and sometimes called the “seamless garment philosophy,” suggests that Catholics committed to protecting human life must do so consistently wherever life is threatened — standing up for migrants, prisoners on death row and indigenous peoples struggling due to climate change — with the same passion with which they defend the unborn.

Paglia explained that this holistic view could provide Americans an alternative to their entrenched positions on life issues. “Us believers are all against abortion of course, but to be credible we must state that we are against the killing of children, against the death penalty, against war, against abandonment and the discarding of the elderly,” he said.

“If we only look one way, you incur the risk of becoming crosseyed,” Paglia said. “Instead, we must broaden our view to see the entire horizon.”

While the archbishop lamented how being pro-life has been shrunk to “a single prospective,” he dismissed the possibility that the Vatican would get involved in ongoing legal and political developments concerning human life in the United States.

“The academy does not follow the developments at the (U.S. Supreme) Court and the possible overturning of Roe v. Wade and pro-choice legislation in the United States,” Paglia said.

Asked about the proposal by some U.S. bishops to ban Catholic pro-choice politicians, including President Joe Biden, from receiving the Eucharist, Paglia said there is not much more to add. “The pope has already provided a very clear answer and there is no need to add anything else,” he said, referring to Francis’ claim that he has never denied Communion to anyone at Mass.

“I have more important things to think about,” Paglia said.

While John Paul II and other previous popes have expanded the church’s commitment to the seamless garment, the Pontifical Academy for Life has weathered backlash since Francis overhauled its membership in 2016 to reflect his own broad pro-life vision. Recently the academy has stood in favor of COVID-19 vaccines, addressed the challenges posed by the development of AI and spoken on behalf of the poorest.

While his U.S. visit is not aimed at quelling criticism for its COVID-19 policies, neither is Paglia shy about asserting the Vatican’s views. Asked about American prelates, such as Texas Bishop Joseph Strickland, who have been openly critical of vaccines, Paglia called for an examination of conscience.

“Everyone must place themselves before God, before the pope, and make their own choice. It’s not for me to judge,” he said, but added that the Vatican and the academy have been clear: Vaccination is a show of responsibility toward oneself and toward others, and Francis has described getting jabbed as “an act of love.”

According to academy spokesperson Fabrizio Mastrofini, Paglia is not afraid of countering criticism from American conservatives. “I think that one must hope, even against all hope,” he said, adding that “what may seem impossible to people is possible to God.”